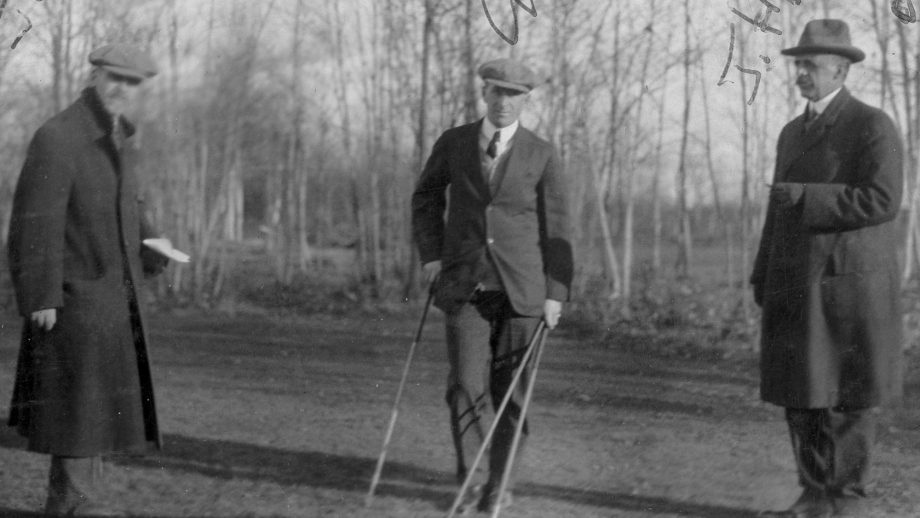 Judge Weir, Albert Murray and J.H. Birks on the Kanawaki Golf Club circa 1914, taken from the A. Murray scrapbook.

While researching for a book about his grandfather and great uncle, author Ian Murray came across the prolific golf writings of Robert Stanley Weir.

Weir wrote about golf for 23 years and gained an international reputation in his pursuit of understanding the specific skills needed to become a competent player. Respected by his peers, Weir was recruited as a feature writer and book reviewer for the American “Golf Illustrated” magazine that was launched in 1914.

Weir began writing about the game early in the 20th Century for “Golf Magazine”, the official publication of the United States Golf Association.  His first article in 1902, Pioneer Golf in America, provides the only known description and photos of the course where golf was first organized and played in North America in 1873. The course was located below the slopes of Mount Royal, known as ‘Fletcher’s Field’, in Montreal. It would become the Royal Montreal Golf Club.

Along with writers and players who were at the forefront of the sport, now legends in the game, Weir continued writing for “Golf Illustrated” until his death in 1926 in his 70th year.

“The Canadian Golf Hall of Fame and Museum is happy to bring Weir’s golf writing to life on their website where over 75 articles written by Weir can be read.  “We have no doubt that more of Weir’s writings will resurface with the growing age of digitization,” notes Meggan Gardner, director of heritage services for Golf Canada.  “It was because of such amazing online resources such as our own Canadian Golfer magazine, the USGA Museum and LA84 that golf history has been rewritten with this discovery.”

Robert Stanley Weir was a judge, poet, professor and literary writer. He published two books of poetry and wrote articles for U.S. and Canadian Magazines. He married in 1882 and had 6 children. Renowned as an expert in Municipal law, Weir wrote various Legislative Acts for the Province of Quebec.

The full article along with Weir’s writings can be found here.