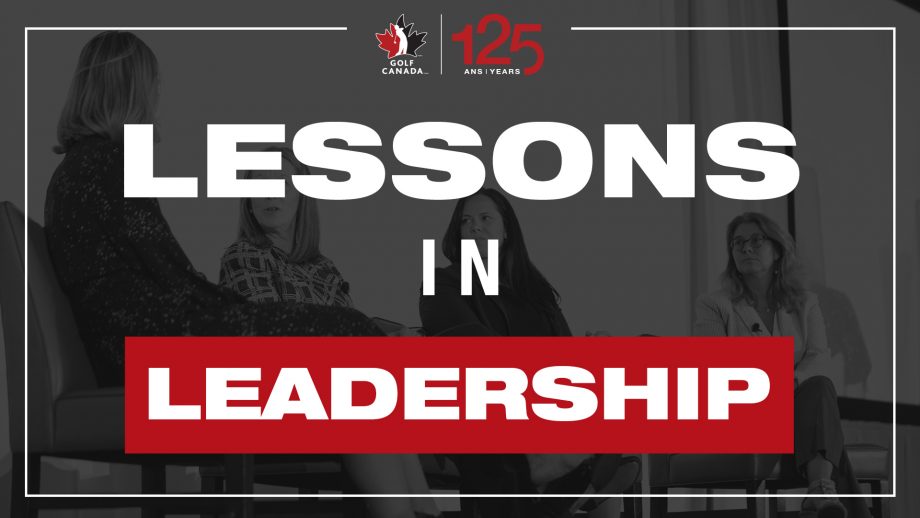 <![CDATA[In the summer of 2013, at just 15-years-old, a young golf prodigy of Smiths Falls, Ont., was entering the final round of her third LPGA Tour event. A future Canadian golf star, Brooke Henderson was paired with Canadian golf legend Lorie Kane. Walking up to the final hole of the tournament, surrounded by Canadian fans at the Manulife Financial LPGA Classic held in Waterloo, Ont., Kane grabbed Henderson’s hand. “I remember the feeling I had when I took [Brooke] by the hand,” Kane said. “I was saying to myself, whether I said it to [Brooke], ‘you are the future’.” Flashforward to the summer of 2020, where Henderson appears alongside Kane at the CP Women’s Leadership Summit, no longer as the rookie and the veteran, but as two Canadian women in golf paving the way for future generations of women in sports. Kane’s gesture of grabbing her hand was a subtle act, but it’s a moment that’s stuck with Henderson all these years later. “That was just an incredible moment for me,” Henderson said. Listening to the Summit, it became clear that moments like these; moments of pure, genuine leadership that may not seem like much at the time, can make dramatic impacts on the lives of the people influenced by them. On Sept. 1, a diverse panel of women in positions of leadership came together for the third annual CP Women’s Leadership Summit. This year though, things were a little different because of COVID-19. Organizers pivoted to host the event virtually to accommodate safety restrictions with in-person gatherings. <figure class="wp-block-image size-large"> 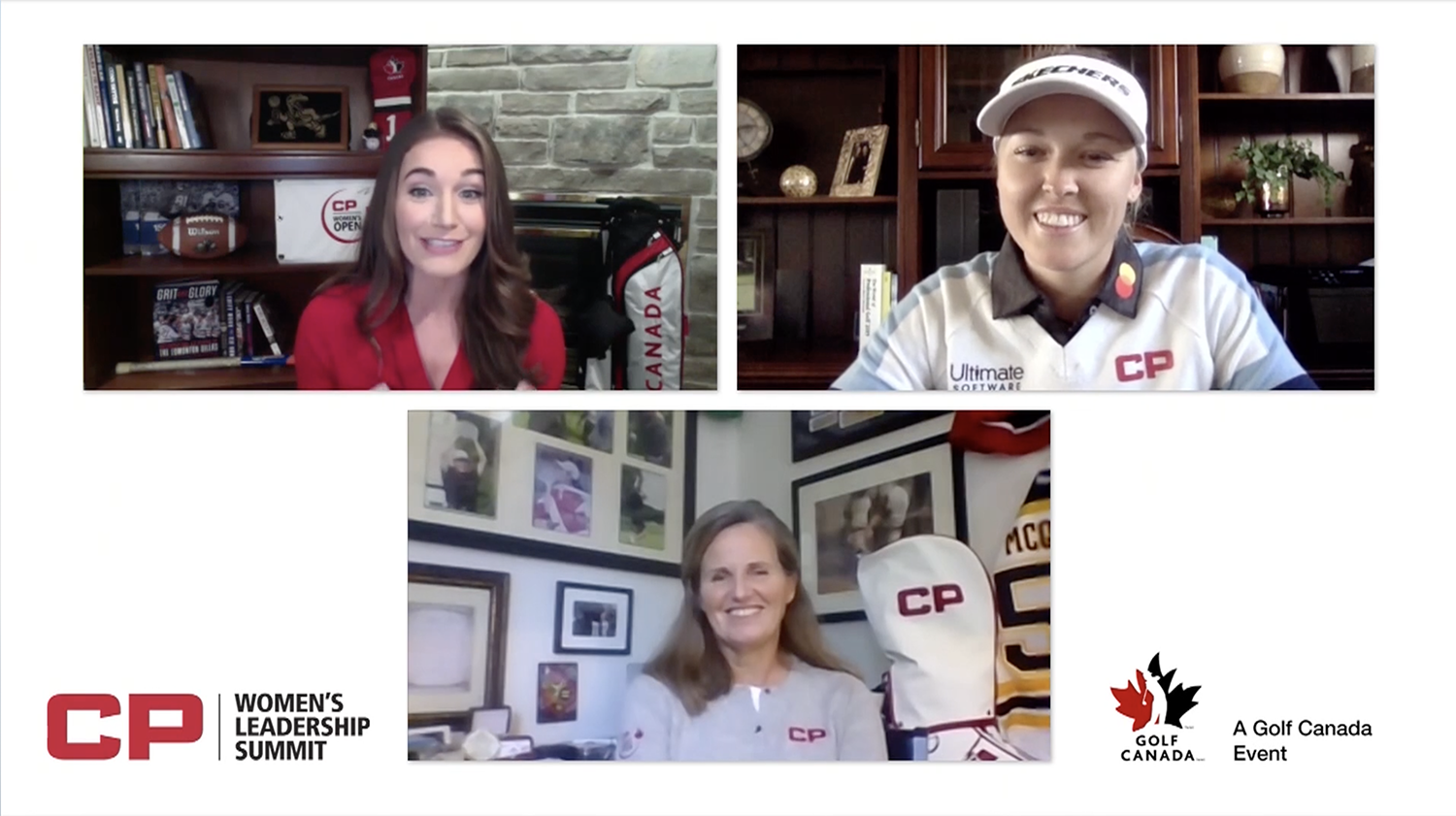 Hosted by TSN anchor Lindsay Hamilton, the goal of the event was to provide inspiring stories and a networking opportunity, while also accepting donations for the BC Children’s Hospital Foundation. While the networking component wasn’t able to flourish like it has in the past, the Summit was “a success story for us” according to Mary Beth McKenna, the assistant tournament director of the RBC Canadian Open who has co-led the event since it began three years ago. The event was divided into four sessions, each with different women discussing their experience as leaders in their respective positions. Speakers included Canadian golfers Kane and Henderson, and Olympians Marnie McBean and Perdita Felicien, among other prominent women in leadership positions. A three-time Olympic Gold Medalist and Canada’s chef de mission for the 2020 (though postponed to 2021) Tokyo Summer Games, McBean knows a thing or two about leadership. Though, even McBean indicated she’s always actively learning how to be a better leader. As the Summit’s first speaker, McBean spoke about her early days with rowing teammate Kathleen Heddle, and how it wasn’t necessarily the match made in heaven their later results would make it seem. “I actually actively worked for a long time to get into a different boat because I didn’t think Kathleen had what it took because she was introverted, she was calm and quiet,” said McBean. “I was like, well, that’s not what a champion is.”

It was encountering someone with a personality and working style different to her own that McBean said taught her an important lesson on teamwork and leadership. McBean quickly learned that welcoming “the diversity of the personalities in the boat” would be crucial to their success. “I learned to accept that as long as I stopped trying to make Kathleen me, and I let her be her authentic self, she’s extraordinary,” McBean said.

The overarching message on leadership from McBean was this: humility and communication. It was a theme that seemed to find its way into separate discussions by all the speakers throughout the two-hour Summit.  Humility and the openness to continue learning and growing was a key aspect of Olympian Perdita Felicien’s discussion on overcoming adversity and her experience as a black athlete. “It’s lifelong learning, it’s lifelong commitment,” Felicien said on how to be an ally. “I’m also learning, I’m also figuring it out.” Felicien said she’s had conversations with friends who are white, who’ve called or texted her to say that they want to listen and learn about being an ally. “They want this to change. They might not know exactly how, but they are here, and they are at the table and they are deciding, ‘you know what: enough is enough’,” Felicien said. The session prior, with Candy Ho, CEO of The Cape on Bowen Community Development and Pam Arpin, assistant vice president, customer and corporate Services at Canadian Pacific Railway (CP) focused on the importance of communication. Arpin discussed how she worked on having successful communication with her employees at the beginning of the pandemic when CP was deemed an essential service and many employees continued working at the office. Arpin said she focused on making sure her employees knew that she was always available despite the fact that she didn’t necessarily have the answers they were looking for. She said it was important, “because any void in communication, people are going to fill up that void with their own speculation.” Arpin said she thinks it was a missed opportunity “if you haven’t grown as a leader through this.” It’s that aspect of humility and the willingness to grow that both Arpin and Ho emphasized in their discussion together. It was apparent that no matter what leadership role you’re in, from CEO to a veteran golfer, being a leader transcends it all.

“We just have to be humble, have that mindset for growth, and then no barrier is a barrier, they’re all opportunities,” Ho said when asked about obstacles she’s encountered in her own career.

While it may have been possible to view the postponement of the CP Women’s Open and the restriction from having an in-person Summit as a barrier, instead the CP Women’s Leadership Summit went on, taking advantage of the unique situation. McKenna admitted that having to do the Summit virtually this year was a curveball, but it also opened up new opportunities. “We had people attend outside of Canada, so you didn’t necessarily have to be in the marketplace to enjoy these great speakers,” said McKenna. Usually in a space-restricted setting, the event has around 275 attendees, according to McKenna. This year, however, she said there were over 1,100 registrants from various countries. [caption id="attachment_100310" align="alignnone" width="1100"] Canadian Pacific staff tuning in from HQ in Calgary[/caption] McKenna also said that everything went seamlessly for the Summit, and she wants to carry that momentum into next year, with the hopes that it can be done in-person if it is safe to do so. The key takeaway from the Summit is this: what defines a successful leader is not just one thing, on one occasion, it’s finding humility, and it’s about keeping an open line of communication, even when you don’t necessarily have the answers. And it’s about the small, subtle acts of understanding and empathy, like taking the hand of a 15-year-old walking up to that final hole, despite being her competitor. Henderson said that golf can teach people a lot of life lessons. “I feel like almost every day is a challenge out there,” said Henderson. “But that’s part of the reason why we love it.” The truth can be said about life and leadership, as well. ]]>