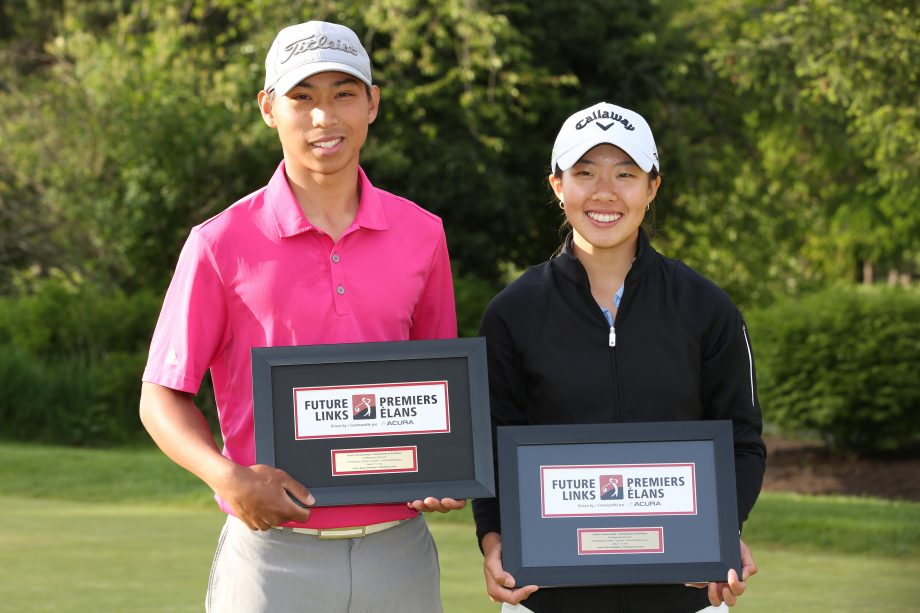 PITT MEADOWS, B.C. – Lauren Kim fended off competitors five years her senior and held on to a second-round lead, while Michael Crisologo won in a playoff to earn medalist honours in their respective divisions at the Future Links, driven by Acura Pacific Championship at Pitt Meadows Golf Club.

Kim, 13, rocketed to the lead by knocking in six birdies in round two. The Surrey, B.C. native shot a bogey-free round on Sunday, finishing at 6 under during the 54-hole event, one shot ahead of Euna Han in second place.

“I feel really good about myself,” said Kim. “My best hole out of the entire round was the sixth hole. I thought I was going to make a bogey because I went into the trees. I made the putt for a [par] save and I was really shocked, but I feel that really helped me stay calm.”

Narrowly missing the top five was Céleste Dao. The Team Canada Junior Development Squad member led after 18 holes, but ultimately finished in sixth place at 2 over. Dao’s Team Canada teammate Ellie Szeryk joined her in the top ten by carding a 6-over 74.

It was a stunning finish in the boys’ division, as Crisologo and Laurent Desmarchais both put together impressive final rounds and finished tied at 5 under on the tournament. A playoff was needed to decide the winner, and Crisologo birdied the first playoff hole to earn medalist honours.

“I’m super excited, I can’t really put it into words right now,” said Crisologo of Richmond, B.C. “[My family] watched me through all 18 holes, and it was good to have that support.”

It was a strong showing for the Team Canada Junior Boys Development Squad, as three of the five lowest scores were carded by team members. In addition to Desmarchais, Christopher Vandette and Jeevan Sihota finished tied for third place.

Along with the four lowest finishers, Ethan Choi of Pincher Creek, Alta. also earned an exemption into the Canadian Junior Boys Championship by shooting even par to round out the top five.