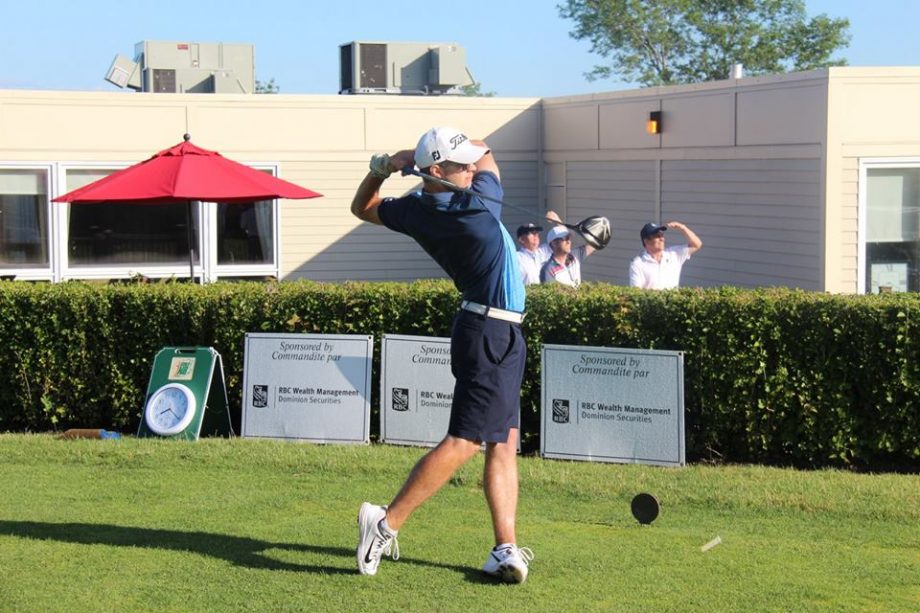 Day one of the 2018 RBC Dominion Securities Men’s NB Amateur Championship provided difficult scoring conditions as the wind made many holes unreachable during the opening round.

Earle’s first round 68 will put him in a prime position leading into Friday. His 1st round consisted of 5 birdies, 1 bogey and 12 pars. Tied for the lead with Earle is Fredericton’s Michel Landry, the 2016 RBC Dominion Securities NB Men’s Amateur and Mid-Amateur Champion had 8 pars, 6 birdies, 1 eagle, 2 bogeys and a double on route to his 68.

Earle is looking to capture his first ever RBC Dominion Securities NB Men’s Amateur Championship, while Landry aims to add to his previous victories and earn a spot-on Team NB for the 2018 Canadian Men’s Amateur Championship at Duncan Meadows Golf Course & Pheasant Glen Golf Resort in Duncan / Qualicum Beach, British Columbia. With one of the most experienced fields in recent event history, it will not be an easy task to conquer The Riverside Country Club’s fast and firm greens.

Sitting in 3rd place in the Amateur Division and 2nd in the Mid-Amateur Division is 2017 RBC Dominion Securities NB Men’s Amateur & Mid-Amateur Champion, Darren Roach of The Riverside Country Club. Darren recorded a first round 1-under par 71 to put himself in a solid position at the top of the leaderboard. Roach recorded 3 birdies, two bogeys and 13 pars on a windy and firm morning at The Riverside Country Club.

Daniel Kirby of JH Sports currently sits in 4th position after round 1 in the Amateur Division, Kirby’s round included 4 birdies, 4 bogeys and 10 pars on route to an even-par score of 72.

Rounding out the top of the leaderboard in the Mid-Amateur Division is Doug Malcolm of Hampton who shot a 2-over par 74 during round 1.

The second round of the 2018 RBC Dominion Securities NB Men’s Amateur Championship will get underway at 7:30am on Friday July 13th, with competitors all going off the first tee.

The top three finishers, along with the fourth-place alternate, in the Men’s Amateur section, will earn the opportunity to be members of Team NB and represent New Brunswick in the Willingdon Cup at the Canadian Men’s Amateur Championship, to be held from August 6 to 9, 2018 at Duncan Meadows Golf Course & Pheasant Glen Golf Resort in Duncan / Qualicum Beach, British Columbia. In addition to the Provincial Championship and the four positions on Team NB, Golf NB will also be allocating an additional five exemptions into the Canadian Men’s Amateur Championship to top finishers at this year’s event.

In addition to the positions on the Willingdon Cup Team, the top two finishers in the NB Mid-Amateur category (25 years and over) will earn positions on Team NB that will represent the province at the 2017 Canadian Men’s Mid-Amateur Championship, to be held from August 21 to 24, 2018 at the Victoria Golf Club in Victoria, British Columbia. The third and final position on Team NB, along with the first alternate position, will be awarded later this month at the 2018 NB Mid-Master Championships, to be held at the Royal Oaks Golf Club from July 23 to 25, 2018.

For more information on the The Riverside Country Club please visit: CLICK HERE.