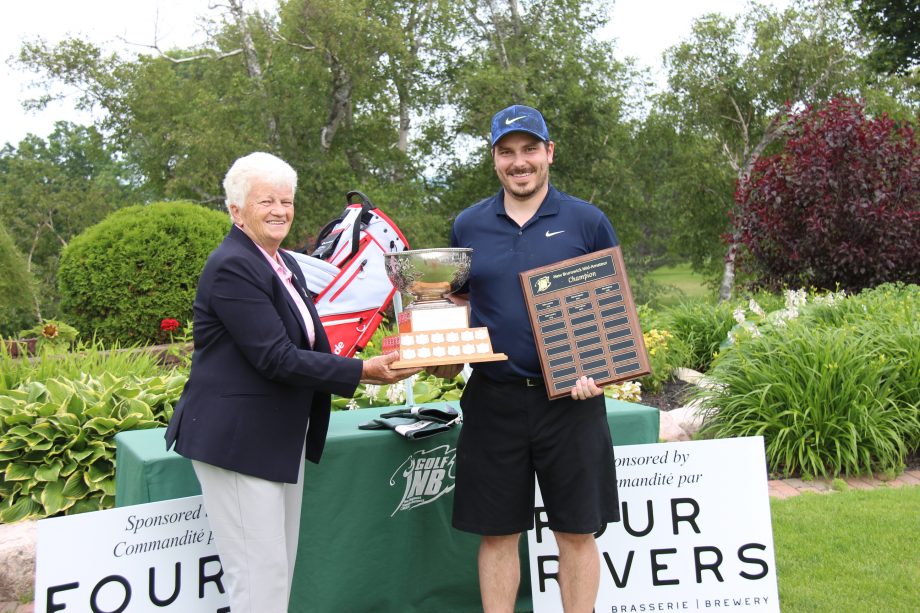 BATHURST, NB– Players began to arrive bright and early at the Gowan Brae Golf & Country Club for the final round of the NB Men’s Amateur Championship, Presented by Four Rivers Brewing Co. Sunday’s round would encapsulate all that the Par 72, C.E. Robinson Design has to offer. Demanding tee shots, pin locations requiring caution and precision, unpredictable winds off the Bay of Chaleur, and nerves would all play a factor in the outcome of Sunday’s final round.

With the overnight leader, Stuart Earle resting at 6-under, there were several players eager to get down to business. Sitting 4 shots back of Earle were Golf NB Public Player- Liam Llewellyn, Restigouche’s Darren MacPherson, and Danek Hadley, representing the host club of Gowan Brae. The trio all headed into Sunday’s round at 2-under par.

Earle sat in solo first at 6-under par, following an opening-round 67, and a 1-under, 71 on Saturday. Fredericton’s Michel Landry held second at 5-under following rounds of 66 and 73, and Riverside’s Brett Taylor remained two shots behind Landry after recording a 71 and 70 heading during rounds 1 and 2.

Players took to the course on Sunday with red numbers on their mind, an impressive nine players broke 70 during the final round. Leading those players was Gowan Brae’s Danek Hadley who signed for a stellar 7-under, 65. Fredericton’s Michel Landry finished a group behind Hadley, recording a 4-under, 68 pushing him to a three-round total of 9-under. Hadley’s aggressive play slotted him in a tie for first place with Landry.

Returning to the first tee, a sudden-death playoff was on for Landry and Hadley to duke it out for the NB Men’s Amateur Championship. Gowan Brae’s par-4 1st hole was the start and finish to the playoff as Landry calmly drained a birdie putt in front of his friends and family to solidify his victory.

The Riverside’s Brett Taylor finished second in the Mid-Amateur Championship after finishing at 7-under, 2 shots back of Landry.