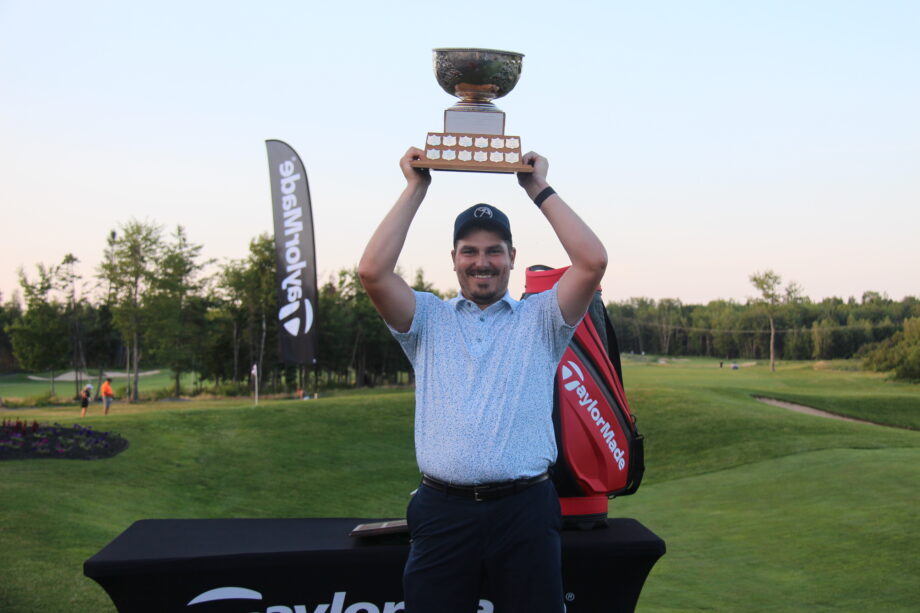 Fredericton, NB– Players began to arrive bright and early at West Hills Golf Course for the final round of the New Brunswick Men’s Amateur Championship, Sunday’s round would encapsulate all that the Par 72,  Huxham Golf Design Inc. has to offer. Demanding tee shots, pin locations requiring caution and precision, and nerves would all play a factor in the outcome of Sunday’s final round.

With the overnight leaders, Greg Steele and Mark Wedge both sitting at even par, there were several players eager to get down to business.

The leaders teed off at 2:57 PM. A powerhouse pairing, comprised of the Riverside duo of Mark Wedge and Greg Steele alongside 2002, 2016, 2019, and 2021 NB Men’s Amateur Champion, Michel Landry of the Fredericton Golf Club.

Closely following the final group on the leaderboard was Game #49 consisting of Moncton’s Colin Manning, the host club’s Peter Frenette, and 2010 and 2017 NB Men’s Amateur Champion, Darren Roach of The Riverside Country Club.

The final group made their way off the green of hole number 9, and we were headed to the back-nine with a 3-way tie with Greg Steele, of the Riverside Country Club who rallied an even par, 36, Michel Landry of the Fredericton Golf Club, who fired a 1-under par, 35, and joining them was Darren Roach of the Riverside Country Club who fired a tidy 3-under par, 33.

Players went to the course on Sunday with red numbers on their minds, leading those players was Fredericton’s Michel Landry who signed for a final round 2-under, 70. Coming close to the low round of the day at 3-under, 69 recorded by Riverside’s Sam Young.

Landry’s play would see him edge out the field and Riverside’s Greg Steele who spent the final round on Sunday in a shoot-out with Landry, finishing one shot back at even par.