Koepka handles the stress and reaps rewards of another major 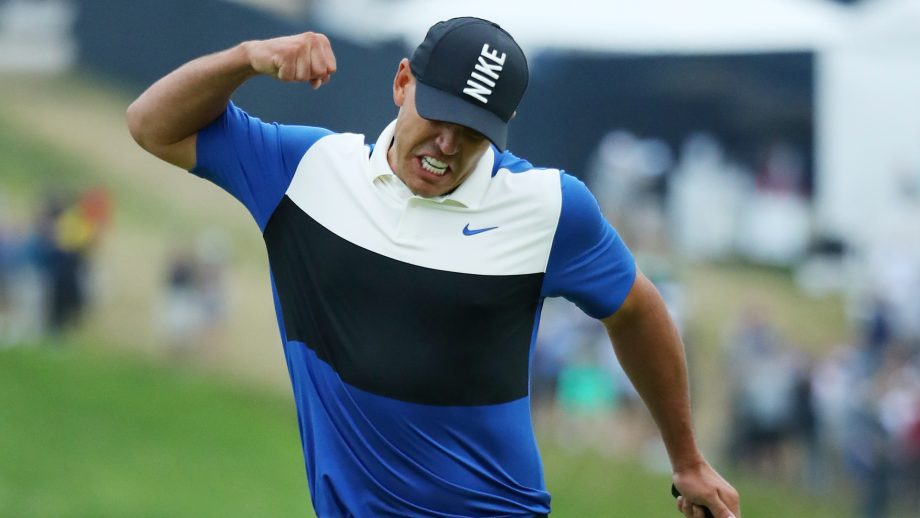 FARMINGDALE, NEW YORK - MAY 19: Brooks Koepka of the United States reacts after putting in to win on the 18th green during the final round of the 2019 PGA Championship at the Bethpage Black course on May 19, 2019 in Farmingdale, New York. (Photo by Warren Little/Getty Images)

FARMINGDALE, N.Y. – Brooks Koepka should know as well as anyone that nothing in golf comes easily.

His well-documented journey to the PGA Tour took him to remote outposts like Kenya and Kazakhstan. Even after Koepka won a second straight U.S. Open last summer, which no one had done in 29 years, it didn’t seem enough to be the first name mentioned among the next generation of stars.

And then he endured the toughest day of his career Sunday, which turned into the most rewarding.

“I’m glad I’ve got this thing sitting next to me,” Koepka said as he looked at the shiny Wanamaker Trophy. “It’s very satisfying, this one. This is definitely the most satisfying of all the ones I’ve won.”

Moments earlier, after he turned a potential meltdown into the kind of clutch play that has defined his career, Koepka draped his muscular arms around the top of the trophy and let out a deep sigh from stress and satisfaction, and then he smiled.

Congrats to @bkoepka on his #pgachampionship title defence. ?? ⠀ ⠀ With the win today, Koepka joins Tiger Woods as the only back-to-back winners of the PGA Championship since it went to stroke play in 1958.⠀ ⠀ See you next month, Brooks. ??

Koepka said at the start of the week that majors are sometimes the easiest to win.

This one should have been.

His seven-shot lead was down to one with four holes to play and the No. 1 player in the world – Dustin Johnson, his best friend in golf – was piecing together the best round of a final day in 25 mph gusts that made Bethpage Black as fearsome as ever.

Koepka answered with all the right shots. Johnson faded with two bogeys. Koepka closed with a 4-over 74, the highest final round by a PGA champion in 15 years, and he didn’t care how it looked.

Four years ago, he had one PGA Tour title in his first full season as a full member. Now he has four majors out of the last eight he has played, a stretch not seen since Woods won seven out of 11 after capturing the 2002 U.S. Open at Bethpage Black.

“I just don’t understand why he doesn’t do it more often,” said Rory McIlroy, who won his four majors in a span of 15. “He obviously gets into these mindsets of the majors, and he really goes and gets into a different state. You’d obviously have to ask him. But it’s awesome. It’s great to watch.”

Woods twice won back to back in the PGA Championship, with tight battles in 1999 and 2000, comfortable wins in 2006 and 2007. Koepka was starting to draw comparisons with Woods for the way he obliterated the competition at Bethpage Black, much like Woods used to do.

In the end, there were no style points, only the trophy.

But that trophy spoke volumes.

Even louder was the gallery, and it wasn’t always pretty. Koepka had a six-shot lead when he walked off the 11th fairway. When he walked up to the green on the par-3 14th, with his ball over the green and Koepka headed for a fourth straight birdie, the chants jarred him.

They weren’t for him.

“DJ! DJ! DJ!” the cheers rained down for Johnson, who was on his way to another birdie up ahead on the 15th hole to pull within one shot. Koepka says he was more shocked than he was nervous, but he heard them.

“It’s New York. What do you expect when you’re half-choking it away,” he said. “I think I kind of deserved it. I’ve been to sporting events in New York. I know how it goes. I think it actually helped. It was at a perfect time because I was just thinking: ‘OK, I’ve got everybody against me. Let’s go.”’

And off he went – a powerful drive down the 15th fairway that set up a par he desperately need, an even better drive down the 16th hole, the hardest at Bethpage Black during the final round because the wind was whipping into his face.

That’s where Johnson lost all momentum, without doing much wrong. He hit a 5-iron from 194 into the fan – he though about 4-iron because he wasn’t sure 5-iron would get to the green – and was stunned when it one-hopped into the rough. He chipped to 7 feet and missed the par putt, and then went long on the par-3 17th, caught another nasty lie and made another bogey.

It’s more than Koepka would have wanted. But he has the trophy, the one that caused the most stress and brought the most satisfaction. No sooner was the PGA Championship over that Koepka was installed as a 5-1 favourite to win the U.S. Open.

No one has won three straight U.S. Open titles since Willie Anderson in 1905. That might be all the motivation Koepka needs.