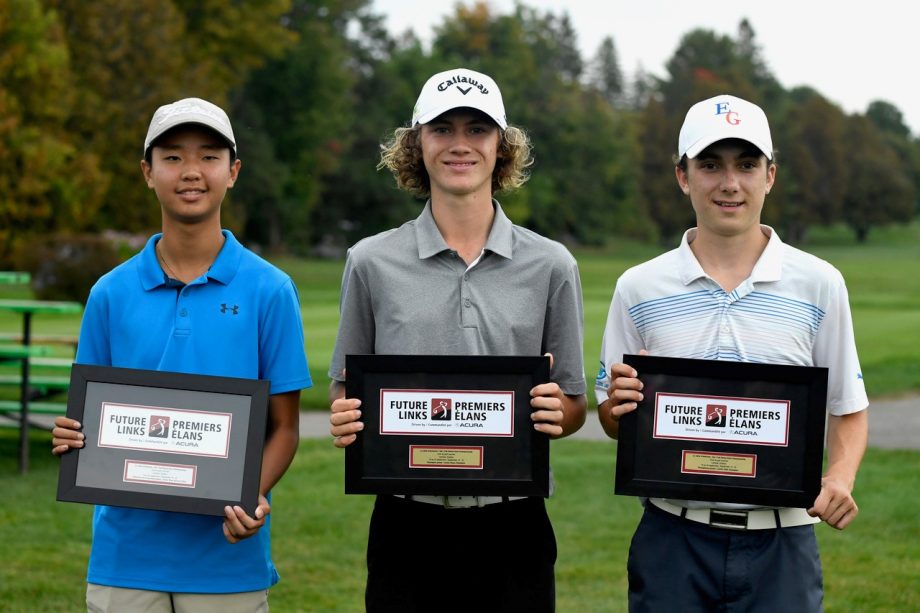 LACHUTE, Qué. — Erin Kim of Toronto kept her eye on the prize and held on to her 36-hole lead for a six-shot victory in the Junior Girls division while Jean-Philippe Parr of Saint-Célestin, Qué., managed to keep his rivals at bay to escape with the Boys title, as the first of two Future Links, driven by Acura Fall Series events concluded Sunday on course No. 1 at Lachute Golf Club.

Parr, who shot 73 on Sunday for a tournament best score of 213 (-3), had registered the day’s low score of 68 in Friday’s opening round to sit in the pole position, but he had to fend off some fierce competition both Saturday and during the final round to claim the laurels.

Parr narrowly beat a trio of contenders that finished T2 at 214 for the weekend, including Owen Kim of Oakville, Ont., Malik Dao of Notre-Dame-de-l’Île-Perrot, Qué. and Felix Bouchard of Otterburn Park, Qué. Thomas Latter of Mississauga, Ont., valiantly tried to catch the leaders by shooting the low round of the week, but his card of 67 still left him two shots back of the winner.

The three had to go in extra holes to break the tie in order to determine which two would receive exemptions into the 2020 Canadian Junior Boys Championship and it was Kim and Bouchard who prevailed. The 2020 Canadian Junior Boys Championship will be held from Aug. 10-13, 2020 at Rivershore Estate & Golf Links in Kamloops, B.C.

In the Girls division, it was a wire-to-wire victory for Erin Kim. The Toronto resident who plays her club golf at The Ladies Golf Club of Toronto beat her nearest rival by six strokes with a total score of 220 (+4), this despite notching her highest score of the week on final Sunday with a 78.

Finishing second was Sarah Gallagher of Burlington, Ont. who also shot 78 on Sunday for a total of 226 (+10) while Katie Cranston of Oakville handed in a final card of 76 to finish third at 227 (+11). All three have earned exemptions into the 2020 Canadian Junior Girls Championship, which takes place next July 28 to 31, at Club de golf de Lorette in Loretteville, Québec.

The competition marked the second year of the Future Links, driven by Acura Fall Series — two additional junior golf tournaments that were introduced last fall to increase the competitive offering for up-and-coming young players. The Future Links Championship series now features eight tournaments through the course of the season, each hosted in collaboration with the host club’s provincial association.

The second Fall Series event and final Future Links championship of the 2019 season will take place at Crown Isle Golf Resort in Courtenay, British Columbia, from Sept. 27 to 29.