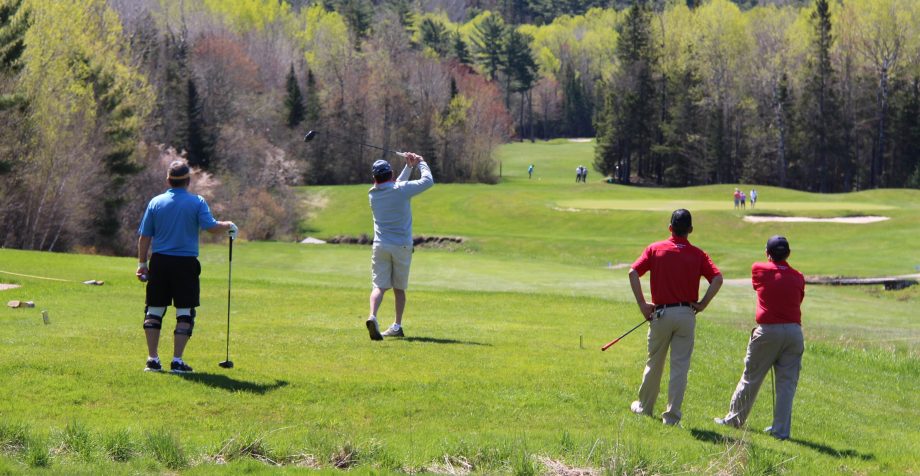 Second Round Pairings and Tee Times

Summer appears to have arrived at the Sussex Golf & Curling Club, at least for a day!  With the sun shinning and an ever-drying golf course, the team of Nathan Hogan of the Miramichi Golf & Country Club and his Shelburne, NS teammate, Teran Newell of the River Hills Golf & Country Club jumped out to an early lead that they would not relinquish.  The pair fired a blistering five under par (-5) first nine holes, courtesy of three birdies and an eagle, but would give two shots back on their second nine with bogeys on #11, #13 & #15 offset by a birdie on the par four 16th to post a first round three under par (-3) 69 on the Sussex Golf & Curling Club’s par 72 layout.

With the youngsters out in front, there is a long jam of veteran presence hot on their heels.  The Sussex team of Kris Leask and Duane Mitton sit just one shot off the lead after carding a two under par (-2), 70, by posting five birdies and three bogeys on the day.  Leask and Mitton will join Hogan and Newell in Sunday’s final pairing as both teams look to claim their first NB Men’s Four Ball title.  The three-time Ralph Costello Shield winners, as NB Men’s Four Ball Champions, Tony MacKinnon of the Fredericton Golf Club and Bob Brown of the West Hills Golf Course are locked in a four-way tie for third position at one under par (-1), 71, with the teams of Matt Masson and Mike LeBlanc of the Westfiled Golf & Country Club and the Hampton Golf Club teams of Doug Nutter and Colin Allaby and the father and son tandem of Darren and Nicholas Ritchie of the Hampton Golf Club.

In the pursuit of Dr. Douglas Brewer Shield, as low net winners, are 2017 NB Men’s Four Ball Low Net Winners, Matt Garnett (Hampton) and Brodie Bourque of the St. George Golf Course.  Garnett and Bourque’s net 9 under par (-9), 63, gives them a slim one shot lead over 2018 Net Champions Kris Leask and Duane Mitton of the host Sussex Golf & Curling Club heading into Sunday’s final round.  Holding down third position in the net category are 2018 net runner’s up Darren and Nicholas Richie of Hampton.  Their net seven under par (-7), 65, has them one shot back of Leask and Mitton and two back of Garnett and Bourque.

Sunday’s Final Round of the NB Men’s Four Ball, presented by TaylorMade will begin at 8:10am, off of the 1st tee, with the leaders teeing off in the final paring at 9:20am.

In the Senior Men’s division, it is the Moncton Golf & Country Club team of Brent Wilson and Patrick Woodford are taking a one-shot lead into day two after carding a two under par (-2), 70, on day one.  Wilson and Woodford would make their hay on the front nine with birdies at #3, #5 and #8 before giving a shot back with a bogey on the par four 9th.  A single birdie at the 14th would be cancelled out by bogey at the last getting the two safely into Sunday’s final pairing.

Locked in a tie for second, just one shot back, after shooting opening rounds of one under par (-1), 71’s, are the Hampton team of Gary Swain and Robert McIntyre and the Fredericton duo of Pat Garagan and Sonny Phillips.  After posting a one over par (+1), 37, on the front nine, Swain and McIntyre would bounce back on their inward nine holes carding four birdies (#11, #14, #15 & #16) to just two bogeys (#13 & #18) to get to within one of the lead.  While Garagan and Phillips would make their move on the front with a birdie at the 1st and another at the 6th before giving a shot back at the 8th making the turn at one under par (-1) before posting a pair of birdies and bogeys for an even par back nine.

Tied for fourth position are the teams of Louis Boudreau (Pine Needles Golf & Country Club) and Jean LeBlanc (Fox Creek Golf Club) and Herrick Hansen and Brian Shannon of the Aroostook Valley Country Club, who each carded even par 72’s in their opening round.

Sunday’s Final Round of the NB Senior Men’s Four Ball, presented by TaylorMade will begin at 8:00am off of the 10th tee, with the leaders teeing off in the final paring at 9:30am.