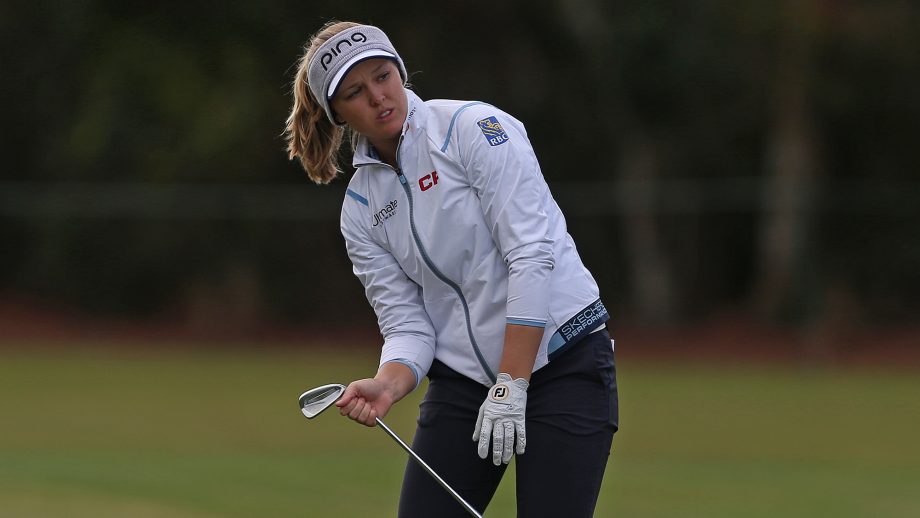 LAKE BUENA VISTA, FLORIDA - JANUARY 20: Brooke Henderson of Canada hits her second shot on the fourth hole during the final round of the Diamond Resorts Tournament of Champions at Tranquilo Golf Course at Four Seasons Golf and Sports Club Orlando on January 20, 2019 in Lake Buena Vista, Florida. (Photo by Matt Sullivan/Getty Images)

LAKE BUENA VISTA, Fla. – Eun-Hee Ji of South Korea left the mistakes to everyone else down the stretch in the LPGA Tour season opener.

Ji managed a strong wind and temperatures in the 50s on Sunday by making three birdies on the back nine to pull away and close with a 1-under 70, giving her a two-shot victory in the Diamond Resorts Tournament of Champions.

Ji got her mistakes out of the way early, opening with two bogeys to fall behind Lydia Ko. The 32-year-old South Korean took the lead for good with a birdie on the 10th hole at Tranquilo Golf Club at Four Seasons, and she stayed in front the rest of the way.

Ko was one shot behind when she pulled her tee shot on the par-5 13th and never found it, and then compounded the error with a three-putt for a double bogey. Ko made double bogey on the closing hole for a 42 on the back nine and a 77.

“I just enjoyed my game with my celebrity partners,” Ji said. “It makes it more fun and I relaxed more. So I didn’t get nervous.”

Brooke Henderson of Smiths Falls, Ont., started the day a shot behind the leaders but struggled on Sunday, shooting a 4-over 75 on the round. That put her into a tie with Stacy Lewis for sixth at 8 under for the tournament.

“I gave myself a lot of great opportunities and just the putter, you know, wasn’t working, which sort of sucks. But overall I feel like I hit it really well and I battled, which is nice.”

@BrookeHenderson locks up her first top 10 of the 2019 @lpga_tour season with a T6 finish at #DiamondLPGA ????

The LPGA opener was limited to winners over the last two seasons. It also included a celebrity field of athletes and entertainers who competed for a $500,000 purse using the modified Stableford scoring system.

Former Atlanta Braves pitcher John Smoltz had 33 points in the final round for a three-point victory over former pitcher Mark Mulder. Smoltz was busy doing math with the Stableford system, trying to hold on for the victory.

“I played really defensively knowing I could get two points for par,” Smoltz said. “I never thought the bogey I made at 17 would be the difference.”

Lewis, in her first competition as a mother, shot 70 and tied for sixth.

Ariya Jutanugarn, the No. 1 player in women’s golf who captured every major award last year, went into the weekend two shots out of the lead and closed with a pair of 75s to tie for 18th. Her sister, Moriya Jutanugarn, managed a bogey-free round for a 69 to tie for fourth with Shanshan Feng (70).

Ko says her problems on the 13th started with thinking she had to hammer her tee shot.

No one could find it in the marsh area left of the fairway, though Ko was at least consoled to see “like a million balls in there, so it makes me feel better that I wasn’t the only one that hit there.”

She hit another tee shot and easily carried the bunker, and then hit a stock 3-wood onto the green.

“I was like, ‘Well, that was stupid.’ Because I could have just hit a normal driver, and I probably wouldn’t have duck-hooked it and it would still be able to be in play,” Ko said. “I guess there’s moments I thought it was necessary, but then it wasn’t. But, hey, you’re always going to have some of these failures along the way.”

The LPGA is now off for two weeks before resuming in Australia for the Vic Open. The tour returns to the United States on March 21-24 for the Founders Cup in Arizona.