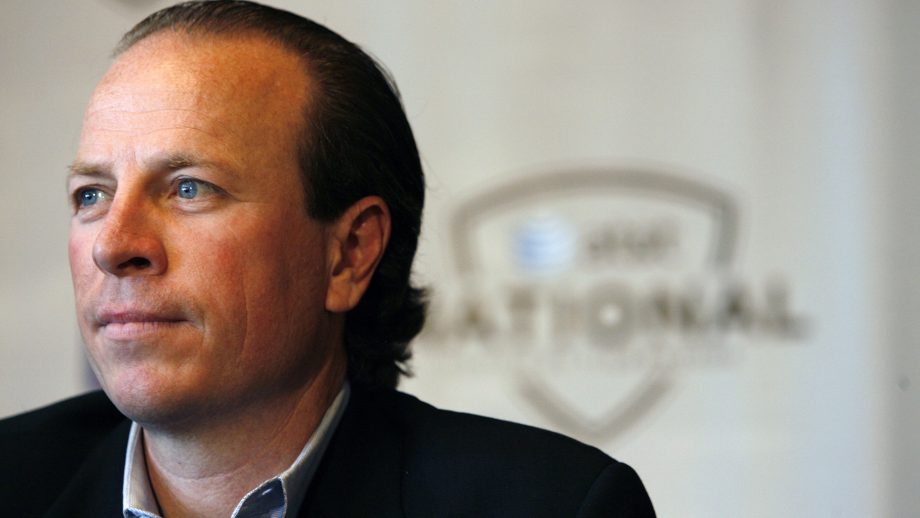 USA - 2008: Greg McLaughlin, President of the Tiger Woods Foundation, at a press conference in 2008 held in the USA. (Photo by Simon Bruty/Any Chance Productions/Getty Images)

ST. AUGUSTINE, Florida, and PONTE VEDRA BEACH, Fla. – The World Golf Foundation Board of Directors announced today that Greg McLaughlin will assume the combined roles and responsibilities of World Golf Foundation Chief Executive Officer & President of The First Tee. McLaughlin most recently served as President of PGA TOUR Champions, since January 2015; prior to his role at the TOUR, he was CEO of the Tiger Woods Foundation for 14 years.

McLaughlin will strategically direct the World Golf Foundation, The First Tee and World Golf Hall of Fame, expanding the reach, impact and global prominence of each and ensuring financial performance and sustainability. McLaughlin will serve as a leader among the world’s top golf organizations, and a key ambassador and spokesperson for the game of golf.

“We are thrilled to welcome Greg to this incredibly important new role,” said Jay Monahan, World Golf Foundation Chairman and PGA TOUR Commissioner. “I’m not sure we could have asked for a more qualified, passionate leader, considering his deep level of experience and executive leadership success within the golf world and beyond. Given the scope of this newly consolidated role – to further the World Golf Foundation’s mission and build upon the vision of The First Tee – his proven ability to build relationships at the highest level of the sports, business and not-for-profit communities is unique and will be invaluable. This restructure represents an exciting evolution for the World Golf Foundation, and Greg is the perfect person to take the mantle.”

World Golf Foundation Board Member and LPGA Commissioner Mike Whan added, “Greg will be a perfect fit in this new role. He is an authentic, proven leader who delivers on so many important attributes – he’s experienced, passionate and a visionary. Specifically, I think Greg will instantly connect with The First Tee chapters, donors and participants. With Greg at the helm, and given his ability to build lasting partnerships, this will be an exciting time for The First Tee and the World Golf Foundation.”

“As a member of the greater golf community for more than 30 years, I have always been proud of what the collective efforts of our sport have done and continue to do to inspire communities and change lives, especially for young people who can learn and grow through the values of golf,” said McLaughlin. “This is an exciting time in the evolution of the World Golf Foundation and, specifically, The First Tee, and I am humbled by and excited for the opportunity to lead our industry’s efforts to increase participation and global awareness of golf as a sport that is welcoming to all.”

McLaughlin joined the PGA TOUR in 2014, initially as Senior Vice President of the TOUR’s Championship Management division; he was promoted to PGA TOUR Champions President in 2015 and Executive Vice President of the PGA TOUR in 2018. McLaughlin has been instrumental in the success of PGA TOUR Champions, overseeing a record-setting 20-year marketing partnership with Charles Schwab & Co., the implementation of the Charles Schwab Cup Playoffs and the addition of several new title sponsors and markets.

Prior to joining the Tiger Woods Foundation in 2000, McLaughlin was the Vice President of Tournaments at the (now-named) Genesis Open, Honda Classic and BMW Championship.

McLaughlin graduated from The Ohio State University with a degree in Economics. He also received his Juris Doctor from Chicago-Kent College of Law.

Ten-year World Golf Foundation CEO Steve Mona will assist McLaughlin with the transition, as Executive Director of WE ARE GOLF and Senior Advisor, before retiring later next year. In addition, 25-year golf industry veteran, Jack Peter, who has made significant contributions including overseeing the design, build out and operation of PGA TOUR Entertainment and most recently, helping to bring the World Golf Hall of Fame to global prominence in his role as President, will retire from his position at the end of the year.

“I’d like to thank Jack for his incredible leadership through the years, specifically his success in raising the profile of the of the World Golf Hall of Fame Museum,” added Monahan.

Brodie Waters, World Golf Hall of Fame Vice President of Business Affairs, will lead the Hall of Fame structure, funding and operations with McLaughlin’s oversight, and will also oversee PR/communications activities for the World Golf Foundation.

Miller Brady, a 19-year veteran of the PGA TOUR, will succeed McLaughlin to lead PGA TOUR Champions. Brady steps into the role after most recently working under McLaughlin as Senior Vice President & Chief of Operations, where his responsibilities have included direct oversight of tournament business affairs, operations, competitions and player relations as well as scheduling. In previous roles at the TOUR, Brady gained valuable experience within the Corporate Marketing department and as Special Assistant to the Commissioner (Tim Finchem) during the development of the FedExCup. Brady began working in the sports industry in 1996 with Advantage International (now Octagon), overseeing BMW’s grassroots golf program and eventually Bank of America’s PGA TOUR Sponsorship of the West Coast Swing. He is from Atlanta and is a graduate of Georgia Southern University.