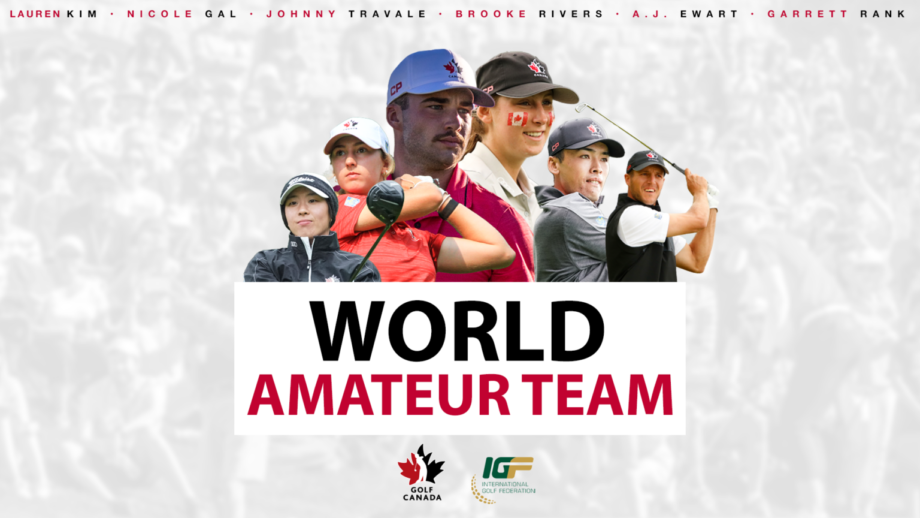 (August 18, 2022) – Golf Canada is pleased to announce today the six athletes that will represent Team Canada at the 2022 World Amateur Team Championships, conducted by the International Golf Federation in France,  outside the capital city of Paris.

Representing Canada on the women’s side will be Lauren Kim, 17, of Surrey B.C., Nicole Gal, 17, of Oakville, Ont, and Brooke Rivers, 17, of Brampton, Ont. The trio will compete for the Espirito Santo Trophy in the 29th playing of the women’s competition, August 24-27 at Le Golf National (Albatros Course) and Golf de Saint-Nom-de-la-Bretèche (Red Course).

Donning the red and white for the men’s team will be Johnny Travale, 21, of Stoney Creek, Ont., Garrett Rank, 34, of Elmira, Ont., and A.J. Ewart, 23, of Coquitlam, B.C. – the three highest ranked Canadian men on the World Amateur Golf Rankings. The Canadian squad will vie for the Eisenhower Trophy during the 32nd edition of the men’s tournament, also being contested at Le Golf National (Albatros Course) and Golf de Saint-Nom-de-la-Bretèche (Red Course), August 31 – September 3.

“The World Amateur Team Championships provide our players with an opportunity to compete against the best amateurs from nations around the world,” said Kevin Blue, Chief Sport Officer at Golf Canada. “This year’s team includes deserving candidates that continue to demonstrate excellence on the international stage, and we are confident they will represent Canada and themselves very well.”

Women’s Team Bios:
Nicole Gal, a member of Team Canada’s National Junior Squad for two years running, will lead Team Canada into the World Amateur Team Championships as the highest ranked player on the World Amateur Golf Rankings. In June, Gal posted a 5th place finish at the Women’s Porter Cup. Two weeks later, she led the charge for Team Canada at the 2022 Toyota Junior Golf World Cup, guiding the junior girls to a bronze medal finish in Japan while finishing T4 in the individual competition. Most recently, the Ole Miss freshman reached the quarterfinals at the U.S. Junior Girls Championship, played in Bowling Green, KY. The 2021 Canadian Junior Girls champion will look to use her winning nature to power the Canucks to a podium finish in France.

Lauren Kim of Surrey, B.C., also a member of Team Canada’s National Junior Squad, earned a spot on the team with strong performances in 2022. The 17-year-old, who has committed to the University of Texas, is no stranger to the big stage; in June, she competed against the world’s best at the U.S. Women’s Open, posting rounds of 73-75. Her talents were on full display again at the 2022 Canadian Women’s Amateur Championship where she demonstrated resilience and poise en route to a 3rd place finish. Kim is currently competing at the 2022 Niagara Canada Summer Games – where she leads – before crossing the pond to represent her country on the global stage.

Brooke Rivers, a two-year member of Team Canada, burst on to the Canadian golf scene in 2019 when she won the NextGen Quebec Championship, and followed that up with another victory at the Coca Cola Junior Championship. That was only the beginning for the Brampton, Ont. native. The following year, Rivers was crowned champion of the prestigious North and South Junior Championship at Pinehurst, which gained her automatic entry into the renown North and South Amateur Championship earlier this season. The 17-year-old also finished second at the Porter Cup and recorded a 5th place showing at the ORORO PGA Women’s Championship of Canada.

Men’s Team Bios
Johnny Travale’s excellence in the classroom reflects his play on the golf course. A Dean’s List nomination in the Fall 2022 semester was a signature highlight for the Stoney Creek, Ont. native in his senior year at the University of Central Florida. An impressive 2021-22 season that featured three top-5 finishes, four top-10 results and five top-20 showings earned him a unanimous nod as an All-AAC performer for the second straight year. His strong play earned an invitation to the 2022 RBC Canadian Open, his first start in a PGA TOUR event. Travale’s 106th ranking on the World Amateur Golf Rankings is the highest among Canadian men, followed closely by World Amateur teammates Rank and Ewart.

Garrett Rank is no stranger to competing for Canada at the World Amateur Team Championships, having done so in 2018 and 2016. Now, he brings that wealth of experience into this year’s edition of the championship and mentor his young teammates in their bid for the Eisenhower Trophy. The Elmira, Ont., native has previously won three Canadian Men’s Mid-Amateur Championships – a feat he accomplished in consecutive years – and will seek a fourth Canadian Men’s Mid-Amateur title prior to departing for Paris. The NHL referee’s 2021 golf season was highlighted by a runner-up finish at the Porter Cup and a 9th place finish at the U.S. Men’s Mid-Amateur Championship. Rank also boasts the experience of representing Canada in the 2015 Pan-American Games, where he finished 15th.

A.J. Ewart made a lasting impression in his junior year at Barry University, winning seven events to tie his countryman Adam Svensson’s school record for the most victories in a single season. The Coquitlam, B.C. native’s superb play in the collegiate ranks earned him the NCAA DII Jack Nicklaus Player of the Year Award, as well as a PING All-American first team nomination. Ewart received an exemption into the 2022 RBC Canadian Open and will look to continue his strong play in Paris.