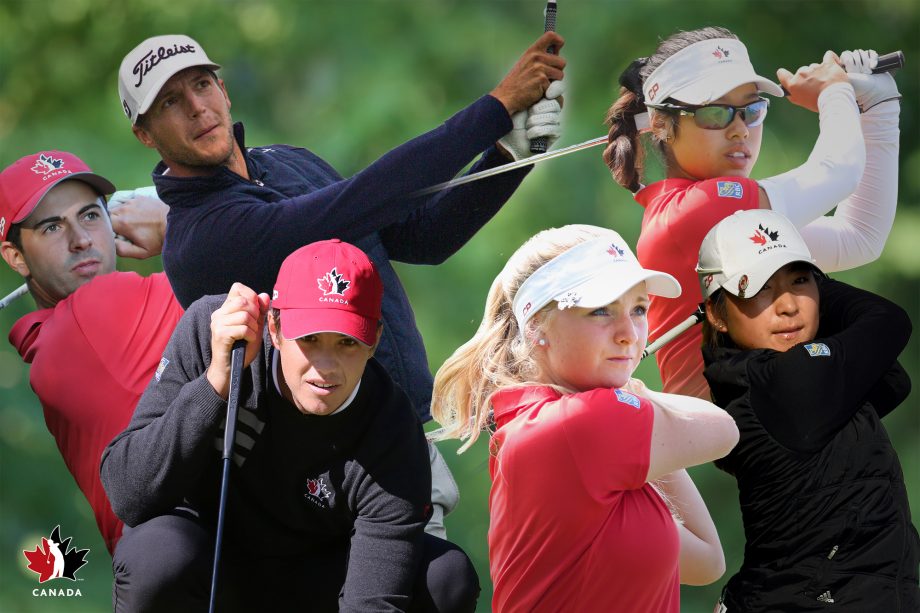 Duncan, BC – 09 August 2018 – Joey Savoie, Montréal, QC, tees off during the final round of the 114th Canadian Men's Amateur Championship at Duncan Meadows Golf Course in Duncan, BC. (Chuck Russell/Golf Canada)

Golf Canada is pleased to announce the six individuals selected to represent Canada at the 2018 World Amateur Team Championship, conducted by the International Golf Federation.

The World Amateur Team Championship—featuring both a women’s (Aug. 29 – Sept. 1) and men’s (Sept. 5-8) competition— will be contested at Carton House (Montgomerie and O’Meara Courses) in Maynooth, Ireland, located 30 minutes west of Dublin.

Representing Canada on the women’s side will be Maddie Szeryk, 22, of London, Ont., Jaclyn Lee, 21, of Calgary, Alta., and Naomi Ko, 20, of Victoria, B.C. The trio will compete for the Espirito Santo Trophy at the Montgomerie and O’Meara courses at Carton House.

The men’s team selected to represent Canada consists of Hugo Bernard, 23, of Mont-St-Hilaire, Que., Joey Savoie, 24, of La Prairie, Que., and Garrett Rank, 30, of Elmira, Ont. Also contested on both at the Montgomerie and O’Meara courses at Carton House, the men will compete for the Eisenhower Trophy.

“The World Amateur Team Championships are an excellent benchmark to monitor our players’ performance and development globally,” said Jeff Thompson, Golf Canada’s chief sport officer. “Our participation in this premier golf competition is a reflection of our commitment to supporting and developing world-class talent in Canada, and we hope to demonstrate that again this year with the remarkable group of athletes chosen to represent our country.”

A member of Team Canada’s National Squad for the past four years, Szeryk will lead the women’s squad into competition as the top-ranked Canadian at No. 16 on the World Amateur Golf Rankings (WAGR). Szeryk will make her second World Amateur appearance after being selected in 2016. She finished a strong 2018 collegiate campaign at Texas A&M with two NCAA wins en route to earning All-SEC First Team honours for the fourth consecutive season. Szeryk’s senior year featured 11 top-ten finishes in fourteen events including four runner-up finishes. She would add another runner-up finish at the prestigious Women’s Porter Cup in June and finished T22 at the Canadian Women’s Amateur. Currently the No. 1 ranked golfer on the National Women’s Order of Merit, the 22-year-old has prior experience representing Canada on the global stage, finishing tied for 15th at the 2014 Youth Olympics and helping Canada to win the team competition at the 2017 Mexican Amateur. She has also competed in three CP Women’s Opens as an amateur.

Jaclyn Lee is in her fifth year as a member of Canada’s National Team and is currently ranked No. 21 on the WAGR. The Ohio State Buckeye enters her final collegiate season with three NCAA wins including the 2018 Big Ten Championship as well as a pair of runner-up finishes. Lee made a splash on the international amateur scene in 2018, making it to the semi-finals at the Ladies’ British Open Amateur Championship and quarterfinals of the US Women’s Amateur. The former Alberta Ladies Amateur champion also boasts LPGA experience, making the cut at the 2016 CP Women’s Open and competing in the 2018 Meijer LPGA Classic for Simply Give, where she finished tied for 35th.

Naomi Ko is in her sixth year with the Team Canada program and will make her second World Amateur appearance. The 20-year-old spent three years with the Development Squad before graduating to the Amateur Squad in 2016. Ko, a three-time CP Women’s Open competitor who will be heading to her final year at N.C. State, won her first NCAA championship in 2017 at the Lady Puerto Rico Classic. Her 2017 season also included third-place finishes at the Canadian Women’s Amateur Championship, the B.C. Women’s Amateur Championship and Women’s Porter Cup.

A four-year member of Team Canada, Hugo Bernard is the top-ranked Canadian on the WAGR at No. 78 and will compete in his second World Amateur. The 2016 Canadian Men’s Amateur champion recorded three top-10 finishes this season, including a runner-up at the Azalea Invitational and a ninth place finish at the Australian Men’s Amateur. In 2018 he also finished T41 at the Canadian Men’s Amateur and played in his third RBC Canadian Open. His 2017 season was highlighted by earning medalist honours at the U.S. Amateur Qualifying in Maine alongside top-five finishes at the 2017 Canadian Men’s Amateur and the French Open – Coupe Murat. In 2016, Bernard posted six top-5 finishes in eight events with the Division II Saint-Leo Lions, including medalist honours at the NCAA Division II Championship to earn him a Freshman of the Year title to go with being named as a first-team all-American.

Team Canada Amateur Squad rookie Joey Savoie is ranked No. 84 on the World Amateur Golf Rankings (WAGR) and currently leads the National Men’s Order of Merit thanks to seven top-five finishes this season. Internationally, Savoie has a win at the Grant Clements Memorial Tournament in New Zealand, co-medalist honours at a U.S. Amateur Qualifier and a fifth-place finish at the prestigious St. Andrews Links Trophy in Scotland. The Middle Tennessee State graduate also led Team Canada to victory at the 2017 Tailhade Cup in Argentina with his first-place finish and competed in his first RBC Canadian Open.

Team Canada graduate Garrett Rank made the most of his amateur season to secure a spot on his second career World Amateur team. Rank, a three-time RBC Canadian Open competitor, has been balancing a professional career as an NHL referee with a busy summer competing at high-level amateur golf events. The 30-year-old made headlines when he earned co-medalist honours to qualify for the U.S. Open. His 2018 season has been highlighted by a win at the Ontario Men’s Amateur Championship and a third place finish at the Canadian Men’s Amateur Championship where he earned low-Canadian honours. The three-time Canadian Men’s Mid-Amateur champion also boasts international experience from representing Canada in the 2015 Pan-American games, where he finished 15th, as well as the 2016 World Amateur Team Championship, where he finished tied for 36th.

About the World Amateur Team Championships

The World Amateur Team titles are contested over four days of stroke play. A country may field a team of two or three players. In each round, the total of the two lowest scores constitutes the team score for the round. The four-day total is the team’s score for the championship.