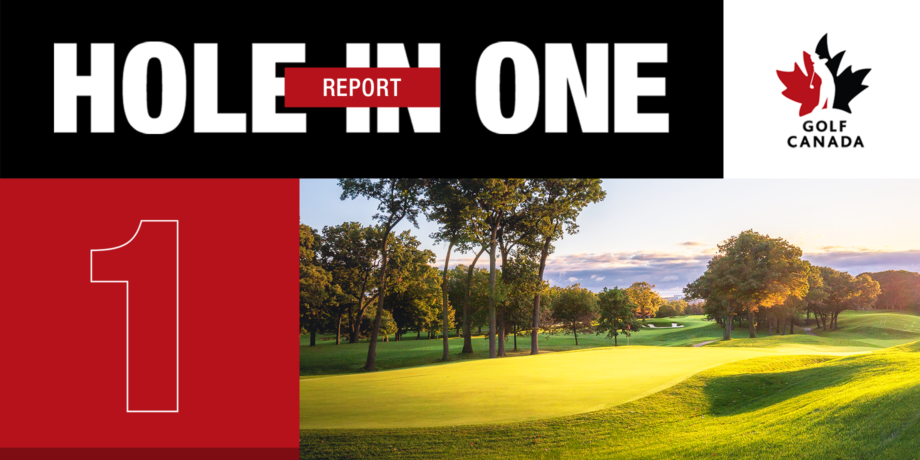 Each week we write to Golf Canada members who record holes-in-one, congratulating them and asking if they’d tell us how it happened. These are their stories (edited for length and clarity).

Thanks for the congratulations!

Editor’s Note: Give this video a bit of your time; it will be the most joyful thing you watch today.

Appreciate the congratulatory email – what a nice touch by Golf Canada! I’d be happy to provide the details of my hole-in-one and a photo as well, see below. Feel free to share on the Golf Canada website and social channels as you see fit.

Having just hit my tee ball OB on 12 at the Paintbrush, I was last to tee off on the par-3 13th. The 13th was playing 212 yards to a back pin. Jeremy N. led off with a well struck 5 or 6 iron that took a soft bounce and just failed to crest the ridge in the middle of the green. Michael O., a new member at The Pulpit Club followed and hit a great hybrid on the same line as Jeremy, but with a lower ball flight he appeared to crest the ridge. Since I lost my ball on the previous hole, I reached in to my pocket and pulled out a mint Callaway Chrome Soft that I found during my recent search. I teed that ball up, looked at the Maple Leafs, and made a decent pass with my 3 wood.

When we got to the green, we saw 2 balls on the green, with Michael’s being less than 10ft away. After looking for a minute or two, we were thinking my ball was lost, until Michael looked in the hole.

It was a long winter, but it is so good being back out on the course….what a game!

How nice is it of you to write to congratulate me on my hole in one. The pro at my course didn’t think much of it, he simply said, “Easy game.” So thank you for taking the time to write.

The people who played with me were: Cathy B., Brenda W. and Chantale B. The distance was 108 yards and I used my 8 iron. I have attached pictures of that moment and give you permission to feature my story on GolfCanada.ca.

Imagine my surprise receiving this congratulatory acknowledgment from Golf Canada !!

Celebrated with pops on LM patio :)))

Thanks for the note!

Was a beautiful but windy day. 10th hole, we lasered it at 173, but felt it was playing 195 or so with the wind and elevation. I took out my 5 iron, had a nice smooth swing, the ball bounced once before the green one more on the fringe, rolled about 6 feet and it dropped. To be honest, I didn’t really believe it until we got up to the green.

Here are a couple pictures by all means share if you want. Thanks again and have a wonderful weekend!

For details, I was playing with Mark M. and Ethan O. The yardage was about 185 and I used a 7 iron. This is my second hole-in-one in ten months, and third in my lifetime, with the last one being on number 13 at the Edmonton Country Club in July 2021. Feeling very lucky to say the least!

Thank you for the email and the graphic.

I was on hole 13 at Hollinger par 3; playing from the whites. It was 103.4 yards to the pin, as indicated by my rangefinder. Thats right in the range of my approach wedge (50 degrees).

The ball I struck, had the best feeling swing I had all day. Great high ball flight that landed right in front of the flag and it slowly crept down to the hole. Once it fell, I couldn’t believe it and in that moment the realization came at a burst and I screamed at the top of my lungs. It alerted the group ahead of me that was teeing off haha. They thought I had a heart attack. After I told them that I just hit a hole-in-one, they came to the flag to check and sure enough there it was: My TaylorMade RBZ ball that I found in the woods that day.

Thank you for contacting me, I was able to relive it again by describing what happened!

Yes, it was the moment of my golf life! It was on hole number 12 at Maple City Country Club, and I believe the yardage was 105 yards. I used a 6 hybrid for that shot. I played with Judy P., Judy W. and Claudette R.

Thank you so much for acknowledging the feat.

I was playing with my cousin Marco C., my usual playing partner, it was the 4th hole par 3. We were playing from the black tees; my watch indicated it was 152 yards to the middle, so I used my 7-iron and the ball was moving left to right, playing the wind accordingly. I saw it bounce on the green, but because of the time of day (5’ish) and glare from the sun off the green, I couldn’t see where it landed.

We drove up to the hole, and I didn’t see my ball on the green, I was looking for it, right of the flagstick, and in the greenside bunker, but didn’t see it. Marco checked the pin and it was in the hole.

I don’t have a Facebook, Twitter or Instagram account (old and wise for that kind of stuff), so taking a picture didn’t cross my mind. We just carried on with the round. The funny thing we didn’t know how to mark it on the score card… is it just a 1 and a rectangle or …. we didn’t know it was two circles…. we know how to mark birdies and bogies and what not …..but for a hole in 1, we had no clue.

Thank you for very much, really do appreciate Golf Canada reaching out.

Have you recently accomplished the feat of a hole-in-one? Tell us about it! Share your story, picture / video and course information with us at holeinone@golfcanada.ca.