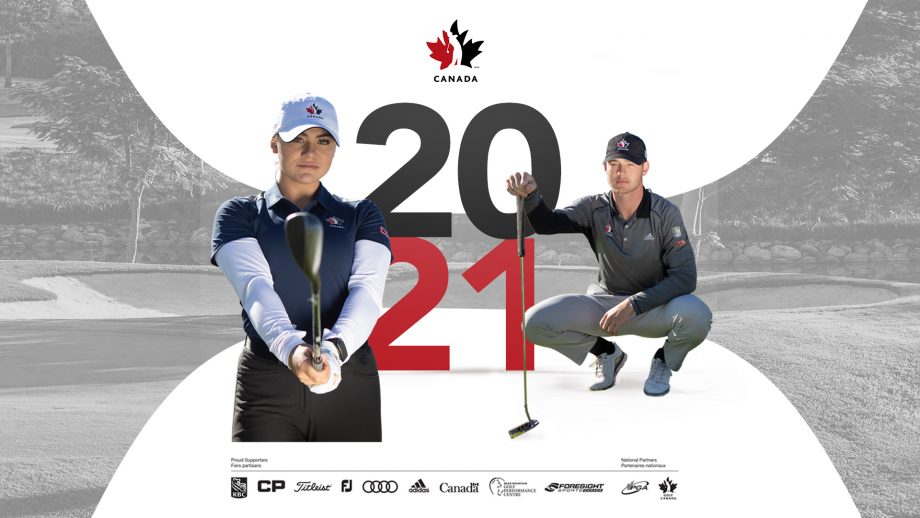 <![CDATA[<strong>OAKVILLE, Ont. – Golf Canada is pleased to announce the names of the 29 athletes, male and female, who have been selected to represent Team Canada as part of the 2021 National Amateur and Junior Squads. Fifteen athletes will compete on Team Canada’s National Amateur Squad, consisting of eight players on the men’s squad and seven on the women’s squad. The announcement marks a significant increase in roster size, adding six athletes to the previous year’s team. The roster expansion is due in large part to a restructuring of team resources in addition to increased funding support from the Golf Canada Foundation’s network of Trustee partners.

“We are very pleased to extend the reach of the Team Canada program to support more of the country’s top athletes,” said Derek Ingram, Head Coach of the National Men’s Squads. “The new program structure allows our coaching staff to focus more resources on training and sport science with each athlete’s individual results used to determine their respective competitive schedule.”

Team Canada’s 2021 Squad members have all competed and achieved impressive results at regional, national, and international competitions, including medals at the Pan-Am Games, NCAA tournament wins and victories at prestigious amateur competitions. Due to the COVID-19 pandemic, all athletes from the 2020 Squad were able to return in 2021, provided they met team eligibility criteria. “We are very excited with the athletes selected – they represent a mix of returning team members as well as talented up-and-coming athletes,” said Tristan Mullally, Head Coach of the National Women’s Squads. “It is a new chapter for amateur golf in Canada and we have a tremendous group of ambassadors representing our country.” The following athletes have been selected to Team Canada’s 2021 Amateur Squad:

The National Junior Squad—a U19 program—features fourteen athletes (seven girls and seven boys). In September, Golf Canada hosted a selection camp at Bear Mountain Resort in Victoria, B.C., to evaluate Canada’s top juniors. In partnership with the Provincial Golf Associations, all golfers were run through a series of testing modules followed by a 54-hole competition. From March through early June, the Junior Squad will practice out of Golf Canada’s National Training Centre at Bear Mountain—the fourth year that the program has provided centralized training, accommodation and education for athletes during the second semester of their school year. Team members will be immersed in a focused centre of excellence, surrounded by world-class technical coaching staff and experts in the areas of mental performance, physiotherapy, biomechanics, and nutrition. The following athletes have been selected to Team Canada’s 2021 Junior Squad:

Golf Canada is pleased to announce the 2021 Team Canada coaching staff that will support both the National Amateur and Junior Squads. For the amateur squads, Derek Ingram of Winnipeg returns as men’s head coach with support from assistant coach Andrew Parr of London, Ont. On the women’s side, Tristan Mullally of Dundas, Ont., returns as head coach. On the junior side, Robert Ratcliffe of Comox, B.C., will lead the centralized Junior Squads at the National Training Centre in Bear Mountain for the fourth year. He will receive support from newly named coach Jennifer Greggain, also of Comox, B.C. Players will have access to Team Canada’s sport science staff, which includes physiotherapist Greg Redman and Psychologist Dr. Adrienne Leslie-Toogood supporting the men’s team with physiotherapist Andrea Kosa and mental performance consultant Christie Gialloreto supporting the women. The Junior Squads will continue to receive sport science support from the Canadian Sport Institute Pacific in the areas of strength & conditioning, physiotherapy, mental performance, and nutrition. “Team Canada has shown tremendous success and the coaching staff is well-positioned to lead the increased roster of athletes along with the centralized training program at Bear Mountain,” said Laurence Applebaum, Golf Canada Chief Executive Officer. “Along with every area of the business, we will continue to monitor the impact of COVID-19 to ensure the health and well-being of the athletes and coaches. We now look ahead to helping shape the bright futures of Canada’s top up-and-coming athletes looking to follow in the footsteps of graduates such as Brooke Henderson, Corey Conners and Mackenzie Hughes.” Mullally, Ingram, Ratcliffe, Greggain and Parr are all PGA of Canada members. Golf Canada will announce the selection of the 2021 Team Canada Young Pro Squad in January.]]>