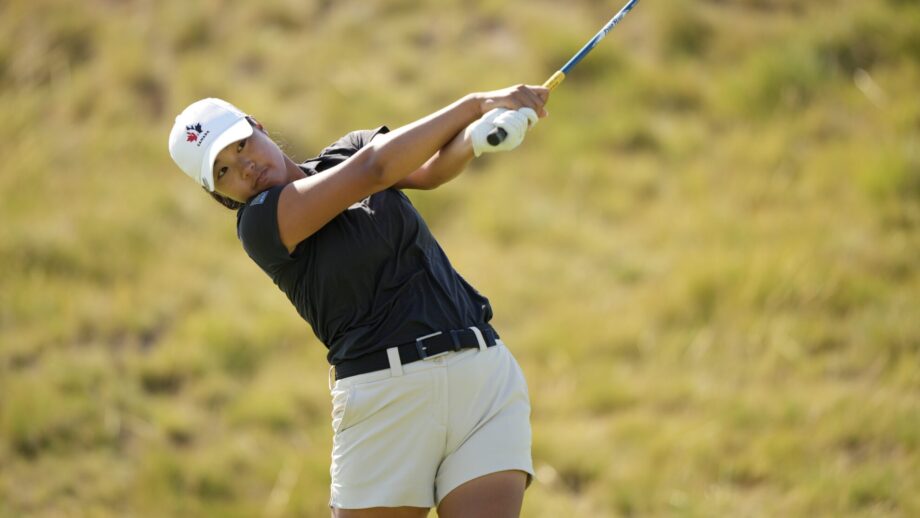 Monet Chun hits her tee shot on the seventh hole during the quarterfinals at the 2022 U.S. Women's Amateur at Chambers Bay in University Place, Wash. on Friday, Aug. 12, 2022. (Darren Carroll/USGA)
Golf New Brunswick

After arriving in the U.S. in May, 17-year-old Saki Baba of Japan has shown an affinity for American golf. She made the cut in the U.S. Women’s Open (T-49), was the stroke-play medalist and reached the Round of 32 at the U.S. Girls’ Junior and now is into the final four of the U.S. Women’s Amateur at Chambers Bay.

During Friday’s quarterfinal, Baba shone brighter than the August sunshine at Chambers Bay by defeating 21-year-old Lauren Lehigh of Loveland, Colo., 4 and 3. After the players tied the first five holes, Baba made four straight birdies – including a chip-in on No. 7 – to pull away from Lehigh. Her lead reached 5 up after a highlight-reel approach on the 281-yard par-4 12th, where she spun a wedge from 118 yards into the hole for an eagle.

“Lauren’s drive went to a really good position,” said Baba through a translator. “I just had to make that birdie. That’s where I aimed it, and I didn’t expect it to go in. I’m really happy about it.”

Baba’s opponent in Saturday’s semifinal round will be fellow 17-year-old Bailey Shoemaker of Dade City, Fla., who defeated Leigh Chien of Irvine, Calif., 5 and 3. Like Baba, Shoemaker tied for 49th at the U.S. Women’s Open, and just three weeks ago made a run to the quarterfinals of the U.S. Girls’ Junior. In April, she was runner-up with partner Kaitlyn Schroeder in the U.S. Women’s Amateur Four-Ball Championship in Puerto Rico.

While she didn’t have her best stuff on Friday, making only one birdie compared with the 8-under golf she played in defeating future USC teammate Amari Avery in the Round of 16, the high school senior used crisp ball-striking and timely putting to defeat Chien.

“Pars are your friend, especially on a day like this with tough conditions,” said Shoemaker. “The wind was up and the greens were faster, too, for sure. It was good to be able to just get by, and I know I’m still confident.”

In the first quarterfinal match, Annabel Wilson of Ireland was seeking to continue her winning formula: birdie the par-5 first hole and build an insurmountable lead, this time against Catherine Rao of Camarillo, Calif. Wilson did win the first hole, with a par, but Rao got it back at the third hole and the two were tied for most of the match until Wilson was able to win Nos. 15-17 to clinch the 3-and-1 victory.

“It’s the first time I’ve ever played this course in the wind, and it really picked up on the back nine,” said Wilson, a 21-year-old UCLA senior. “It becomes a completely different strategy. I had to adapt, and I did that well out there.”

The match between Brianna Navarrosa of San Diego, Calif., and Monet Chun of Canada was tight throughout and included some memorable late fireworks. The players were tied when they reached the par-3 17th hole, where Chun struck the shot of the championship by holing a delicate bunker shot for birdie to take a 1-up lead heading to 18. Navarrosa poured in a gutsy birdie putt to win that hole and extend the match. The players moved on to play the par-4 10th (19th hole of the match), and Navarrosa found trouble off the tee while Chun striped a drive and hit an approach to the middle of the green to seal the victory.

“That was a pretty exciting last couple holes there, and it was definitely intense,” said Chun, who won the Canadian Women’s Amateur earlier this summer. Chun will play Wilson in the first semifinal match on Saturday.