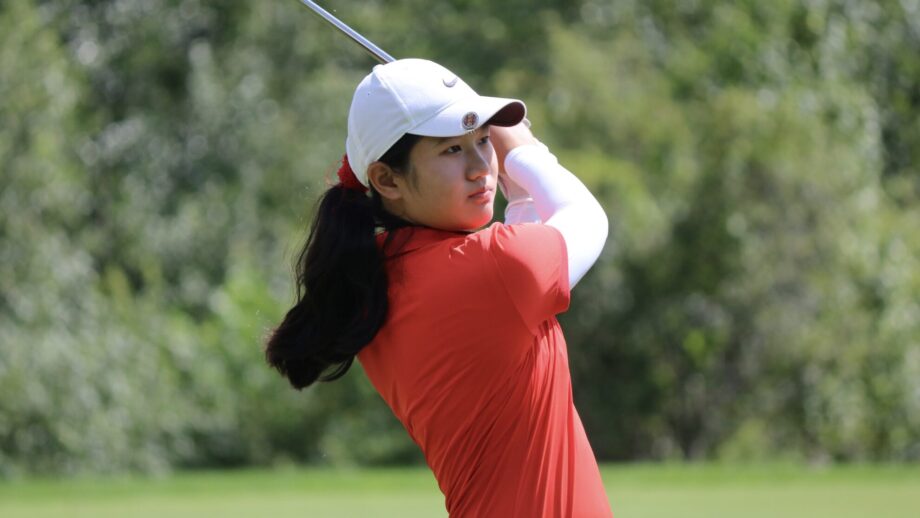 12 YEAR OLD LUCY LIN WAS AMONG THE TOP PERFORMERS IN ROUND ONE OF THE 2022 CANADIAN JUNIOR GIRLS CHAMPIONSHIP AT THE MARSHES GOLF CLUB IN OTTAWA, ONT., ON JULY 26.
Golf New Brunswick

OTTAWA, Ont. – The leaderboard flip flopped all throughout the first round of the 2022 Canadian Junior Girls Championship, presented by BDO, but when the dust settled, there were five tied atop the leaderboard.

27 other players are within five shots of the leaders at The Marshes Golf Club in Ottawa, Ont.

Boyd, a native of Oshawa, Ont., recorded three birdies on the day and suffered only one bogey. The 18-year-old birdied the par-5 2nd hole, before falling back to even par two holes later. From there, it was nothing but birdies and pars for the junior who earned the clubhouse lead early in the day.

Quinton, 17, also made a trio of birdies on the day. After a bogey-free front nine, the Burlington, Ont. native dropped a shot on the par-5 2nd hole but bounced back with a pair of birdies down the stretch to secure a piece of the pie.

Lee and Hyun Lee, both of Langley. B.C. matched each other with five birdies aside and had merely similar scorecards. Both started their tournaments with a pair of birdies in their opening holes, and added two more early in their back nines, before capping off their rounds with a final birdie on No. 18.

Lin, one of the youngest competitors in the field, had the most birdies on the day with six. After falling to one-over par after 10 holes, the 12-year-old rallied off three birdies coming in – including a pair on her final two holes – to grab a share of the lead after the opening round.

Recent history doesn’t bode well for the quintet. In four of the last five Canadian Junior Girls Championships, only once did the leader or co-leader after the first round go on to win the tournament, but ask them and they’ll tell you trends are meant to be broken.

Xu, 16, carried on her momentum from the Canadian Women’s Amateur Championship last week, with another strong showing in round one. The Richmond Hill, Ont. native, who finished in second place at Westmount Golf & Country Club, rolled in five birdies, to go along with four bogeys on the way to a one-under par 71.

Hyun Lee and Lin are tied for the lead in Juvenile division – a subdivision for girls 16 and under.

In the interprovincial team competition, the Team British Columbia contingent of Hyun Lee and Tina Jiang carded an even-par 144 for a three-stroke advantage over Team Ontario. The team championship will wrap up tomorrow at the conclusion of the second round.