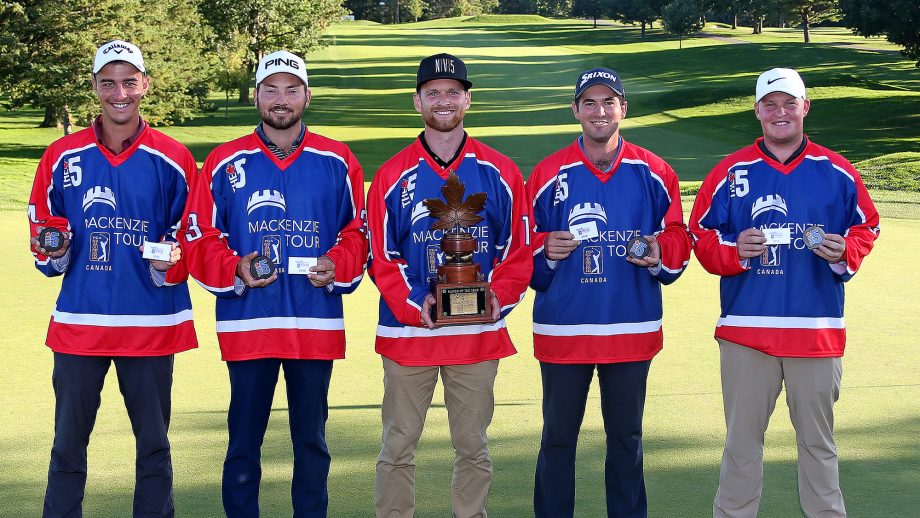 The native of Ponte Vedra Beach, Florida finished with $139,300 for the season and topped the money list – leading the five players who earned status on the Web.com Tour for 2019.

McCumber, 27, won the Osprey Valley Open and then won the very next week at the Syncrude Oil Country Championship presented by AECON. In the process, he became the only golfer in Mackenzie Tour history to win back-to-back events.

A three-time winner on PGA TOUR Latinoamerica, McCumber finished third at the ATB Financial Classic after his two-straight wins, but won The Players Cup the very next week.

McCumber, who was battling a shoulder injury for most of last year, was “totally healthy” as of November. He said he a routine of working out and practicing whenever he wanted, which was beneficial for him going into this season.

“Having full status on this Tour I had a good game plan coming in,” said McCumber. “The formula is really good and what I’m doing is right for me. I’m not surprised I came out with a good year. There’s a lot that goes into being No. 1 – getting momentum, capitalizing on opportunities, and I did a good job of that.”

McCumber had the money title locked up before the final event of the season. After his victory in Edmonton he moved to the top of the Order of Merit, a spot he never relinquished.

George Cunningham, after a tie for second at the Freedom 55 Financial Championship – his sixth top-10 of the year – ended up at No. 2, $37,133 behind McCumber. With $102,167 earned on the year, he became the first golfer in Mackenzie Tour history to earn more than $100,000 and not finish on top of the money list.

“I’ve learned a ton this year,” said Cunningham, who finished in the top 30 at the RBC Canadian Open in his first PGA TOUR start this summer. “I’m such a different player I feel like from when I was in college, and I thought I was playing really well in college. Every single thing I’ve learned this year is off the charts.”

Zach Wright, who finished 39th at the Freedom 55 Financial Championship, moved down to third on the Order of Merit after Cunningham jumped him to get to No. 2.

“I did well. I’ve been very consistent. I’ve had a few rounds where my attitude got int the way, but I can always learn from that. Overall I did pretty well,” said Wright, who became the only player in Mackenzie Tour history to open a season with six consecutive top-10 finishes. “At the beginning of the year I moved back home and started working with my old coach, and everything I was feeling good about. It was nice to get off to a good start because it gave me confidence, and I knew I could do it.”

“Getting into The Five does feel far fetched at the beginning of the year,” admitted Pereira. “You know you have to win out here and then you know you need a top-5 or top-3 to secure your status. It’s extremely challenging. To come out and get it done feels awesome and gives me a lot of confidence.”

Gellerman, who, like Wright, never won this year on Tour but still finished in The Five said he made some good progress from 2017, which was his main goal at the start of this year.

“I tried to reach some of my goals mid-year and see where that led me. I played some good golf along the way. Unfortunately Tyler (McCumber) got in the way a few times,” said Gellerman with a laugh, who finished second to McCumber at both the Osprey Valley Open and The Players Cup. “I’m really happy to be here.”

The Five will graduate to the Web.com Tour in 2018 and look to follow in the footsteps of 19 players who have gone on from the Mackenzie Tour to the PGA TOUR during the PGA TOUR-era (2013-present), including PGA TOUR winners Tony Finau, Nick Taylor, and Mackenzie Hughes.

“It’s been a great season on the Mackenzie Tour with so many incredible performances, especially for the players who make up The Five this year,” said Mackenzie Tour President Jeff Monday. “A special congratulations goes to Tyler, who played some truly impressive golf this year. We wish all five players success on their journey to the PGA TOUR.”

In addition to The Five earning status on the Web.com Tour, players finishing 6-10 on the Order of Merit earned an exemption into Final Stage of Web.com Tour Q-School, led by No. 6 Sam Fidone, of Lufkin, Texas, who earned $66,742.

After his victory Sunday at the Freedom 55 Financial Championship, Danny Walker of Bradenton, Florida, moved up 44 spots on the Order of Merit to the No. 7 spot.

Ben Griffin, of Chapel Hill, North Carolina, Mark Anguiano of Bellflower, California, and Ian Holt of Stow, Ohio – who shot a 6-under-par 64 Sunday at the Freedom 55 Financial Championship to move into a tie for fourth and move five spots up the Order of Merit – round out the rest of the top 10.

Players finishing No. 11-25 earned an exemption into Second Stage of Web.com Tour Q-School. The biggest mover of that group Sunday was Jonathan Garrick of Chicago, Illinois, who, after finishing tied for second at the Freedom 55 Financial Championship, moved up 20 spots to No. 19.