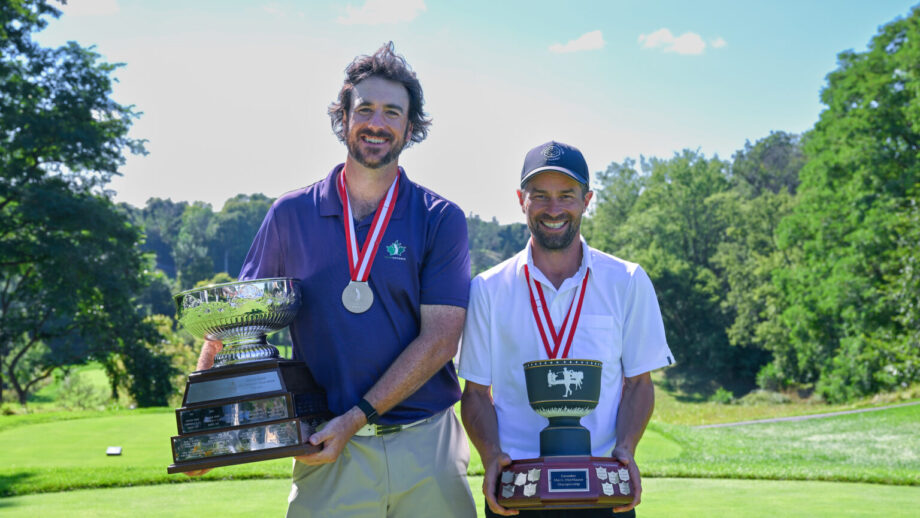 THORNHILL, Ont – Charles Fitzsimmons could not have scripted a better homecoming if he tried.

The North York, Ont. product carded an even-par 70 to win the 2022 Canadian Men’s Mid-Amateur Championship at his home course, The Thornhill Club in Thornhill, Ont.

With the win, the 35-year-old defends his title from 2021 at Fort McMurray Golf Club in Fort McMurray, Alta., and once again etches his name in the President’s Cup.

“[This one] feels even better,” said Fitzsimmons. “To do it here, to defend… it’s hard to put into words right now, it’s still kind of sinking in but it’s pretty special. This place has meant so much to me, to my family and to be able to win here is just awesome.”

Fitzsimmons grabbed a share of the lead in Tuesday’s opening round and didn’t falter. A steady diet of birdies and pars outweighed the few bogeys he made en route to the national championship. Rounds of 68, 67, 70 and 70 – all even par or better – totalled for a score of 5-under-par 275 and a five-stroke triumph.

On Friday, the lead slipped down to no less than three strokes, but even at that, Fitzsimmons says he was feeling the nerves.

“There were moments where I felt really calm and in control and good, and then moments where I felt nervous and a little more uncertain about how things were going to go,” said Fitzsimmons. “It was definitely a bit of a mental grind at times but, again, I just always felt the warmth and the support from the Club and there’s so many great members here, it was able to bring me back.”

With the win, Fitzsimmons ears an exemption into the 2023 Canadian Men’s Amateur Championship.

“Well, I feel old, but also it feels great because like I said earlier, it takes a thousand swings to get here, and it’s on the bucket list so it’s quite emotional,” said Markusson.

Admittedly, it wasn’t the 41-year-old’s best round of golf, but he held on to win by one stroke over Rob Couture (Dallas, Texas) and Mike Dinner (Burlington, Ont.). Markusson says he knew exactly where he stood in crunch time.

“We’re leaderboard watchers whenever you’re in the thick [of things],” said the Gimli, Man. native. “We figured we have to grind in, and we saw some mistakes and knew that we’d just have to bring it in, but the stressful three pars coming in isn’t easy.”

Markusson got up-and-down for par out of the greenside bunker on No. 17 and rolled in a two-foot par putt on No. 18 to clinch the title.

Warren Sellors, of Hudson, Que., finished as this year’s runner-up at even-par on the tournament. Sellors’ 4-under-par 66 in Wednesday’s second round matched the low score of the week and propelled him up the leaderboard. He closed the competition with a 1-under 69 to vault into second place.

Brett Nymeyer (+2), Ryan Tsang (+3) and Barrett Jarosch (+4) round out the top five. The top-10 finishers and ties will earn a direct exemption into the 2023 Canadian Men’s Mid-Amateur Championship at a location to be determined.

Earlier in the week, On Wednesday, Team Ontario claimed the R. Bruce Forbes Trophy as champions of the Interprovincial Team competition. The victory marked the sixth consecutive provincial title for Ontario and 16th in the 29-year history of the team event.