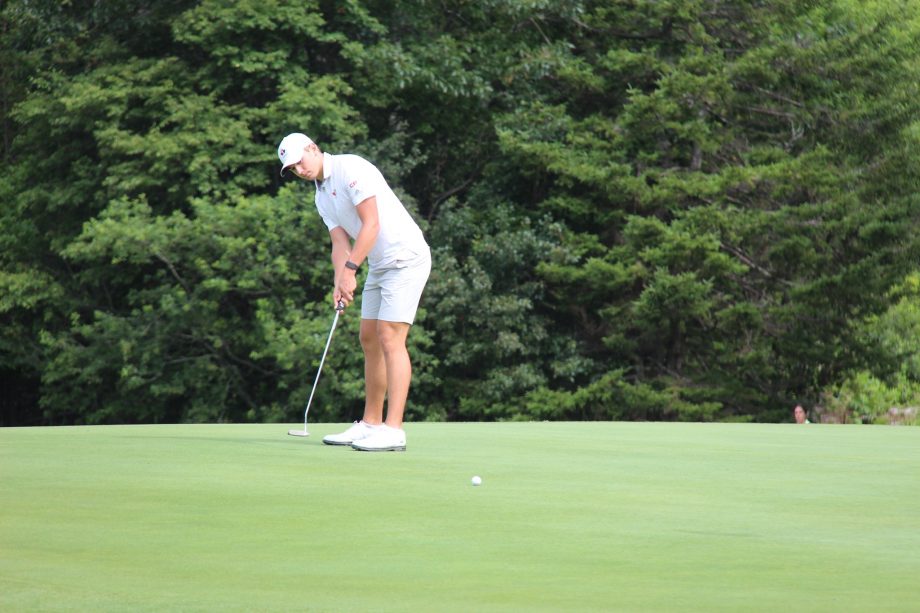 Owen Mullen putting on #18 during round one.
Golf New Brunswick

HAMPTON, NB– A foggy morning greeted players at the 2021 NB Under-19 Championships, however as time moved on and players began to warm up, so did the weather.

Fast fairways and firm greens would be the story behind Round 1 as players were challenged by the difficult scoring conditions created at the Hampton Golf Club.

The Under-19 Boys led the field off at 7:00 AM highlighted by Golf Canada National Junior Team Member, Owen Mullen of the Truro Golf Club and Covered Bridge & JH Sports’ Daniel Kirby.

Mullen would go on to record the low round of the day with a 1-under, 71 performance. A front nine 37, even-par paired with a 1-under, 34 back would see the Team Canada and Truro Golf Club member sit on top of the leaderboard after round 1. St. Ignace’s Pierre Luc Arsenault finds himself in solo second after a steady 1-over, 73. Hampton’s very own, Nicholas Ritchie finished at 2-over, 74 followed shortly after by Miraimichi’s Devon Gionet, Gowan Brae’s Nicholas Colton, and Fox Creek’s Oliver Aucoin who all recorded opening rounds of 4-over, 76.

Gowan Brae’s Nicholas Colton holds the round 1 lead in the Under-17 Championship after his 4-over, 76. Three shots behind Colton are Fredericton’s Aaron Partington and Mikael LePage of Restigouche, the duo carded matching 7-over, 79’s during Saturday’s difficult scoring conditions. Brady Wood of the Fredericton Golf Club pushes his way into fourth place after an 8-over, 80.

Truro’s Elliot Mullen joins his brother Owen at the top of their respective leaderboards after round one. A 7-over, 79 gives mullen the overall lead in the boys Under-15 Championship, followed closely by Westfield’s Morgan Costain and Petitcodiac Valley’s Chase Burgress whose opening rounds of 83, 11-over see the pair share second place. Tyler Graham of Westfield joins the hunt at the top of the leaderboard in fourth place after his 13-over, 85.

In the Under-13 Championship, Ken-Wo’s Kooper McKay leads the field after his first round, 8-over, 80. Carter Lavigne of the Moncton Golf & Country Club follows behind with a 9-over, 81, and five shots ahead of Abercrombie’s Grady Cohen who carded a 14-over, 86. The three will have it all on the line for tomorrow’s final round as only one player can leave with the 2021 NB Under-13 Boys Championship title.

The Riverside Country Club’s Addison McClune leads the Under-19 Girls Championship after her opening round of 10-over, 80. A small margin separates McClune and clubmate Callie Taylor who finished with an 11-over, 81 and sits one shot ahead of Sussex’s Rachel Steeves after carding a 12-over, 84.

The Under-17 Girls leaderboard mirrors the Under-19 as all three players keep their positions across both championships.

Abercrombie’s Avery Cohen leads the charge in the Under-15 Girls Championship after her 10-over, 82, and holds a two-shot lead ahead of her competition. Riverside’s Callie Taylor holds second place, with Sussex’s Rachel Steeves rounding out the top-3.

The Riverside Country Club’s Daphne Taylor leads the Under-13 Girls, heading into Sunday’s final round.

The Dormie Workshop Par-3 Challenge rewards the player who performs the best on all par-3’s during the course of the championship. This weekend, the Under-15 Girls & Boys and Under-19 Girls and Boys will all attempt to showcase their smooth iron play in the race for the Par-3 Challenge crowns.