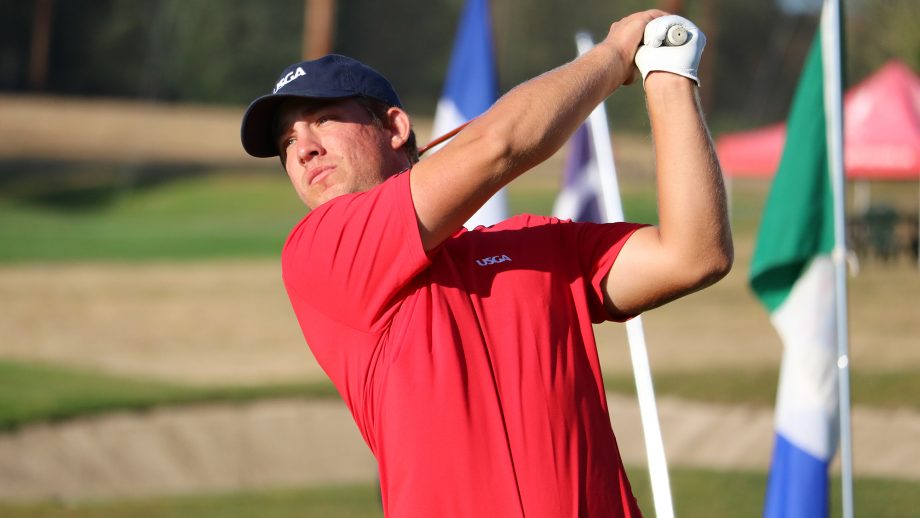 Reigning champion Zach Bauchou fired a 65 in Monday’s opening round of the 114th Canadian Men’s Amateur Championship at Duncan Meadows Golf Course to tie the course record and lead by two strokes.

The Forest, Va., native thrived in the sweltering B.C. weather, going 7 under through his first 10 holes thanks to two eagles—one that included a hole-out from the bunker on No. 17. Bauchou cooled off on his final eight holes, giving one back with a bogey on the par-3 7th.

“I was making some nice putts and hitting my irons really well,” said Bauchou, greenside at the 9th hole. “My round kind of fizzled off at the end—I missed a short putt and stopped making some putts. But 65 is still a solid round and it’s a good start.”

Bauchou will tee off at 1:03 p.m. PT on Tuesday at co-host Pheasant Glen Golf Resort. He plans to clean up some minor mistakes, with the game plan remaining the same.

“I really felt like the last eight holes I could have played a lot better, so I need to touch up on some things this afternoon and come out strong tomorrow,” said the 22-year-old Oklahoma State junior. “I’m going to hit a lot of drivers out there [Pheasant Glen], you just need to hit some good wedges and make some putts.”

Defending champion Zach Bauchou of Forest, Va., shoots an opening-round 65 to tie the Duncan Meadows course record and take the early clubhouse lead in the Canadian Amateur at 6 under #CDNAm

Canadian Junior Boys champion Christopher Vandette of Beaconsfield, Que., sits in a four-way tie for 7th at 3 under par.

Team Quebec jumped out to an early lead in the 36-hole inter-provincial competition for the Willingdon Cup. The trio’s lowest two scores (67-67) of the round from Savoie and Sale gave the team a score of 8 under par and a six-stroke advantage.

Teams Alberta and British Columbia share second place at 2 under par. The Willingdon Cup champion will be crowned on Tuesday at Pheasant Glen.

In addition to claiming the title of 2018 Canadian Men’s Amateur champion, the winner will earn exemptions into the 2018 U.S. Amateur at Pebble Beach Golf Links in Pebble Beach, Calif., and the 2019 RBC Canadian Open at Hamilton Golf & Country Club in Hamilton, Ont. from June 3-9.

The champion will also be eligible to receive an exemption into the U.S. Junior Amateur, the U.S. Mid-Amateur or the U.S. Senior Amateur, if applicable.