Day One at the 2019 NB Pee Wee & Junior Championships 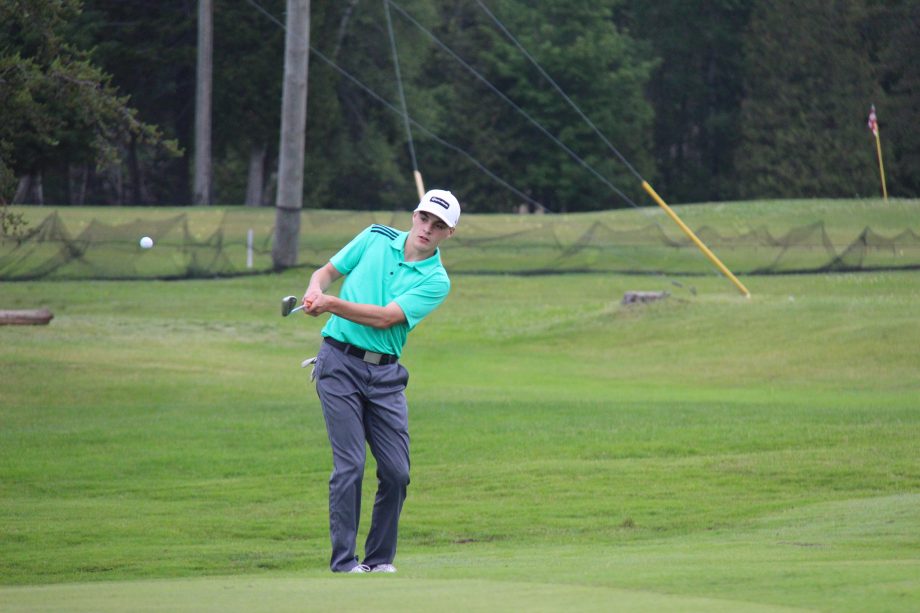 A cloudy day greeted the 62 golfers competing at the NB Pee Wee and Junior Championship for Day 1 at the Hampton Golf Club. By the end of this coming Thursday 8 provincial titles will be given out to a female and male golfer in the following divisions: Pee Wee (ages 12 and under), Bantam (ages 13-14), Juvenile (ages 15-16) and Junior (ages 17-18). The Pee Wee play 36 holes and the rest of the field will play 54 holes to determine the champions. Split tees will be used on all three days resulting in tee times running from 8:00 am – 9:40 am daily, off of holes #1 and #10.The leader after day one, in both the Junior and Juvenile division was Pierre Luc Arsenault who plays out of Le Club de Golf de St-Ignace. With birdies on holes 3, 6 and 8 and back to back bogeys on 4 and 5, he made the turn at 1-under par, 36, on the front. His back nine included a bogey on the tough par three #10 and another on #16 but his birdie on #15 allowed for a 1-over par, 36. Added together the frontrunner on the day had a smooth even par 72.

Just one shot off the lead in both the Junior and Juvenile Boys Division, Owen Canavan from the Ashburn Golf Club in Halifax, NS who shot an even par 37 on the front nine. After bogeying the first hole he bounced back with a birdie on the second hole, a birdie on the par six, 6th hole and a bogey on #9 along with his 5 pars which all added up to a 37. Making the turn to the back nine he started off with a couple of bogeys on holes #10 and #11 but was 1-under par the rest of the way in with his birdie on #15. Canavan, like Arsenault finished the back with a 36 to finish with a 1-over par 73.

Felix Boucher of Fox Creek Golf Club and Isaac Dixon out of the Riverside Country Club are four shots back after firing matching 77’s. Boucher had a rough time on the only par 6 in the Maritimes #6 but other than that had a steady day. Then there are four players another shot back at 78 including last year’s defending champion, Nathan Hogan, JH Sport’s Daniel Kirby, Riverside’s Will Chisholm and Hampton’s own Nick Ritchie.

Last week’s East Coast Bantam Boys Division Champion, Gavin Ives of Ashburn Golf Club in NS leads the way here at Hampton Golf Club in that same division with a round 1 score of 84. Nicholas Colton is hoping to change that tomorrow as he is in second place, four shots back.
Last year’s Pee Wee Boy’s Champion, Chase Burgess from the Petitcodiac Valley Golf & Country Club finds himself 3 shots back of Morgan Costain of the Westfield Golf & Country Club ended today with an 88. It will be a close battle for the Boy’s Pee Wee title tomorrow.

The girl’s division started off on the back nine and last week’s East Coast Junior Girls Champion, Haley Baker who represents the New Ashburn Golf Club in NS continued her leading ways. On the tough back nine, she started with three pars until a bogey on hole #13 put her 1-over par, but a bounce back birdie on hole #14 and a par on #15 had her back to even par. Three straight bogeys on #16, #17 and #18 led to her 3-over par 38 on the back. After 4 bogeys on the back she finished with a total of 79 and is looking forward to an even better day tomorrow. Julie Gauvin out of Fox Creek Golf Club and Alexandra Guitard who plays out of Royal Oaks Golf Course are tied for second place just two shots back after shooting matching 81’s.

Abby Baker from Ashburn Golf Club in Halifax, who is the defending champion in the Bantam Girl’s Division, does not want to give up her title! Not only is she leading the Bantam division by a sizable margin, she is also leading the Girl’s Juvenile Division. Baker has a slim one-shot lead over Mackenzie Deveau of Fox Creek Golf Club. In the Pee Wee division and in her first Golf NB Championship round, Rachel Steeves who plays out of the Sussex Golf & Curling Club is leading the way with a 101.

Day two will crown the Pee Wee Girl’s and Boy’s Champions and the other divisions will continue play through to Thursday. There is still plenty of great golf to be played at the Hampton Golf Club and rumour has it that the sun might make an appearance the next couple of days! These young golfers are amazing players and we look forward to seeing how they perform!