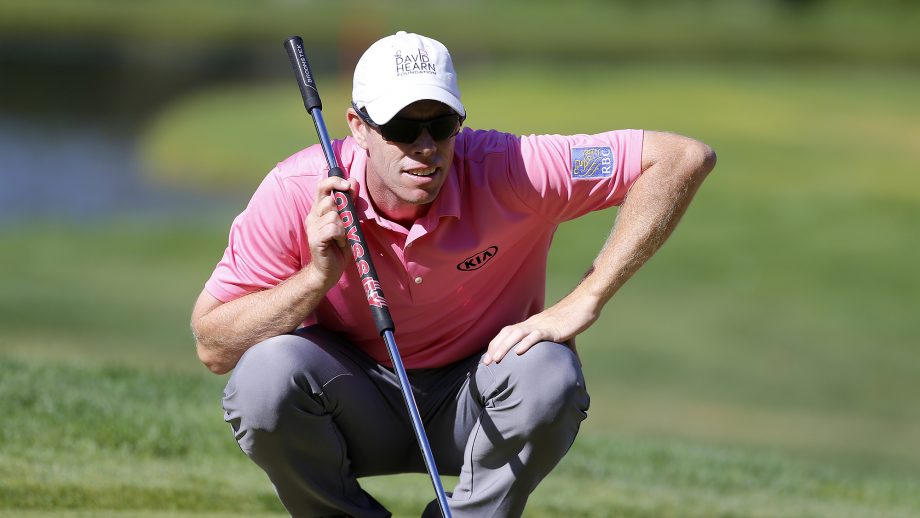 BOISE, IDAHO - AUGUST 23: David Hearn of Canada lines up a putt on the 2nd hole during the second round of the Korn Ferry Tour Albertson's Boise Open at Hillcrest Country Club onon August 23, 2019 in Boise, Idaho. (Photo by Jonathan Ferrey/Getty Images)

NEWBURGH, Indiana — David Hearn of Brantford, Ont., rallied in the final round at the Korn Ferry Tour’s season-ending championship with a 6-under 66 to secure status for the 2019-2020 PGA TOUR season. He finished the championship in a tie for fourth at 13 under par, helping boost his ranking over the three-event final series to No. 13.

Fellow Canadian Adam Svensson of Surrey, B.C., fell just short, finishing outside the top 25. The 23-year-old relinquishes his current PGA TOUR status and will compete on the Korn Ferry Tour in 2019-2020.

Tom Lewis carded a final-round 65 to win by five strokes. Lewis joined 24 other players in earning 2019-20 membership through the Korn Ferry Tour Finals.

University of Texas alum Scottie Scheffler earned the top spot on both The Finals 25 and the combined points list after a T7 finish on Monday, in addition to his win and T11 finish over his previous two starts. The 23-year-old earns fully exempt status on the PGA TOUR during the 2019-20 season as well as an exemption into the 2020 PLAYERS Championship. Scheffler becomes the first player to top both lists since Chesson Hadley in 2017.

Never give up. Never stop trying to get better. @PGATOUR 2020 here we come!

“It’s great to be able to play in THE PLAYERS next year,” said Scheffler, who finished with 10 top-10s and two wins in 20 starts this year. “I have some family close by in Jacksonville so it will be nice to have them come out to the event. It’s awesome to be able to compete against one of the best fields in golf, and becoming fully exempt, to be able to set my schedule, that’s huge.”

Lewis lapped the field after two separate strings of three birdies in a row during the final round. After collecting birdies at the third and fifth, countered by a bogey at the sixth, Lewis tacked on six more from Nos. 8-10 and 15-17. His 29 birdies this week was five more than anyone else in the field.

“It’s always been a dream of mine to play on the PGA TOUR,” said Lewis, who finished T11 in the 2019 Open Championship. “Obviously I’ve achieved some good things on the European Tour and hopefully I can achieve better things on the PGA TOUR. I’m looking forward to the year I’ve got ahead, just to see what the future brings.”

While Lewis wrapped up a dominant performance, several other players provided dramatic finishes coming down to the final putt. Local legend Chris Baker, who grew up in Brownstown, Indiana, saved par on the 72nd hole to earn his first PGA TOUR card after more than a decade as a professional. The par save came after a double bogey at the penultimate hole to put his status in doubt. Doug Ghim, the low amateur at the 2018 Masters Tournament, got up and down out of a greenside bunker to claim his first PGA TOUR card.

D.J. Trahan and Richy Werenski tied for the 24th spot, securing the final available cards with 186 points in the Korn Ferry Tour Finals. Justin Harding finished 26th in The Finals 25, just 0.125 points behind Trahan and Werenski.

Four of the 25 players who secured their PGA TOUR cards solely through the Korn Ferry Tour Finals will be rookies during the 2019-20 season. The top 25 are: