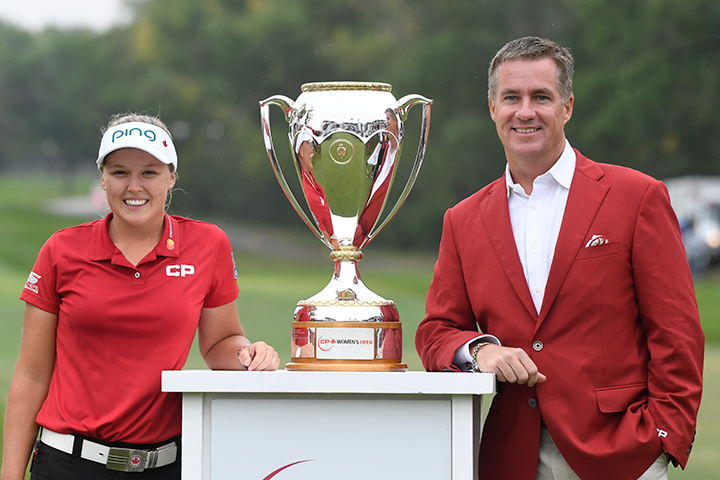 Canada’s top-ranked golfer and Canada’s iconic railway are partnering for five more years, both on and off the course. Canadian Pacific (CP) has renewed seven-time LPGA tour-winner and the No. 12 ranked female golfer in the world, Brooke Henderson to serve as its golf ambassador.

Since signing on with CP in 2017 as a golf ambassador, Henderson has won four more LPGA Tour titles, including her historic win on home soil at the 2018 CP Women’s Open where she became the first Canadian to win the National Open Championship in 45 years.

Joining the CP family is sister and caddy Brittany Henderson, who will also wear the CP logo as she supports Brooke as a team and family member.

“It is an honor to extend Brooke’s sponsorship until Dec. 31, 2023, and welcome Brittany to the CP family,” said Keith Creel, CP President and Chief Executive Officer. “Brooke remains the perfect ambassador for CP as we continue to grow the game of golf, advocate for healthy living through CP Has Heart, and build on the iconic Canadian brand that is CP. Adding Brittany to the CP family was a natural decision, as railroaders know that precision and excellence requires a strong team.”

CP continues to sponsor Team Canada, a relationship that marked the beginning of Brooke’s relationship with the railway. Both the Hendersons are graduates of the amateur program that supports young golfers as they pursue their professional dreams.

“I am so proud to continue my relationship as an ambassador for CP. As many of my own family members have worked for CP in my hometown of Smiths Falls, it is truly special for me to wear the logo and continue that long history as a member of the CP family. Furthermore, the sincere gesture to add my sister Brittany to the CP family is incredible, as she’s been with me every step of my career. We both look forward to celebrating many more victories with the CP family.”

Already in the CP family is four-time LPGA Tour winner Lorie Kane, who signed on as an ambassador in 2014 when CP took over title sponsorship of the National Open. Kane, who was inducted into the Canadian Golf Hall of Fame in 2017 and named a recipient of the Order of Canada in 2006, has an established reputation as one of the most personable and consistent players in the game, and has dedicated many efforts off the course to champion support for CP Has Heart.

CP recently named SickKids Foundation as its official charity beneficiary of the 2019 CP Women’s Open that will be hosted at Magna Golf Club in Aurora, Ontario. Through its CP Has Heart program, CP will once again make a substantial donation to support local paediatric care. Follow along this season as golf ambassadors Brooke and Lorie encourage fundraising efforts to help reach this year’s $1.75M donation target.

In the five years of CP’s title sponsorship of the CP Women’s Open, $8.5 million has been raised to support children’s heart health in Canada. This will mark the third time in six years southern Ontario has hosted the CP Women’s Open resulting in more than $3.3 million dollars invested in London (2014 – $1.3 million) and Ottawa (2016 – $2 million).