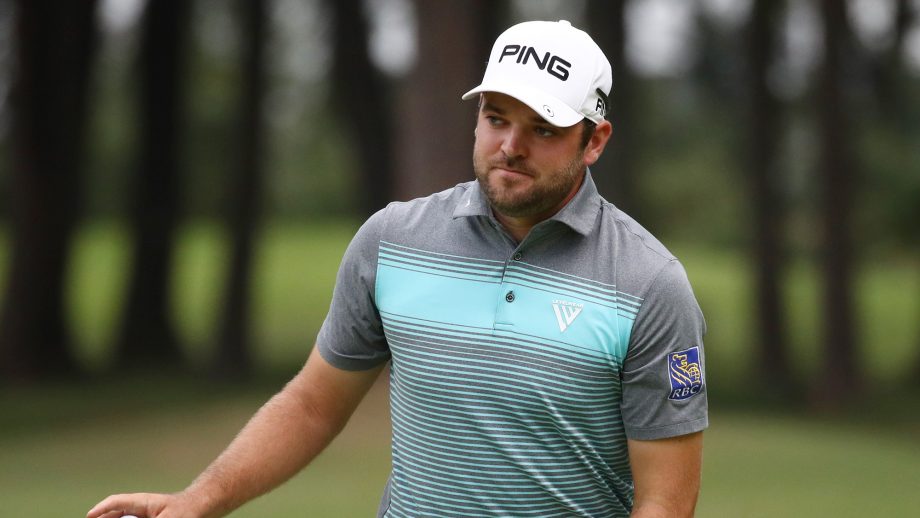 INZAI, JAPAN - OCTOBER 27: Corey Conners of Canada acknowledges the fans after the birdie on the 16th green during the third round of the Zozo Championship at Accordia Golf Narashino Country Club on October 27, 2019 in Inzai, Chiba, Japan. (Photo by Chung Sung-Jun/Getty Images)

<![CDATA[Like most people, Corey Conners is finding new and different ways to fill his time while observing physical distancing during the COVID-19 pandemic. That means playing as the Toronto Maple Leafs in NHL 20 on his brand new XBox, reading books, cooking with his wife Mallory, exercising and cleaning. Conners even put on the cowboy boots he won at last year's Valero Texas Open and walked around the house for some ``positive energy.'' ``It's been great to spend time with my wife at home, we don't really get to spend extended periods of time at home so we've enjoyed it,'' said Conners on a conference call on Wednesday, with his cowboy boots beside him. ``I don't really have a plan at this point for getting back out into competitive mode and practising. ``I think I'll wait another other week or two, since it's been great for my body and mind to start a refresh and reset.'' <blockquote class="twitter-tweet">

— Golf Canada (@GolfCanada) April 1, 2020 Conners, from Listowel, Ont., and his wife considered returning home to Canada after the PGA Tour cancelled the rest of The Players Championship on March 12 but ultimately decided to stay at their home in Palm Beach Gardens, Fla. That day the PGA Tour also cancelled the Valspar Championship, the Dell Match Play, and the Texas Open in San Antonio where Conners had hoped to defend his crown. As disappointing as that was for Conners, the postponement of some other dates he had circled on his calendar have hit harder. He had qualified to play the Masters for the third time in his career but the major has been postponed to an unknown date, likely in October. He was also likely going to represent Canada at the Tokyo Olympics, but the Games have been pushed back to 2021.

“That was a big goal of mine the past couple of years, trying to give myself a chance to be on that team,” Conners said of playing at the Olympics. “I played well enough that I was in a good position to make the team but, you know, things happen out of my control, so it’s still motivating me.”

The RBC Canadian Open, currently scheduled to be played June 11 at Toronto’s St. George’s Golf and Country Club, is also in danger of being cancelled. Toronto Mayor John Tory announced on Tuesday that the city was cancelling its permits for all public gatherings up until June 30. Although the edict didn’t apply to sporting events held on private property – like the Canadian Open – it did bring an end to the planned concert series held on the Friday and Saturday night of the tournament when the Chainsmokers and Keith Urban were to play on the property of a nearby school. Golf Canada issued a release after Tory’s announcement saying it respected the city’s decision and would have an announcement on the fate of the Canadian Open within the week. “I’m really looking forward to getting there, if we can play, but we’ll have to see,” said Conners. “I’d be really disappointed if it gets delayed but obviously it’s not an easy decision and there’s very valid reasons for things getting cancelled or postponed.

“I’ve been looking forward to it all year really, and it’s so much fun to play in front of the Canadian fans. The support’s incredible at their RBC Canadian Open, so if it gets played, I’ll be very happy to get in the mix but if not, we’ll wait until next year.”

[video_embed id="88544"][/video_embed] In the mean time, Conners is content to putter around the house and keep reading books like “Pound The Stone” by Josh Medcalf and playing Forza Racing and “chell” (NHL 20) but he admits not yet ready to play online against other gamers. “But I’m going to get pretty antsy shortly, I think, and want to get back out there,” Conners said. “I’ll love to see what the PGA Tour decides, when we’re able to start playing tournaments again, then kind of make a plan from there.”]]>