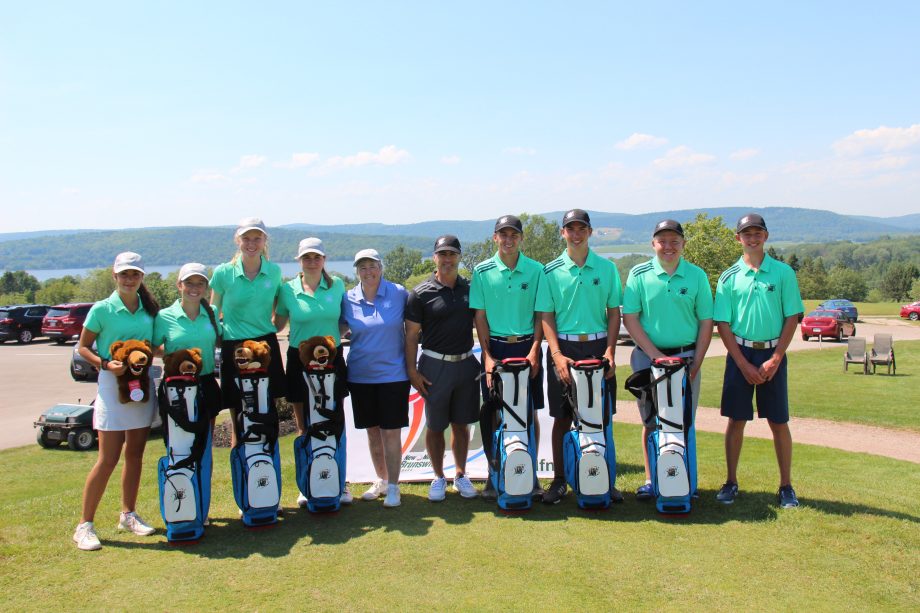 Felix Boucher of Fox Creek would start the day one shot clear of the Miramichi’s Nathan Hogan, and three shots clear of the Pierre-Luc Arsenault of St. Ignace in the race for the 2018 NB Junior Boys crown. Following closely behind in 4th place was 2017 Juvenile and Bantam Boys Champion Daniel Kirby of JH Sports.

Pulling through in his final round was Nathan Hogan of Miramichi Golf & Country club who recorded a 2-over par round of 74 to secure the 2018 Junior & Juvenile Boys Provincial Championship. Hogan’s round would consist of three birdies, five bogeys and ten pars on route to a tournament total of 227. Nathan has now won each division at the Provincial Championships as previously he had won the Pee Wee and Bantam Boys Championships. Finishing in second place in the Junior & Juvenile Boys Division was 2017 Juvenile and Bantam winner Daniel Kirby of JH Sports. Daniel also recorded a 2-over par round of 74 during his final round to put him 4 shots back of Nathan. Hogan and Kirby secured first and second place in both the Junior & Juvenile Divisions with Fox Creek’s Max Gaudet placing third in the Junior Division with a total of 233 and club mate Felix Boucher placed third in the Juvenile Division, fourth in the Junior.

In the Bantam Boys Division, Marc-Andre Gaudet of St. Ignace battled back during the final round recording a 10-over par 82 to capture the crown of 2018 NB Bantam Boys Champion. Gaudet’s event total of 252 consisting of 90, 80 and 82 were enough to put him 4 shots clear of the field. Edmundston’s Brandon Casey finished second in the Bantam Boys Division after a final round 15-over par 87. Finishing third was Ethan McFadden of Moncton who’s finished 5 shots back of Gaudet.

2018 East Coast Junior Girls Champion, Camille Lapierre-Ouellet of Granby, Quebec entered the final round with a two-stroke lead ahead of Gage’s Sarah Holt and Ashburn’s sister duo of Haley and Abbey Baker. However hot conditions and fast greens would see the top of the Junior & Juvenile Girls leaderboard quickly change. Taking advantage of the conditions was Haley Baker of Ashburn Golf Club whose impressive final round score of 1-over par 73 would be enough to secure her first ever NB Junior & Juvenile Provincial Championship. Her three-round total of 233 gave Baker a comfortable 4 shot lead over Gage’s Sarah Holt who finished in second place after a tournament total of 237 and a five shot lead over Camille Lapierre-Ouellet who finished tied for third place. Baker secured the Juvenile Division victory over her sister Abbey who won the Bantam Girls Championship with a final round score of 6-over par 78, leaving her with a 238 total for the tournament. Finishing second in the Bantam Girls Division is Cici Lin of JH Sports who finished the three-round event with a total score of 286.

The Junior Boys and Junior Girls will represent Team NB at the Canadian Junior Boys Championships to be played at the Medicine Golf & Country Club in Medicine Hat, Alberta and the Canadian Junior Girls Championships to be played at the Bach Grove Golf Club in Tsawwassen, British Columbia from July 30th to August 2nd and July 31st to August 3rd respectfully.