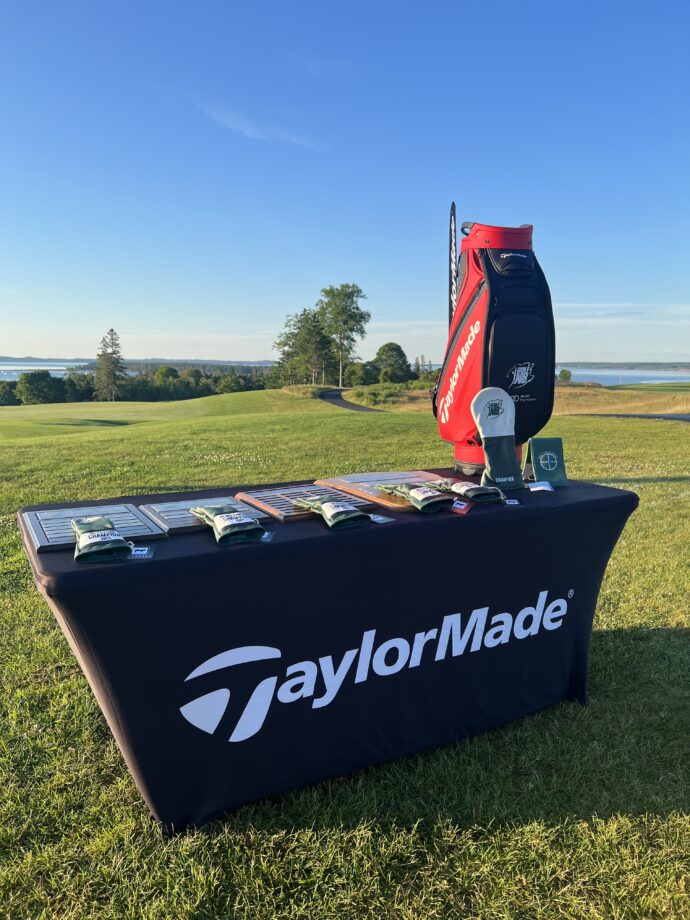 ST. ANDREWS, NB – With a stacked leaderboard following the first 36 holes of the event, the third and final round of the NB Women’s Provincials, Driven by Audi Moncton shaped up to be a true test of championship golf.

Round 3 leaders in the Amateur, Mid-Amateur, and Senior Divisions took to the course at 12:40 and 12:50 PM and were greeted by the natural defense of the Algonquin, high winds, rolling fairways, strategic bunkers, and smooth greens. Featured in the final two pairings were the 2021 NB Women’s Amateur, Mid-Amateur, and Senior Champion, Leanne Richardson of Country Meadows, Petitcodiac’s Laura Wesselius, USGA Member, Chrissie Spidell, Belvedere’s Bailey Carr, NCAA athlete and Fox Creek Member, Julie Gauvin, and Amateur and Mid-Amateur leader, Margo Dickinson.

Continuing with her smooth play, Golf NB Member, Margo Dickinson carded a final round 76 to capture the 2022 NB Women’s Amateur & Mid-Amateur Crowns. A three-round score of 232 (78,78,76) would see Dickinson finish 2 shots ahead of Fox Creek’s Julie Gauvin, who finished in solo second after recording the low round of the event with a +3, 75. Belvedere’s Bailey Carr placed third with a tournament total of +23 after three consistent rounds of 78,81, and 80.

The Mid-Amateur leaderboard matches the Amateur side with the correction of Carr finishing in second place and a two-way tie for third between Country Meadow’s Leanne Richardson and United States Golf Association (USGA) Member, Chrissie Spidell at +24, one stroke behind Carr.

Richardson and Spidell would also highlight the Senior Championship after a sudden-victory playoff between the pair took place to determine a winner on Tuesday. Richardson won on the 1st hole as she edged out friend and competitor Spidell. Rounding out the top-3 was Ashburn Member Cathy Donald who finished 2 shots out of the playoff spot.

The chase for the NB Ladies Super-Senior Crown took all 54 holes as the 2018 NB Super-Senior Champion, Kathy Grebenc of the Gowan Brae Golf & Country Club, and the rest of the leaderboard went head to head for the 2022 title. Grebnc’s 85 and 80 in rounds one and two paired with her 83 in Tuesday’s final round would be enough to edge out the competition and secure the 2022 NB Women’s Super-Senior Title. Finishing in the top 3 alongside Grebenc were Miramichi’s Sharon Case and Lois Stewart of The Riverside.

In the Platinum Division, Pokemouche’s Raymonde Boudreau retained the divisional title after three stellar rounds of golf. Her consistent play secured the victory on the second hole of a playoff against The Fredericton Golf Club’s Penny Dickeson. Rounding out the top 3 in the Platinum Division was Barbara Henderson of the Fredericton Golf Club who finished 1 shot behind the leaders.

The platinum division features players aged 70 and older and has been a well-received addition to the NB Women’s Provincials.

The Dormie Workshop Par-3 Challenge highlights the best scores on all Par-3s during the course of the Championship. Fredericton’s Kris Harvey captured the challenge in the Super-Senior Divison and Golf NB Member and Woodstock Native Margo Dickinson added the Amateur Divison title to her long list of accolades.