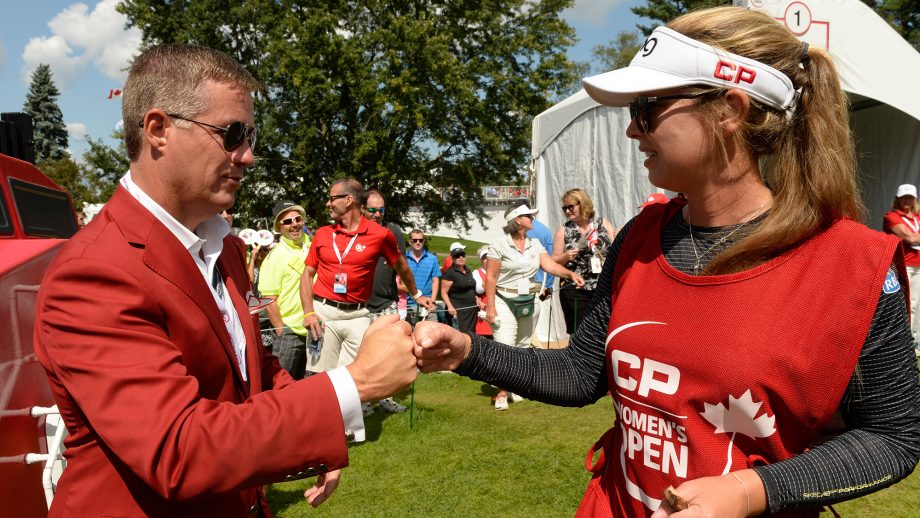 Canadian Pacific (CP), Golf Canada and the LPGA Tour officially announced today that CP has extended its title sponsorship of the CP Women’s Open for five years, beginning in 2019 through 2023. Terms of the partnership were not disclosed.

Since becoming title sponsor of the CP Women’s Open in November of 2013, CP has worked closely with Golf Canada to enhance Canada’s National Women’s Open Championship including the overall experience for players and fans. CP has also established a meaningful charitable legacy through CP Has Heart, which has raised nearly $6.5M for heart health initiatives in the event’s host communities.

“Extending our partnership with Golf Canada as title sponsor of the CP Women’s Open will enable CP to continue to make a significant difference in communities across Canada through our community investment program, CP Has Heart,” said Keith Creel, CP President and Chief Executive Officer. “Partnering with these world-class athletes and this wonderful tournament enhances pride across our company, while building deeper, stronger relationships within the host communities. Since our first CP Women’s Open in 2014 we have raised close to 6.5 million dollars for children’s hospitals and pediatric cardiac care systems across the country, and we look forward to supporting even more young hearts and families in the years to come.”

FIVE. MORE. YEARS. – @CanadianPacific , @TheGolfCanada and the @LPGA Tour officially announced today that CP has extended its title sponsorship of the #CPWO for five years, beginning in 2019 through 2023.

In addition to being title sponsor of the CP Women’s Open, CP is extending its role as a premier partner of Golf Canada’s National Team Program (Team Canada) and the Young Pro Squad which supports emerging Canadian professionals in their transition to the LPGA Tour and PGA TOUR. CP also proudly supports Canadian golf legend Lorie Kane and major champion Brooke Henderson as CP Ambassadors.

CP will also continue its investment as title sponsor of the CP Women’s Leadership Summit which will make its debut on August 21 during tournament week of the 2018 CP Women’s Open at Wascana Country Club in Regina, Sask.

“Canadian Pacific has been an incredible partner supporting excellence in Canadian golf for the past five years and we are honoured to have them continue their title sponsorship of the CP Women’s Open,” said Applebaum. “CP is among Canada’s most respected corporations and as a deeply invested golf partner under the leadership of Keith Creel, their commitment to delivering a world-class experience for players, caddies, fans and charitable beneficiaries, has elevated the status of Canada’s National Women’s Open to one of the premier events on the LPGA Tour.”

As part of CP’s title sponsorship renewal, the purse for the 2019 CP Women’s Open will be $2.25M US beginning in 2019 with a commitment to be among the top-tier purses on the LPGA Tour for the term of the agreement.

“For our players, this championship is a must-play event with great hospitality as well as great history,” said LPGA Commissioner Mike Whan.  “The LPGA’s success is made possible through partnerships like the ones we enjoy with CP and Golf Canada. I’d like to congratulate both CP and Golf Canada on this five-year sponsorship extension.  With CP’s help, we’re proud to continue showcasing the LPGA Tour to millions of golf fans in Canada, across North America and around the world.”

In addition to announcing the title sponsorship renewal, Golf Canada and CP also confirmed today that the 2019 CP Women’s Open will be conducted at the prestigious Magna Golf Club in Aurora, Ontario.

The naming of Magna Golf Club as host of the 2019 CP Women’s Open kicks off an east-west venue rotation over the five-year term to bring the event to world-class facilities in host communities in which CP employees live and work across its network. The 2019 event marks the first time since 2001 that Canada’s National Women’s Open has been contested in the greater Toronto area.

“Magna Golf Club is a truly magnificent facility which will prove to be a world-class experience for the stars of the LPGA Tour,” added Applebaum. “The CP Women’s Open is one of Canada’s premier sporting events and we are thrilled to return to the Toronto area for the first time in nearly 20 years so that golf fans and partners can experience the incredible Magna Golf Club as well as the global excitement of the LPGA Tour.”

In 2019, the #CPWO will be heading to the beautiful @MagnaGolfClub in Aurora, Ont. ??⛳️

“When presented with the opportunity to host the 2019 Canadian Pacific Women’s Open Championship, we were immediately excited,” said Magna Golf Club General Manager and Director of Golf, Stuart Brindle. “The event will allow some of the world’s greatest golfers to experience Magna Golf Club, while making a tremendous impact on our local community.”

The 2019 charitable beneficiary for the CP Has Heart campaign is support of pediatric heart health initiatives will be announced in the coming months.

First conducted in 1973, Canada’s National Women’s Open Championship has allowed the brightest stars of the LPGA Tour to shine on Canadian soil and inspire the nation’s next generation of female golfers.

The 2018 CP Women’s Open will be held August 20-26 at Wascana Country Club in Regina. Additional information regarding tickets, sponsorship or volunteer opportunities can be found at www.cpwomensopen.com.