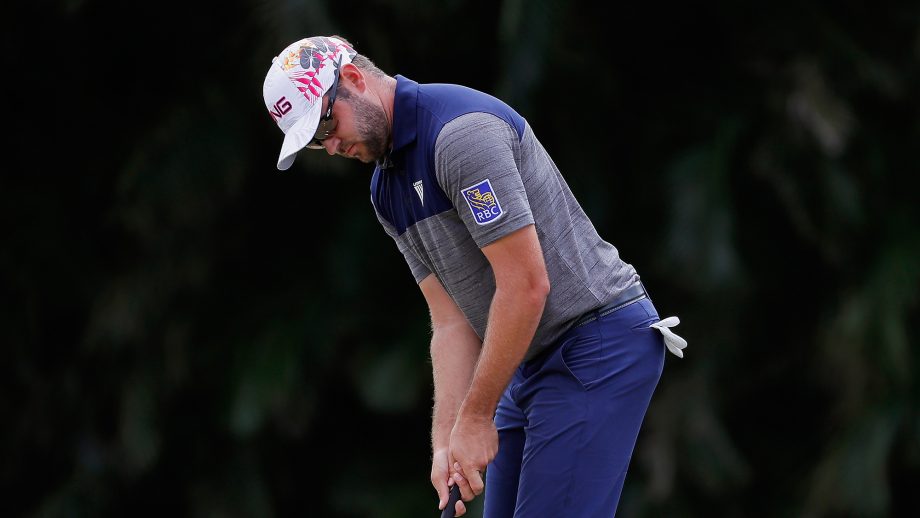 HONOLULU, HI - JANUARY 13: Corey Conners of Canada putts on the first green during the final round of the Sony Open In Hawaii at Waialae Country Club on January 13, 2019 in Honolulu, Hawaii. (Photo by Kevin C. Cox/Getty Images)

The Listowel, Ont., native got into the field via Monday Qualifying, going on to finish in a tie for third at 17 under par. Conners made his most significant move on the weekend, firing matching scores of 64 to rocket up the leaderboard.

With the finish, the 27-year-old Team Canada alumnus sits 19th in the FedEx Cup rankings and moves into the top-200 (No. 181) on the Official World Golf Rankings for the first time in his career. Conners finished five strokes back of champion Matt Kuchar.

He shot 74 on Labor Day and failed to advance out of the second round of the FedEx Cup playoffs for the first time in 10 years. He was never in serious contention all year. The captain’s picks for the Ryder Cup were announced the next day. Kuchar wasn’t even considered, left off a U.S. team for the first time since 2009.

Four months later, the view is so much different.

The rainbow that stretched across the Oahu sky on Sunday looked magical when Kuchar turned to raise his arms after one last birdie for a 4-under 66, which gave him a four-shot victory in the Sony Open.

Kuchar, a member of Team RBC, had gone 115 starts on tour without winning. Now he has won two of his last three.

“Crazy to comprehend,” he said.

This was much harder than reading the fine print that he won by four shots over Andrew Putnam with the third-lowest score in Sony Open history.

Kuchar’s two-shot lead going into the final round was gone in four holes, and when he missed the green on No. 5 with a wedge, he was trailing for the first time all weekend. At the par-5 ninth, Kuchar and Putnam were in the same bunker short of the green. Putnam went first and blasted out to a few inches. Kuchar left his 10 feet below the hole and was in jeopardy of falling two behind.

He made the putt, one of several key moments the rest of the way. And right after Putnam’s lone mistake, a 9-iron into a deep bunker left of the 14th green that led to his only bogey in a round of 68, Kuchar answered with back-to-back birdies and was headed to another victory.

“Thrilled to have won two events this early in the year,” said Kuchar, the first multiple winner on the PGA Tour this season. “It absolutely sets up the year to be in great position for the FedEx Cup. There’s a lot of year left, and a lot of great things that are out there to be done.”

It was only the second time in his career that he had multiple victories. The other was in 2013, when he won the Match Play Championship in February and the Memorial in early June, with three majors still to be played.

Extra special to Kuchar was going up the 18th fairway with a comfortable margin. Winning was never this easy in his previous eight victories.

Then again, part of him likes it that way, whether he’s trying to recover from a bad start on Sunday or even a bad year.

“I love playing golf. I love how hard it is,” he said. “Golf is addictive that way, in that if you’re not playing well you can’t wait to figure it out and make it better. If you’re playing well, shoot, it’s great. It’s awesome. You want it to never end. It’s a cycle of whether it’s good or bad that you have this quest to continue to play, to improve, to fix, whatever it is.”

Kuchar turned 40 last summer, which might have added to the anxiety of going so long without a win.

He never saw it that way. This run began with a visit to his swing coach, Chris O’Connell, right before he began this season. He didn’t score well in Las Vegas and stayed the course. He won in Mexico at the Mayakoba Classic the following week, and then he won again.

“I’m not sure I’m into making a statement, but it is interesting to see how young the tour has gotten,” he said. “But thankfully, golf requires so many different things to be going right. It’s not just power game, a putting game. There are so many facets to the game that it allows people to play for a long time and play competitively and play great for a long time.”

Putnam’s consolation was cracking the top 50 in the world for the first time at No. 45. He won the Barracuda Championship last summer, a month after he played better than anyone except for Dustin Johnson at the FedEx St. Jude Classic.

“I’m feeling a little let down right now,” Putnam said after closing with a 68. “I’m sure when I think about it … a lot of good things have happened. Just needed to make some better swings. Kuch was making birdies and played great coming down the stretch. I just couldn’t keep up with him.”

Kuchar had the gold trophy, the winner’s lei around his neck. He was in no hurry to leave, and plans to stay in Hawaii for another two weeks with his wife and two sons. Even better? He already has earned a spot at Kapalua next year, the tournament reserved only for winners.

“Trust me, getting in the field at Kapalua is a real treat,” Kuchar said.