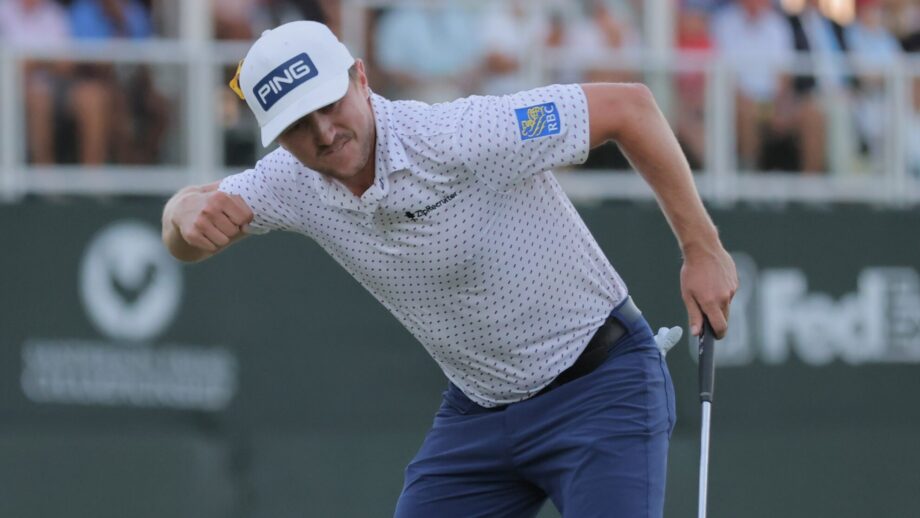 JACKSON, MISSISSIPPI - OCTOBER 02: Mackenzie Hughes of Canada reacts after putting in to win on the second playoff hole against Sepp Straka of Austria on the 18th green during the final round of the Sanderson Farms Championship at The Country Club of Jackson on October 02, 2022 in Jackson, Mississippi. (Photo by Jonathan Bachman/Getty Images)
Golf New Brunswick

JACKSON, Miss. – Mackenzie Hughes of Dundas, Ont, made birdie on his third time playing the 18th hole on Sunday, and it gave him a playoff victory over Sepp Straka in the Sanderson Farms Championship.

Hughes twice had to made tough par saves on the closing hole at the Country Club of Jackson, in regulation from 100 feet behind the green for a 3-under 69 to force a playoff and from a tough spot in a bunker to keep going.

“Yeah, I’m over the moon. I had some moments today where I was tested and was able to pull through,” said Hughes. “It’s kind of my MO a little bit to scramble and save some pars. I had to do that a little bit today on the back nine. I did everything I possibly could, just grinded my butt off, and luckily it was good enough.”

Straka narrowly missed his birdie putt on the second playoff hole from 18 feet on the fringe. Hughes hit his approach to 8 feet and made the winning putt.

The victory comes one week after the Presidents Cup, and Hughes was disappointed not to be included on the International team at Quail Hollow in Charlotte, North Carolina, where he lives.

He wanted to use that as motivation, and it sure worked out that way. Hughes won for the second time on the PGA Tour, both in a playoff. His victory at Sea Island in 2016 didn’t finish until Monday morning, and this looked like it might be headed there with fading sunlight on the last hole they played.

Garrick Higgo of South Africa had a 68 and finished third.

Straka finished two groups ahead of Hughes and missed birdie chances of 20 feet and 18 feet on the last two holes for a 67 to finish at 17-under 271.

Hughes twice came up clutch with his putter down the stretch, even if the putts were for par. He was out of position on the par-5 14th, his wedge over a tree back toward the fairway came up short in a bunker, he had to lay up again and escaped with a 15-foot par putt.

On the closing hole, he was well left off the tee and punched under a tree and over the green against the grandstand. After free relief, he used putter from 100 feet away off the green with perfect pace for par.

On the first playoff hole at the 18th, Hughes came up short in a bunker with only about 15 feet from the edge of the bunker to the pin. He blasted out to 5 feet and made par.

That sent them back to the 18th for a third time, and Hughes closed him out.

Mark Hubbard, who went into the final round with a one-shot lead, managed only two birdies in his round of 74 and tied for fifth.

The final round featured five players who had at least a share of the lead at some point. That included Emiliano Grillo of Argentina, whose round came undone on the par-5 14th when he took a triple bogey without a penalty shot.

Higgo never was part of the lead, though he lingered the entire day and missed an 8-foot birdie putt on the 17th that ultimately kept him out of the playoff.