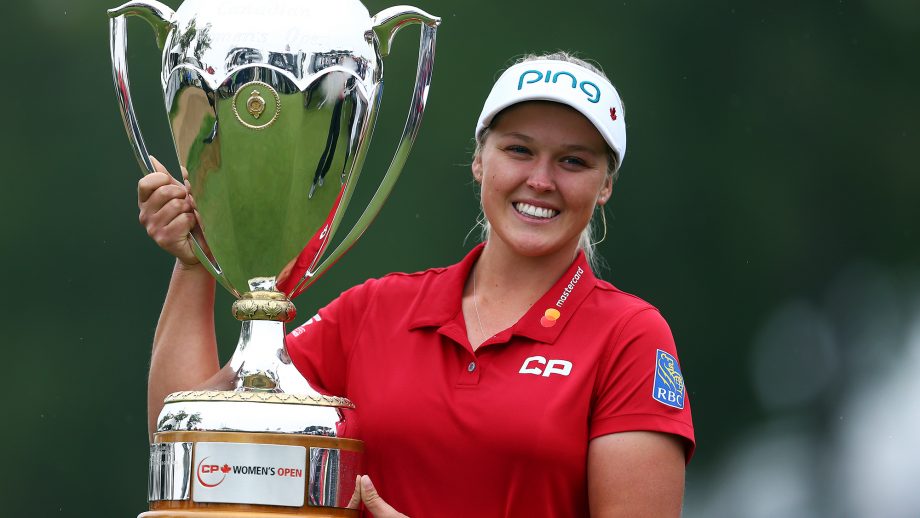 REGINA, CANADA - AUGUST 26: Brooke Henderson of Canada lifts the champions trophy following the final round of the CP Womens Open at the Wascana Country Club on August 26, 2018 in Regina, Canada. (Photo by Vaughn Ridley/Getty Images)

Henderson finished with a 21-under 267 total, sealing the win with a short birdie putt on the 18th hole at the Wascana Country Club.

“It’s amazing, just surreal,” Henderson said. “The crowds here have been so amazing all week, and to finish it off the way I did is really a dream come true.”

American Angel Yin was alone in second place after a 68 and American Jennifer Song (67) was six shots behind at 15 under. Australians Minjee Lee (68) and Su Oh (69) were seven strokes off the pace in a fourth-place tie with South Korea’s Amy Yang (68) and American Austin Ernst (69).

It was the first time a Canadian has won this tournament since Jocelyne Bourassa took the 1973 event – then called La Canadienne – at Montreal.

Henderson earned US$337,500 of the $2.25-million purse for her second victory of the season. It was her seventh career LPGA Tour win, moving her one behind Sandra Post’s record for all-time victories by a Canadian.

Henderson, who started the day with a one-shot lead, was aggressive from the start on an overcast, chilly morning in front of a vocal group of adoring supporters.

CHAMPION! ??? @BrookeHendersonGolf becomes the first Canadian to win the #CPWO since 1973.

Displaying a steely focus and no sign of nerves, she found the fairway with her opening drive and cleared a greenside bunker with her second shot, sticking the ball 12 feet from the pin.

Henderson is one of the biggest hitters on the Tour but her short game can be inconsistent at times. The 20-year-old from Smiths Falls, Ont., set the early tone by sinking the birdie putt for a two-shot lead.

She gave the stroke back on the second hole after her drive found the rough. A line of fairway-hugging trees forced her to chip out on the fairway and Henderson would settle for bogey.

Back-to-back pars followed, allowing Oh to briefly pull even with the Canadian. However, Oh missed a 10-foot par putt on the fifth hole and Henderson drained a 25-footer for birdie to regain the lead.

After a birdie-bogey run, Henderson showed her form on the par-3, 206-yard eighth hole. With a challenging pin placement, she elevated her tee shot perfectly to clear a greenside ridge and bunker to leave herself an 18-foot putt.

She hit the birdie to move to 16-under for a three-shot cushion on Oh and defending champion Sung Hyun Park of South Korea.

Henderson was playing to win and not to just hang on.

A steady rain started to fall as the last few groups made the turn. Some of the Tour’s biggest names were chasing Henderson but no one could get hot enough on the back nine to get close.

Yin hovered a few shots back but Henderson wouldn’t budge.

“It’s great for golf in Canada, women’s golf, and it’s great for her too,” Yin said. “I mean, people shouting her name left to right since the first hole, like (since) nine in the morning. I bet you she feels pressure.

“But she’s used to it and she handles it pretty well, and she finished the job.”

The Canadian was making almost every shot look easy. The greens softened up a touch and Henderson was going for the pins. Approach shots were usually in tight and the putter was working.

Yin rolled in her third straight birdie on No. 15, and Henderson answered by knocking in her fourth birdie putt in a row to keep her three-shot lead.

She maintained that cushion through the 17th hole, allowing her to fully enjoy the moment on No. 18 as the packed gallery roared during her walk up the fairway.

After a beautiful drive, Henderson’s approach shot from 69 yards out cozied up to the hole. She tapped in the short putt and the celebration was on.

Henderson raised her arms in the air and hugged her sister Brittany, who was on her bag all week. Their ecstatic father, Dave, ran on to the green and doused them in champagne.

Park (71), who finished at 13 under, will retain her No. 1 position in the world rankings. She was tied with three-time CP Women’s Open champion Lydia Ko (69) and several others.

American Mo Martin was another shot back at 12 under after firing a course-record 62.

Hamilton’s Alena Sharp (71) was at 6 under, two shots ahead of Quebec City’s Anne-Catherine Tanguay (73).

The 2019 CP Women’s Open will be held at the Magna Golf Club in Aurora, Ont.