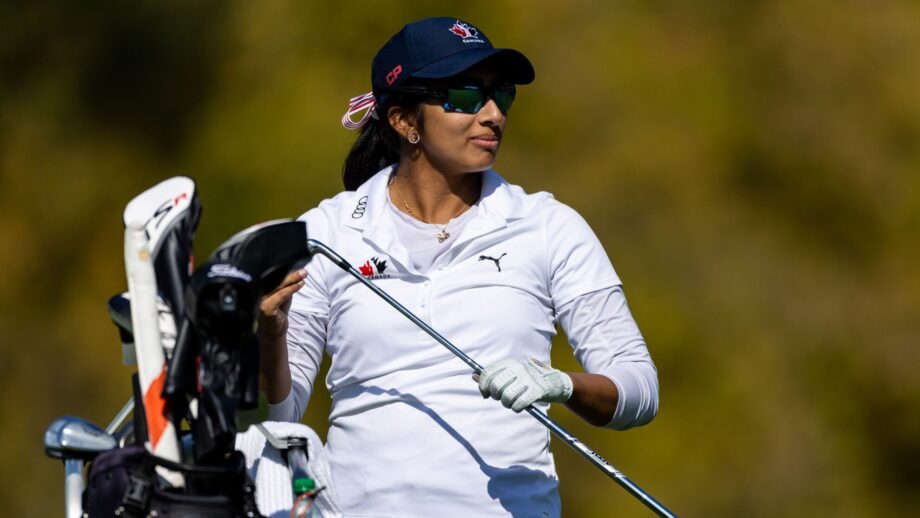 MARKHAM, Ont. – Team Canada entered the opening-round of play at Angus Glen Golf Club looking for a fast start and got just that—riding a sizzling opening-round 4-under 68 by Angela Arora of Surrey, B.C. to take a share of the opening-round lead with Team Spain at the seventh annual World Junior Girls Golf Championship, presented by Sargent Farms.

The Canada 1 squad of Arora (4-under 68), along with 17-year-old Lauren Kim of Surrey, B.C.(E 72), and 15-year-old Michelle Liu of Vancouver (E 72) shot a team-total 4-under 140 with the top two of three individual scores counting towards the overall team total.

The opening-round co-leaders from Spain were led by matching scores of 2-under 70 by Andrea Revuelta and Cayetana Fernández under cool conditions at the Markham, Ont. layout. The pair were joined by teammate Paula Martin who shot a (non-counting) 4-over 76 for the Spanish favourites who came into the championship as the only country with all three players ranked inside the Top-100 of the World Amateur Golf Ranking (WAGR).

Spain is looking for their second team title, having previously won the championship in 2017.

Canada 1 and Spain head into Thursday’s second round with a four-shot lead over Belgium and Chinese Taipei who sit T3 at even par 144 through 18 holes.

As the host nation, Canada is fielding two teams in the international championship and while the Canada 1 squad holds a share of the opening-round lead, it was the younger Canada 2 squad comprised of 13-year-old Anna Huang from Vancouver (E 72), 16-year-old Yeji Kwon of Port Coquitlam, B.C. (1-over 73), and 14-year-old Michelle Xing of Richmond Hill, Ont. (2-over 74) that was equally as impressive, firing a team-total 1-over 145 to sit T5 with Colombia after the opening round of the championship.

With 54 holes still to be played on the South Course at Angus Glen, Canada is looking for their best-ever result in the team competition, having previously finished third in 2014 and fourth in 2018.

The following are round-one team results at the World Junior Girls Championship, presented by Sargent Farms:

In the individual competition, Arora’s 4-under 68 leads by a single shot, followed closely by Savannah De Bock of Belgium at 3-under 69. A trio of players – Ting-Hsuan Huang of Chinese Taipei, along with Spanish teammates Andrea Revuelta and Cayetana Fernández – sit T3 to round out the top-five at 2-under 70 through 18 holes of play.

The following are Top-10 results in the individual competition at the World Junior Girls Championship, presented by Sargent Farms:

Click here for a link to the full individual leaderboard.

In total, 54 athletes on 18 teams representing 17 countries—including two teams from host nation Canada—are competing Oct. 12-15 at Angus Glen for the team and individual titles. The event marks the celebrated return of the prestigious global competition after two years of cancellation due to the pandemic.

The second round of the 72-hole competition gets underway Thursday morning at 8:30am with the final groups teeing off at 9:50am. Admission to the competition is free.

This year’s field for the World Junior Girls Championship, presented by Sargent Farms is highlighted by 11 competitors ranked inside the World Golf Amateur Rankings (WAGR) top 100. A full list of competitors including their WAGR position is here.

A number of players who have competed in the World Junior Girls Championship have gone on great success on the LPGA Tour, led by Canadian Brooke Henderson, a 12-time LPGA winner and world no. 6 who finished fourth in the individual competition at the inaugural championship hosted in 2014.

In addition, 12 players who competed for the 2022 CP Women’s Open at Ottawa Hunt and Golf Club are alumni of the World Junior Girls Championship.

Angus Glen Golf Club, which is hosting the World Junior Girls Championship for the third time, is home to two 18-hole championship golf courses in Markham, Ontario. The North and South courses offer variety, beauty, and challenges. Angus Glen has been ranked as one of the top 80 golf courses in the world outside of the United States. It was home to the 2002 and 2007 Canadian Open and an official host of the 2015 Toronto Pan/Parapan American Games. The 2022 World Junior Championship will be contested on the South course.

Additional information regarding the seventh annual World Junior Girls Championship can be found on the competition’s website.