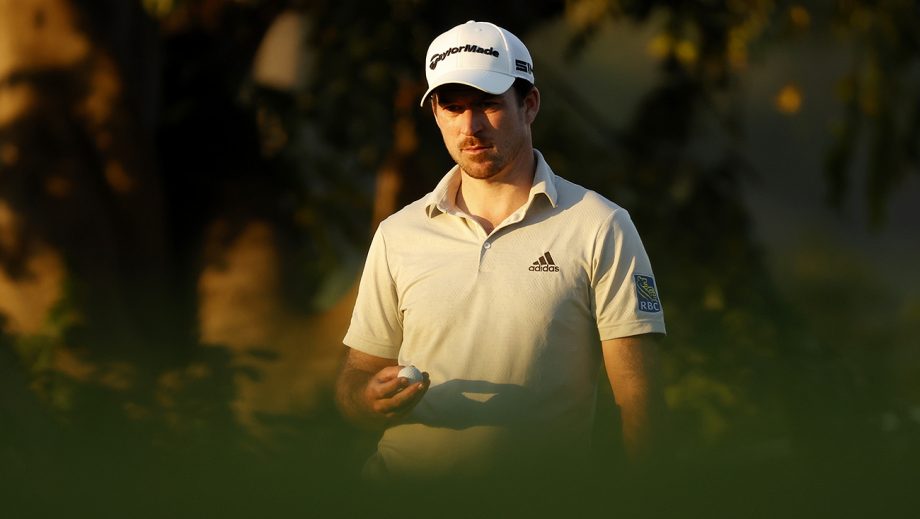 HONOLULU, HAWAII - JANUARY 15: Nick Taylor of Canada prepares to putt on the ninth hole during the second round of the Sony Open in Hawaii at the Waialae Country Club on January 15, 2021 in Honolulu, Hawaii. (Photo by Cliff Hawkins/Getty Images)

Like all other sports leagues, the PGA TOUR keeps on rolling in the face of COVID-19 as they head to Monterey Peninsula for the AT&T Pebble Beach Pro-Am with a twist, no amateurs.

With the tournament feeling slightly more traditional, players will be logging regular rounds over the first two at Pebble Beach Golf Links and Spyglass Hill Golf Club before wrapping the weekend at Pebble Beach.

The biggest news of the week is Dustin Johnson’s withdrawal from the tournament as he opts to rest and spend time with his family coming off a victory at the Saudi International.

His absence leaves Pebble Beach with zero top-10 players as the tournament shapes up to have its weakest field in decades. Patrick Cantlay comes in as the betting favourite who’s currently ranked 11th in the world.

The AT&T Pebble Beach Pro-Am will be played on two courses – three rounds on Pebble Beach Golf Links and one round at Spyglass Hill Golf Club.

Both courses play as Par-72s and are on the shorter end on tour. Pebble Beach is listed at 7,051 yards this week while Spyglass Hill is 6,858 yards.

The two holes to watch will be the 7th and the 18th. The 106-yard par 3 is as picturesque as they come with wind and club selection really being the key. With 18, you get one of the most famous finishing holes of any course on tour – a demanding tee shot that goes over the coastline with only the longest hitters being able to reach in two. It’s the ultimate risk-reward finishing hole.

Considering how short both courses are, the key will be avoiding trouble when attacking the greens. Driving distance is once again less of an advantage this weekend so expect golfers with strong approach games to be in contention. The last three winners have all finished within the top-20 in strokes gained: approach-the-green.

What’s Working – Taylor heads to Monterey Peninsula as the defending champ after an impressive performance last year. He was the first wire-to-wire winner at this tournament since Phil Mickelson in 2005 and was four strokes ahead of runner-up, Kevin Streelman. How did he do it? He was T3 in GIRs and 2nd in strokes gained: putting. That’s a winning formula at any course on tour.

Best of luck to our boy @ntaylorgolf59 who looks to become the first player to successfully defend his title at the @attproam since DJ in 2010 pic.twitter.com/QWfygGEag8

What He’ll Need – Last season he came into this tournament with similar momentum; he made 5-of-8 cuts with a T10 finish as his season-best up to that point. This year, he’s made 6-of-10 cuts with a T11 finish at the Sony Open in Hawaii. Putting seems to have the biggest correlation to his success of late. In his last three made cuts, the Winnipeg native ranked 50th, 5th and 11th in strokes gained: putting. At the Waste Management Open, he was 103rd before missing the cut by one shot.

What’s Working – The Calgarian is having his best season ever off the tee (41st on tour) anchored by his irons. With Pebble Beach’s well-protected greens, his precision will be necessary to stay out of trouble and keep bogey-free.

What He’ll Need – This can be said for any tournament, but Sloan will need to get hot with his putter. So far this season, he’s trailing tour average in putting stats but if he can find his form at Pebble Beach, he should be in the mix. In three of his last five cuts made, his ended up carding his lowest round on day one. His best opening round this season is 67 so if he could post a similar score, that success could snowball into his other rounds over the weekend.

What’s Working – After missing the cut by a stroke in Hawaii and finishing T64 at The American Express, Hearn’s putter couldn’t save him in his last appearance at the Farmers Insurance Open. On the year, Hearn’s putting is 12th best on tour and he’ll need that form to return at Pebble Beach. Even though he’s never profiled as a bomber off the tee, his accuracy is amongst the very best as he’s ranks 24th this season in driving accuracy.

What He’ll Need – The 19-year pro will need to capitalize on all those fairways he hits and translate those lies into GIRs. As Jordan Spieth demonstrated this past week, if your putter is on, you’ll be in contention. With both courses this weekend registering on the shorter side, this could be a great bounce back spot for Hearn.

What’s Working – Gligic continues to profile as one of the better drivers on tour as he ranks 23rd in the PGA for strokes gained: off-the-tee. He’s hit 69 percent of his GIRs over 28 rounds, which would be a career-best if the season ended today.

What He’ll Need – His putting will dictate his success this week. Looking at his scorecard from the Farmers Insurance Open, it’s easy to see how the tourney got away from him. Through his first six holes of the tourney, he was four over after three-putting the first three and four-putting hole 15 (he started on the back).

Notables in the Field

Patrick Cantlay – The top ranked player in the field, Cantlay comes into Pebble Beach in top form. He’s already logged a win this year at The ZOZO CHAMPIONSHIP back in October and finished second in his most recent PGA event – The American Express. His game currently has no weakness as he ranks 11th on tour in strokes gained: total. He’s fifth in strokes gained: around-the-green which will be in play at Pebble Beach more so than other stops on tour.

Phil Mickelson – A five-time winner of this event, in his age-50 season, Mickelson still profiles as a legitimate threat to take home the trophy. Sure, he hasn’t been his best in 2020-21, but on a course that requires such a variety of shots, no one would be shocked to see him take home the top prize. He’s finished top-3 in four of the last five tourneys.

Jordan Spieth – The most compelling story from last weekend prior to Brooks Koepka stealing the show, Spieth will hope to continue his resurgence after finishing T4 in the final grouping. While he made several highlight worthy putts, it was his approach game that kept him in contention finishing number one in strokes gained: approach to the green.