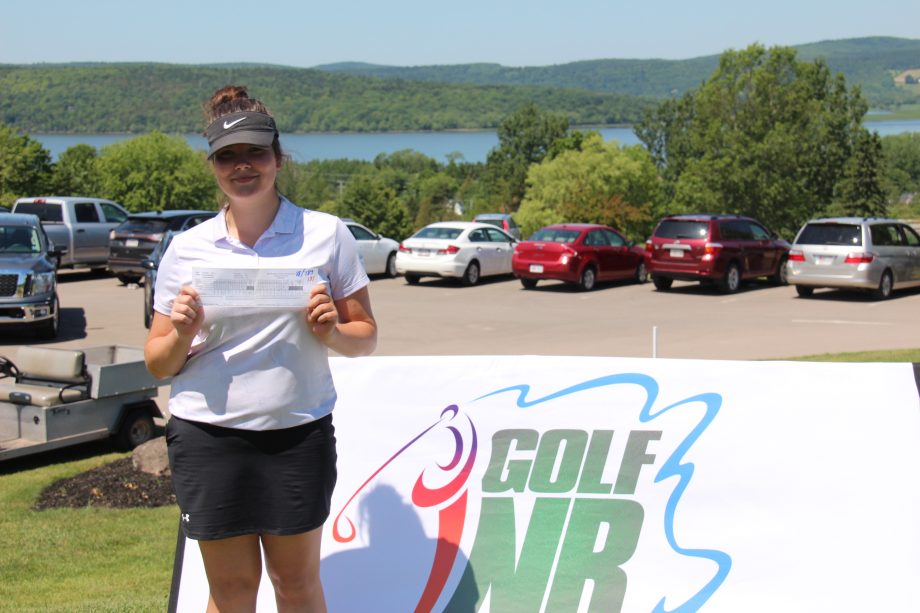 Lin, who is fresh off of a good performance in the Pee Wee Girls division at the Covered Bridge East Coast Junior Championship, would cement her victory after finishing off the tournament with a final-round score of 22 over-par 94 combining with her first round 25-over par 97 to bring her to 191 for the event.

Chase Burgess bettered his first round 16 over par 88, by 12 shots to card a second round four over par, 76 and a two-day tournament total of 20 over par 164 total to capture his first NB Pee Wee Boys Championship. Burgess’s final round would consist of nine pars, five bogeys, two birdies and a double bogey on the par-4 2nd. Holding down the second-place spot, is the Gowan Brae’s Antoni Leblanc.

After round 2, Ethan McFadden of Moncton Golf & Country Club is leading the Bantam Boys Division at 24-over par. Ethan recorded a 14-over par 86 during his Wednesday round after running into some bogey trouble. One shot behind McFadden is Brandon Casey of Fraser Edmundston who also shot a 14-over 86 to add to his first round 83.

In the Junior and Juvenile Boys Division, Felix Boucher of Fox Creek is in 1st place heading into the final day after a second-round score of 3-over par 75. Felix would move his way to the top of the leaderboard with nine pars, four birdies, three bogeys and two doubles leading to a two-round score of 152 putting him one stroke ahead of the field. Following close behind is fellow juvenile boy, Nathan Hogan of Miramichi who recorded a 5-over par 77 during round two which was comprised of nine pars, three birdies, four bogeys and two doubles on the par-4 12th and 14th. In third place is Pierre-Luc Arsenault of St. Igance who also finished his second round with a score of 5-over par 77, 155 total. Closing in on the top three is 2017 Juvenile and Bantam Boys Champion Daniel Kirby of JH Sports at 13-over.

In the Junior Girls Division, Camille Lapierre-Ouellet of Granby, Quebec leads after round 2. Camille responded after her first round 84 with a 2-over par 74 on a hot and humid Wednesday morning at Hampton Golf Club. She would complete her second round with an eagle on Hampton’s famous par-6 6th hole, four birdies, six bogeys and a double on route to her 74. In a three-way tie for second place is Sarah Holt of Gage Golf & Curling Club who recorded a 9-over par 81 during round 2, putting her at 16 over for the tournament. Alongside Holt in second place are sisters Abbey and Haley Baker of Ashburn Golf Club. Abbey, competing in the Bantam Girls Division recorded a 7-over par 79 during round 2 complementing her first round of 81. She currently leads the Bantam Girls Division by 31 strokes and is also tied for 1st with her sister Haley in the Juvenile Girls Division. Haley fired a 5-over par 77 during her second round, putting her at the top of the leaderboard in the Junior and Juvenile Divisions.

Amelie Guitard of Royal Oaks had a hole in one during the final stretch of her second round. She aced the par-3 17th hole from 105 yards away with a 9-iron.

The round of the day belonged to the Camille Lapierre-Ouellet of Granby, Quebec who posted a two over par 74. Camille would use the round to jump into solo position of 1st, two shots clear of Gage’s Sarah Holt and Ashburn’s Haley and Abbey Baker.

The top three finishers in both the Junior Boys and Junior Girls divisions will represent New Brunswick as Team NB at the Canadian Junior Boys Championships to be played at the Medicine Golf & Country Club in Medicine Hat, Alberta and the Canadian Junior Girls Championships to be played at the Bach Grove Golf Club in Tsawwassen, British Columbia from July 30th to August 2nd and July 31st to August 3rd respectfully.

The third and final round of the 2018 Golf NB Junior Championships will get under way at 8:00am on Thursday July 5th off of both the 1st and 10th tees.