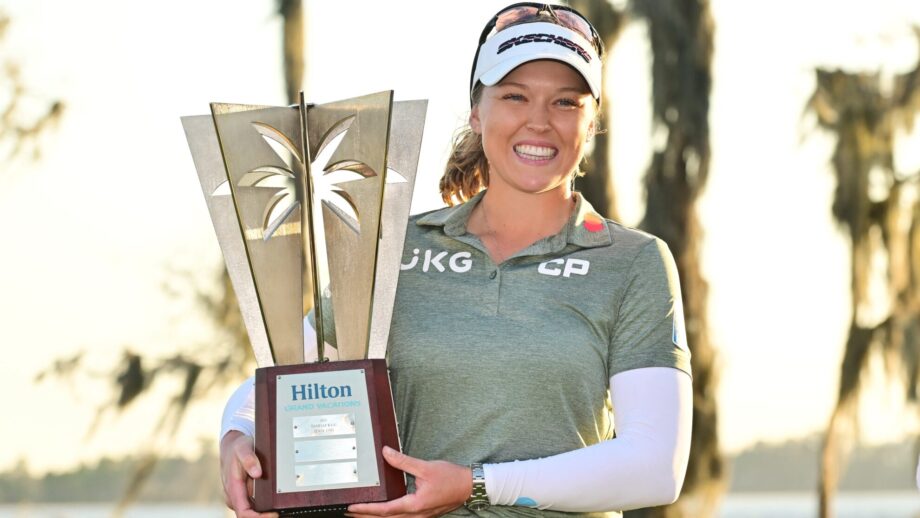 ORLANDO, Fla. – Brooke Henderson has had the Hilton Grand Vacations Tournament of Champions circled on her calendar for eight weeks.

The Canadian golf superstar has always enjoyed the elite, 29-player pro-am event that starts the LPGA Tour season, but had never won it. She was also looking forward to returning to competitive golf after playing through a sore back at the season-ending CME Group Tour Championship on Nov. 19.

She more than met that challenge.

Henderson led the Tournament of Champions from wire to wire, finishing the fourth round 2-under 70 on Sunday for an overall score of 16-under par, four shots better than Sweden’s Maja Stark and England’s Charley Hull. Her 13 professional victories are the most in Canadian golf history.

“I was really looking forward to playing this week,” said Henderson. “I always love this event. It’s so unique and fun playing alongside celebrities and the atmosphere, it’s just a lot different than a regular LPGA tournament.

“To come out and win this week is really the dream start to 2023 and hopefully I can just keep it going.”

Henderson, whose 13 professional wins are the most in Canadian golf history, said it’s a goal of hers to win at least two tournaments each year.

The 25-year-old from Smiths Falls, Ont., won twice on the LPGA Tour last year, at the ShopRite LPGA Classic on June 12 and the Evian Championship on July 24.

“My goal is always to win a couple of times every year, hopefully more than twice, so maybe this year will be the year when I can win more than twice out on tour,” said Henderson, who said that she and her sister Brittany, who serves as her caddy, are looking forward to playing the Honda LPGA Thailand on Feb. 23 and the HSBC Women’s World Championship on March 2.

“Hopefully we’ll be able to go out there and continue the momentum that we built up this week, and fire some low scores and see what happens.”

On top of addressing her ailing back, Henderson switched to TaylorMade clubs and had her wisdom teeth pulled during the winter break.

“The off-season was really busy. Lots of things happening, a lot of big changes,” said Henderson. “But I couldn’t be happier with the start this week with the new clubs and I felt confident with them.”

Stark has committed herself to adding multiple hours each week to her time spent practising putting, and it showed in her hot play over the final nine holes. Three over through seven, she birdied six of her final 10 holes.

“It gives me a lot of confidence,” Stark said. “I feel I’ve had a good week with my driver and some good irons. The putting, too. I feel like if it keeps going like this, it could be the best year yet.”

Hull was pleased with her finish given the challenges of trying to get her game ready in England in mid-winter. She spent three days practising in Morocco before continuing on to Orlando.

Retired tennis player Mardy Fish of the United States won the celebrity side of the pro-am tournament. He ran away with the celebrity division, making 152 points in the Modified Stableford format. Fish also won the title two years ago. Former MLB pitcher Mark Mulder (136 points) was runner-up.

Annika Sorenstam, a 72-time winner on the LPGA and Lake Nona resident who played among the celebrities and athletes, tied for third with military veteran Chad Pfeifer.