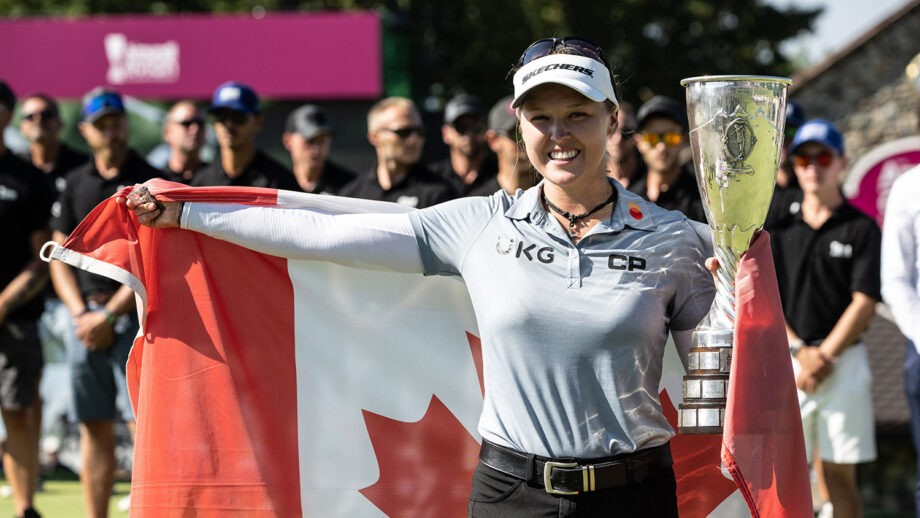 The Canadian ended a wild final round at the Evian Championship by rolling in an 8-foot birdie putt at the 18th hole to win by one stroke on Sunday.

Henderson, a native of Smiths Falls, Ont., was soaked in champagne by fellow players on the 18th green after an even-par round of 71 that saw her finish on 17-under 267 and ahead of Sophia Schubert, an LPGA rookie who was one of many to make a run at Henderson at Evian Resort Golf Club.

Henderson, who won the Women’s PGA Championship in 2016 at the age of 18, started the final round with a two-shot lead over So Yeon Ryu. It was wiped out after the first hole thanks to a birdie from Ryu and a bogey from Henderson.

So began a crazy final round of the fourth major of year, featuring four-putts from Henderson and Ryu, a spectator picking up a ball that dribbled into the rough and landed by her feet and _ at one stage on the back nine _ a seven-way tie for the lead.

In total, there were 13 changes of leader, with Henderson only knocked out of it – briefly – when Schubert (68) made birdie at No. 12 to move onto 15 under.

Henderson held herself together and managed to keep pace with Schubert with birdies at Nos. 14 and 15. The pair were tied for the lead after reaching the 18th, with Schubert playing in the group ahead of Henderson.

Schubert’s birdie putt came to rest barely an inch from the cup just after Henderson had a wild hook off the tee, only for the ball to ricochet off the trees and back out to the rough.

Henderson laid up and, from 107 yards, sent her third shot to 8 feet. The birdie putt never looked like missing and Henderson bent her knees as the ball fell into the cup.

She was a major winner again.

Henderson will headline the stellar field teeing it up at the CP Women’s Open in Ottawa at the Ottawa Hunt and Golf Club from Aug. 22-28. Click here to purchase tickets.