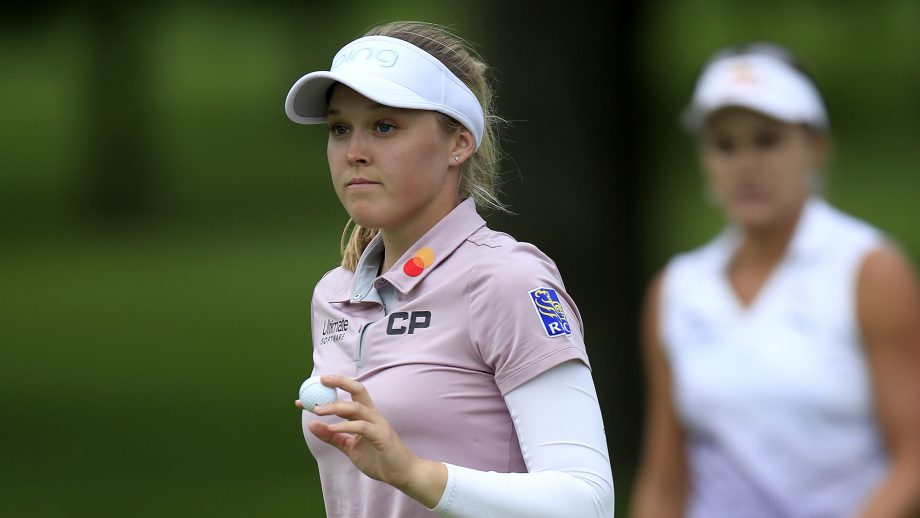 GRAND RAPIDS, MICHIGAN - JUNE 14: Brooke Henderson of Canada waves to the crowd after making birdie on the 17th hole during the second round of the Meijer LPGA Classic at Blythefield Country Club on June 14, 2019 in Grand Rapids, Michigan. (Photo by Andy Lyons/Getty Images)

AURORA, Ont. – When she was just 10 years old, Brooke Henderson’s dad Dave took her to an LPGA event where she briefly met her idol Morgan Pressel. Pressel spoke to Henderson about her golf game, took a picture and autographed her shirt.

Now 21-years old, ranked No. 8 in the world, and with the most wins in Canadian pro golf history, Henderson sees it as her responsibility to create memories for her young fans like Pressel did for her.

“When I first met her, she spent that little bit of extra time with me, signed my shirt, took a picture with me, it was just a really incredible moment that I’ll remember forever,” said Henderson on Tuesday. “I think now I’m just trying to pay that forward to every little kid that I meet.”

Henderson will easily be the most popular player at the CP Women’s Open at Magna Golf Club in Aurora, Ont., this August, and will have plenty of opportunities to interact with her fans, most of whom are children.

“It’s really special to see those young kids, when they want my autograph or they want a picture with me it’s sort of surreal but it’s really inspiring for me,” said a beaming Henderson. “I do think that the LPGA is very approachable. We love little kids and we love spending time with them.

“I think that’s kind of what separates our tour from a lot of other major sports.”

The CP Women’s Open has not been in the Greater Toronto Area since 2001, when Annika Sorenstam won at Angus Glen Golf Club in Markham, Ont. Because of Henderson’s popularity among Canadian fans and its proximity to Canada’s largest city, it’s expected that it will be one of the best attended events on the LPGA Tour’s calendar this year.

Charlottetown’s Lorie Kane, who will be playing in her 29th CP Women’s Open, thinks the timing couldn’t be better for the popularity of the sport in Canada.

“It’s time that we came back to the GTA. It’s time for women’s golf to be elevated one more level in this country,” said Kane, raising her hands for emphasis. “We all know in this room that (Henderson) is changing the way people see women’s golf in our country.

“We’ve been trending in the right direction but why do we keep saying that? We’re in a really awesome place.”

Golf Canada, the LPGA, and Canadian Pacific railways – the event’s title sponsor – announced on Tuesday that the field at the US$2.25 million tournament will include 15 of the top 20 golfers on the LPGA’s money list, and 90 of the top 100.

“I love it. Being able to beat the best in the world is one of the best things about this sport,” said Henderson. “To tee it up and know that you are playing the best and that you have to play really, really, well and hit shots that you’ve never hit before and shoot low scores, make a ton of birdies, that’s really exciting.”