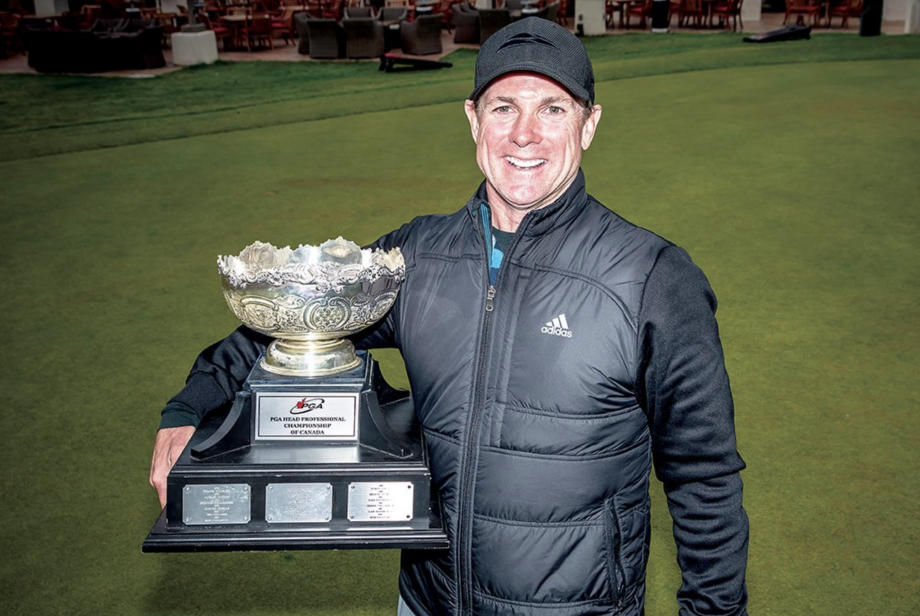 Brian McDonald claimed his first national title at the PGA Head Professional Championship of Canada presented by Titleist & FootJoy Thursday as he closed with a 5-under-par 67 for a five-shot victory.

The Director of Golf and General Manager at Fairview Mountain in Oliver, B.C., featured five birdies in his final round at The Gold Course at Wigwam Golf Club, coming from behind to raise a PGA of Canada national championship trophy for the first time in his career.

“If you would have told me at the start of this week that I’d be a national champion when it was all said and done, I wouldn’t have believed you,” McDonald admitted after his final round. “But when I made the turn today I told myself if I kept to my game plan, I would take this championship home to British Columbia.”

McDonald was one of 18 players in the field from British Columbia. His friend and fellow B.C.-native Matt Palsenbarg finished second at -6 after a final round 64 (which was also the low round of the championship).

“Honestly, everyone wants to win, but the support I received last night and this morning from all my fellow pros from B.C. was just amazing,” McDonald said. “They were pulling for me, coaching me and that really means the world to me.”

Gordon Percy of Carleton Golf and Yacht Club in Ottawa, who lead heading into Thursday’s final round, finished alone in third at -5. Ian Leggatt of Ontario and Manitoba’s Dean North finished T4 at -4.

With the win this week at The Wigwam in Litchfield, Ariz., McDonald pads his already impressive PGA of Canada professional resume.

“The win this week means so much to me as a golf professional,” McDonald said. “I’m a very proud PGA of Canada member and knowing that I’m a national champion I can always hang my hat on that . . . and no one can ever take that away from me.”

The 36-hole Inter-Zone competition compiled of four players on each team representing their respective PGA Zone was decided Wednesday.

The squad from Ontario (Burns, John Cochrane, Brian Hadley and Danny King) won for the fourth-straight year. The squad from Quebec finished a stroke back with Saskatchewan rounding out the top three.

This year’s championship saw a few changes—both on and off the golf course. Firstly, the low club professional (McDonald) was recognized with a separate trophy and monetary bonus. Secondly, all competitors were treated to a number of parties hosted at The Wigwam and the Arizona Coyotes.