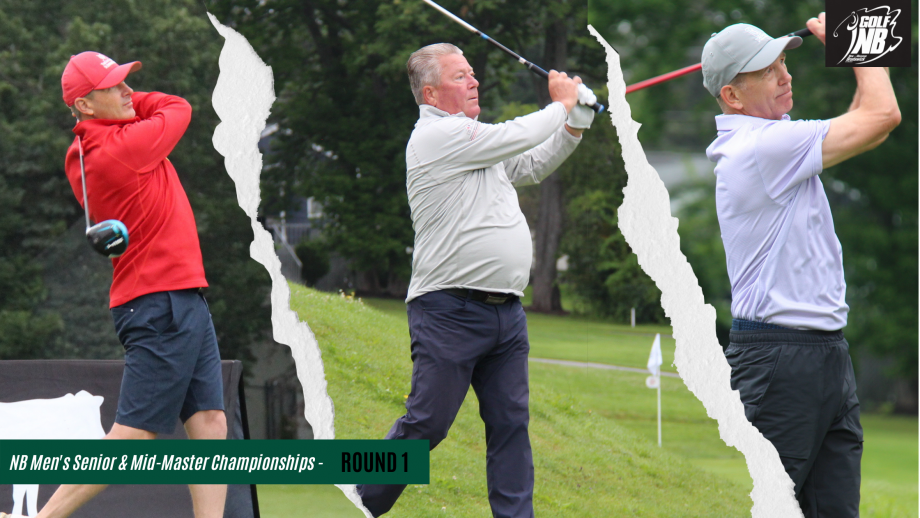 FREDERICTON, NB: A gloomy morning in the province’s capital greeted players for the opening round of the 45th NB Men’s Senior & Mid-Master Championships. 140 players converged at the Fredericton Golf Club for this year’s event as many looked to challenge for the Mid-Master, Senior & Super-Senior titles.

Monday’s opening round began at 7:00 AM with the Mid-Masters leading the field. Game #1 featured 2020 Champion, Stuart Musgrave of Country Meadows, Riverside’s Ed Reevey, and Tony MacKinnon of West Hills.

Reevey’s Riverside clubmate, David Russell stole the spotlight after an impressive opening round, 2-under, 68. A smooth 1-under front and 1-under back nine safely position the Quispamsis native on top of the Mid-Master leaderboard. Sitting 6-shots behind Russell is Restigouche’s Darren MacPherson who recorded a 4-over, 74 on Monday. Tied for third place after round 1 are West Hills’ Tony MacKinnon and Hampton’s Aaron Cole who both shot opening round 75’s.

A mid-day weather delay caused a momentary disturbance to play during round one. With the helping hands of the top-notch Fredericton Golf Club staff, players were able to return to the play once all standing water had been removed from the putting surfaces.

In the Senior Division, 2020 Senior & Super-Senior Champion, Gary Melanson accompanied by his trusty hickory golf clubs, led the championship flight off in Game #11. Joining him would be The Algonquin’s Mike Fernie and Hampton’s Darren Ritchie.

The early games in the Senior field would see their play come to a halt due to Monday’s weather delay. Unaffected however were Ashburn’s Paul Batchelor and Golf Canada Club Member, Richard York. The pair both lead the Senior Championship after opening rounds of 1-over, 71’s. One-shot behind the leaders are Grand Falls’ Denis Beaulieu, Gage’s Tom Cameron, Fredericton’s own, Sonny Phillips, and Fox Creek’s Mike Jeffrey who all signed for 2-over, 72’s.

Batchelor’s play sees him also take the top spot in the Super-Senior Championship, Fredericton’s Sonny Phillips sits close on his heels at 2-over par, one shot back. Rounding out the top-3 are Royal Oaks’ Mike Hosford, Herring Cove’s Kevin Farmer, and Moncton’s Brent Wilson who all fired opening rounds of 8-over, 78.

Round 2 begins on Tuesday, July 27th at 7:00 AM with the Senior field leading the way, followed by the Mid-Masters. To follow along with the action, use GGID: GOLFNBMID/SR.