Baker Leads the Junior Girls and Four Tied at the Top of the Junior Boys at the Future Links, driven by Acura, Atlantic Championship 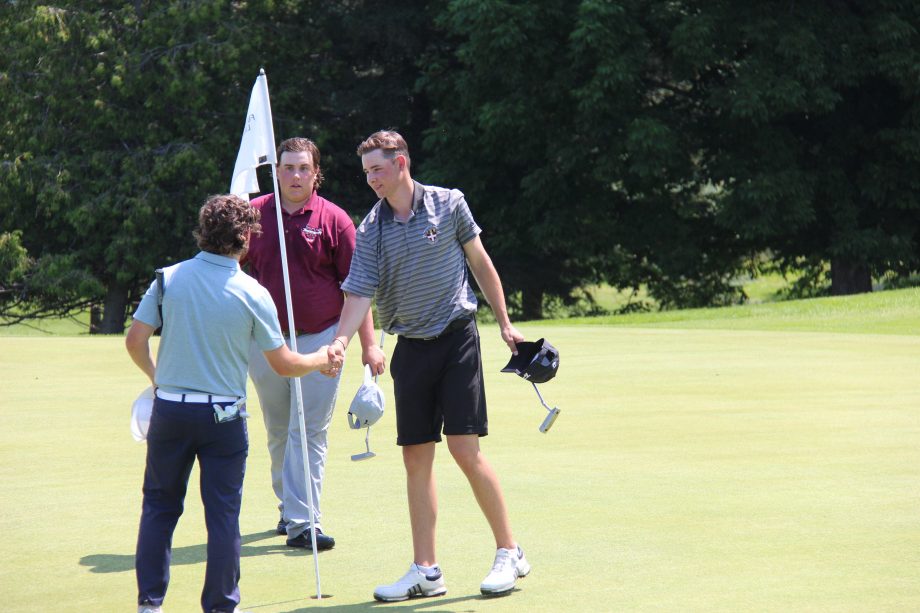 Day 1 at the Future Links, driven by Acura, Atlantic Championship started with a wonderful day of weather and great scores at the Covered Bridge Golf & Country Club in Hartland.  The Championship brought together junior golfers from New Brunswick, Prince Edward Island, Nova Scotia, Quebec and Ontario. There are four players at the top of the Junior Boys leaderboard with Daniel Kirby, Ben Callaghan, Felix-Antoine Levasseur and Jack Smith as they all shot a 2-under par 70.  Kirby who represents JH Sports and plays out of the host club had a bogey on hole # 4 but his back to back birdies on holes # 7 and # 8 gave him a 1-under par 35 on the front nine. He had a very clean scorecard on the back nine with 8 straight pars and a birdie on his final hole for a 1- under par 35 to add up to his 70. Ben Callaghan who is a member at the Abercrombie Country Club in Stellarton, NS was 2-under after 7 holes with the help of birdies on the 2nd, 6th, after a par on 7 he had his lone front-nine bogey on the 8th hole. He bounced back with birdie on nine which gave him a 2-under par 34. His 2 birdies and 2 bogeys on the back nine added up to an even par 36 to give him his 70. Felix-Antoine Levasseur from Le Club de Golf Godefroy in Bécancour, QC bogeyed his 2nd hole but then followed that up with a birdie on # 3 and another on # 9 for a 1-under par 35. His inward nine consisted of 8 pars and a birdie on the tough hole #16 for a matching 1-under par on the back for his 2-under total of 70.  Jack Smith who is a member of the Ashburn Golf Club had 8 pars on the front nine and 1 bogey for a 1-over par 37. He caught fire on the back nine with 4 birdies on holes # 10, #13, #14 and #17 and just one bogey on hole # 16 for the best back-nine score of the day, a 3-under par 33 for his 70.

There are two juniors just a shot back at 1-under par, 71, Rory White who is a member at Oakfield Country Club in NS had 3 birdies and 2 bogeys and Ewan Jr Kelly of the Ashburn Golf Club shot 4 birdies and 3 bogeys. Another three golfers, Hunter Baird of the Whistle Bear Golf Club in Cambridge, Ontario, Nick Ritchie from the Hampton Golf Club and Owen Mullen who hails from the Truro Golf Club in NS all shot an impressive even par 72 on Day 1 as well. This tournament will continue to be exciting over Day 2 and Day 3 as long as the weather doesn’t play a factor.

Haley Baker, who is no stranger to Covered Bridge after winning the East Coast Junior Girl’s Championship here last month, continued her good play. Haley who plays out of the Ashburn Golf Club in Halifax, NS started out with a birdie on the first hole and had another on the 5th hole but mixed in three bogeys on the front on holes #2, 4 and 6 for a 1-over par 37. Her inward nine saw a birdie on the tough par 3, 17th hole, 6 pars and bogeys on holes 11 and 18 for another 1-over par 37 which adds up to a 2-over par 74. Abby Baker, Isabella Ferguson from the Kanata Golf & Country Club in Kanata, Ontario and Fox Creek’s Julie Gauvin are three shots back after shooting 5-over par 77’s.  Abby ran into a little difficulty on her outward nine with a 6-over par 42 but she found her rhythm on her inward nine. She managed 3 birdies on holes 11, 15 and 18 but her only hiccup was a double bogey on the 12th hole but she still had an impressive 1-under, 35 on the back nine for her 77. Ferguson started off with a birdie on #1 but then bogeyed #3 and #4 to shoot a 1-over, 37 on the front nine. Her back nine brought on 6 pars, 2 bogeys on # 10 and # 16 and a double bogey on #13 for a 40 on the back to add up to her 77. Gauvin 9-hole scores matched that of Ferguson as her 37 on the front also included a birdie on hole # 1 but her bogeys were on holes #3 and #7. Gauvin’s 40 on the back was made up of 5 pars and bogeys on #10, #12, #15 and #16 to make her 77. Last week’s NS Junior Girl’s Champion, Heather McLean is another 2 shots back after shooting a 79.
There are two more days of action here at the Covered Bridge Golf & Country Club.

The golf course is in great shape, and the volunteers and staff are getting a good practice run as they will be hosting the Canadian Junior Boys Championship August 12-15th. Golf NB and Golf Canada are grateful to Covered Bridge for hosting 3 championship golf tournaments this summer.