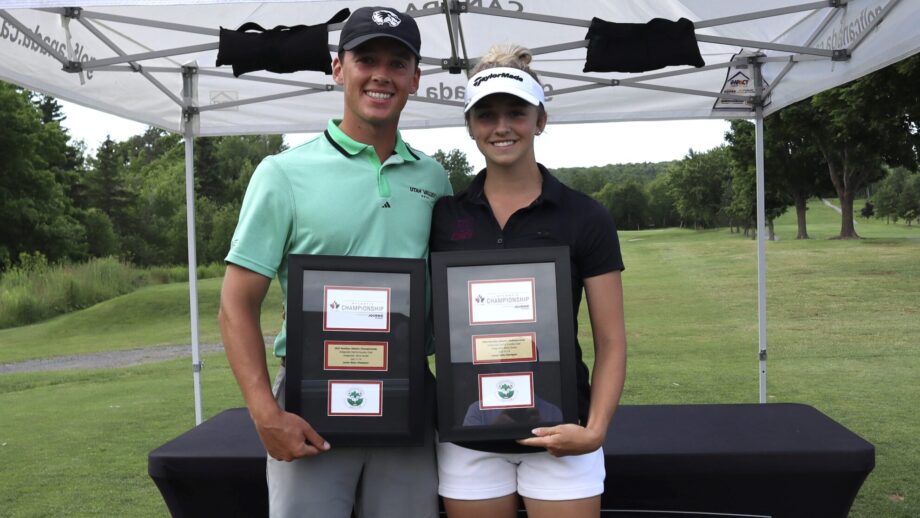 ANTIGONISH, N.S. – Albeit contrasting flight paths, Abbey Baker and Ethan Efford landed in the same destination on Thursday: in the winner’s circle at the NextGen Atlantic Championship, fueled by JOURNIE Rewards.

It was steady cruising for Baker, who turned it to autopilot and let the wind take her to the finish line at Antigonish Golf Club; and while Efford hit turbulence along the way, he, too, made it to ground safe and sound with a championship, to boot.

Baker opened the tournament with a nine-over par 81 but rebounded wonderfully in the second round with a one-under par 71 – the only round under par on the Junior Girls side all week.

“I’m really happy with how I recovered after a very rough first round. I came back after shooting 81 and worked on my putting for a while and I definitely saw a lot of improvements which is nice,” said Baker.

With breathing room to spare, the 17-year-old sailed to the stopping place, closing out the tournament with a five-over par 77 for a 13-stroke triumph – the largest margin of victory at any NextGen Championship this year.

“It wasn’t really in my head that much,” said Baker of the large lead. “I was just trying to make birdies out there and play good for myself.”

Though it was hardly ever in doubt, Baker’s win in Antigonish officially landed her a spot on Team Nova Scotia for the upcoming 2022 Canada Summer Games in Niagara, Ont., August 17-20 at Legends on the Niagara (Battlefield Course).

The leaderboard on the Junior Boys side was as packed as sardines. On any given hole, the name atop the leaderboard changed, but when the final ball dropped on the 54th hole, it was Ethan Efford who prevailed.

In good Canadian form, Efford completed the hattrick on Thursday, carding his third consecutive round of four-over par 76 to capture the title by one stroke over Dimitri Mihelakos, Gavin Ives and Owen Canavan.

“I told myself on the first tee that I wanted to get through this whole round and commit to every single shot,” said Efford. “I knew it was tight and I knew that if I go out there and commit to every shot and maintain the confidence that I have in myself, I know that at the end of the day, whatever my score is I’ll be content with it.”

Since he tee’d off this morning, it took, in his words, a lot of grit and grind to come out victorious but the hard work paid off.

“I knew that no matter what, I just [had] to stay in it and never give up, and that’s just how I took it – one shot at a time and in the end I was happy with the result.”

Efford says the win proves his game is in a much better spot than he might feel it is and looks to build off the momentum as the season progresses. Though in a different uniform, he, like Baker, will represent his province (Newfoundland and Labrador) at the Canada Summer Games in August.

The pair have one more stop to make before that, however: Nationals.

Including Baker, the top six players (including ties) in the Junior Girls division have earned exemptions into the 2022 Canadian Junior Girls Championship:

About the NextGen Championships series, fueled by JOURNIE Rewards

The NextGen Championships, fueled by JOURNIE Rewards is a high-performance junior golf series which totals eight competitions. From May to July, six championships will take place across Canada where the region’s best junior golfers will compete to earn exemptions into their respective 2022 national championships. NextGen Championships provide junior players an opportunity to develop and showcase their skills at the highest level of tournament golf.