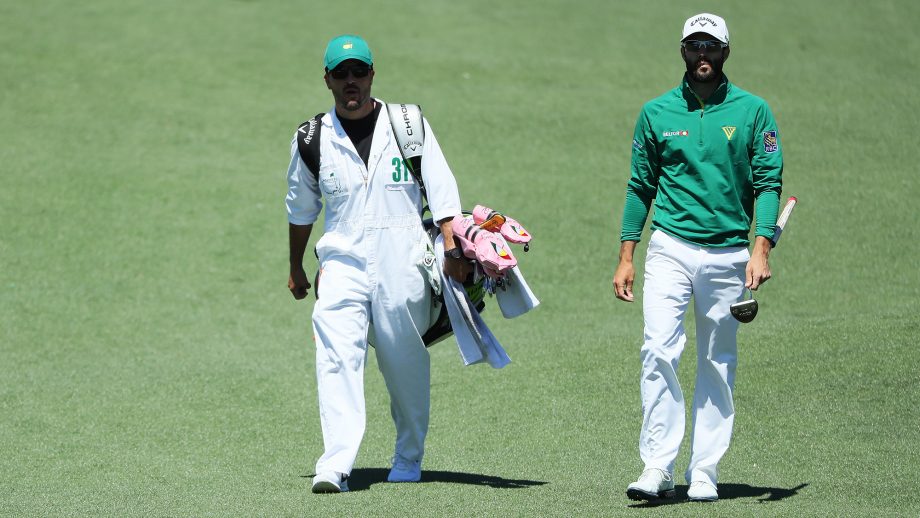 AUGUSTA, GA - APRIL 07: Adam Hadwin of Canada walks with his caddie Joe Cruz on the second hole during the second round of the 2017 Masters Tournament at Augusta National Golf Club on April 7, 2017 in Augusta, Georgia. (Photo by Andrew Redington/Getty Images)

With a whirlwind year behind him, Adam Hadwin feels better positioned to take a second shot at the Masters.

The 30-year-old from Abbotsford, B.C., made his first appearance at Augsta National last year fresh off his first PGA Tour victory in early March – and just before a flurry of events in his personal life that included his wedding.

He ended up finishing tied for 36th, but he believes a more low-key schedule in advance of this week’s tournament will help him to put in a bigger performance.

“The year has flown by,” he said over the phone prior to travelling to Augusta, Ga. “Things have settled down since last March. We’re taking it a bit easier with not as many things going on off the golf course. Things are easier to control and handle but life’s good.”

Thanks to three top-10 finishes, Hadwin has already earned more than US$1.1 million this season. His best result was a tie for third at the CareerBuilder Challenge in January. Hadwin also finished in the Top 30 of the FedEx Cup standings last season.

Although Hadwin didn’t fly to Georgia for a practice round before this week, he said he is playing better overall than at the same point last year and this should help at Augusta National, where golfers need to have all facets of their game in top form.

“You need to hit some good shots, you need to get up and down and you probably need to make some tough five- or 10-foot putts to keep rounds going,” he said. “It’s definitely a plus going in (to the Masters) playing a little better.”

A year ago, he recognized he was struggling with his iron game, but he has tightened that up this year.

“Consistent ball-striking has taken the pressure off some other areas in my game,” he said. “It’s allowed me to stay patient and if I don’t make a few putts here and there, I’ll just keep hitting it well and giving myself chances.”

Mike Weir, who is celebrating the 15th anniversary of his 2003 Masters victory this year, makes up the other half of this week’s Canadian contingent.

Hadwin said he and Weir will play an 18-hole practice round together and will be paired in the Par-3 Contest. The 30-year-old plans to lean on his veteran compatriot for expertise around the Augusta National’s greens, which are notorious for being some of the most difficult on Tour.

Weir, from Bright’s Grove, Ont., was an assistant captain at last September’s Presidents Cup, where Hadwin was a member of the International team. Weir told The Canadian Press in January that he was impressed with Hadwin’s attention to detail, work ethic and “inner fire.”

“He wants to be great,” said Weir at the time.

Ultimately, Hadwin is looking forward to continuing his run of good play and to follow in Weir’s footsteps by becoming the second Canadian to capture an elusive green jacket.

“(My) game is in a really good spot right now,” he said. “I feel like I’m a better player this year than last year, and certainly there are no personal distractions this year heading in. I’ll be more rested and ready to play.”