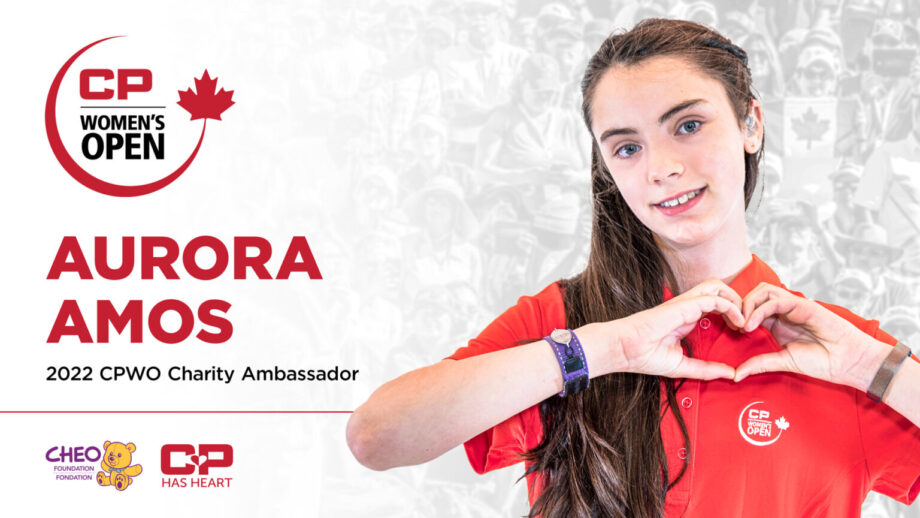 Jackie Roberts-Amos remembers sharply the details of the day she learned about her daughter Aurora’s broken heart. She had been sent to CHEO for a fetal ultrasound 24 weeks into her pregnancy. Ultrasounds were nothing new to Jackie; she already had two young boys at home, a three-and-a-half-year-old and a two-year-old. But this one would be different.

She and her husband, Rob, were seated in a stark room, waiting and wondering. And waiting.

“Dr. Jane Lougheed came into the room, along with a nurse and a social worker,” Jackie recalls. “Nobody brings in a team to give you good news. I just remember looking around for something to brace myself physically. There weren’t any arms on the chair, so I remember grabbing the bottom of my chair to steady myself.”

What followed was a blur. The cardiologist had two diagrams and began with, “This is a normal heart… and this, is your daughter’s heart.”

“Until that moment, I didn’t know that something could be so fundamentally wrong with someone’s heart and that they could survive! We felt helpless. I did everything right during my pregnancy and could not protect my baby from this.”

Aurora was diagnosed with a congenital heart defect called truncus arteriosus type 1. The baby has one large artery, instead of the usual two arteries, for blood flowing in and out of the heart. These babies also have a single truncal valve instead of two valves to control this blood flow. For Aurora, the wall separating the two ventricles never completely closed, leaving a large hole between the two chambers.

The only option: open heart surgery.

“But Aurora has always been feisty,” Jackie says with a smile, recalling when Aurora was in her belly. “After months of hearing the rumbling noises of Aurora moving around, her brothers Liam and Connor were disappointed to learn they were going to have a human sister, and not the baby dragon they had been hoping for,” she says with a laugh.

So, the CHEO team got to work. “It was incredible,” Jackie recalls. “Dr. Lougheed laid out the path.” Aurora would be born at the Ottawa Hospital General Campus and be transported to CHEO, where Dr. Gyandeeo Maharajh would fix her tiny heart.

“Having a plan gave me something to hold on to, to feel a little less lost in the overwhelm,” Jackie says. “Having CHEO meant we didn’t have to move to Toronto, and I could still protect my boys and spend time with them.”

At two weeks of age, Aurora had her first surgery. She would spend most of her first five months at CHEO, except for a short ten days at home, before being readmitted to CHEO for a life-threatening blood infection that required specialized IV antibiotics.

Aurora bounced back and grew into an active kid who loves sports. Limitations weren’t in her playbook. Aurora has had a lot of cardiac catheterizations, a procedure in which a thin, flexible tube is guided through a blood vessel to the heart to diagnose or treat the heart. These tweaks allow more time for her between surgeries. The very nature of her heart condition is not something that is ever truly fixed. She outgrows her previous repairs and new ones need to happen.

She would need another open-heart surgery in 2017. Jackie saw it coming as she noticed Aurora slowing down on the ice while playing hockey, becoming winded and short of breath. They would once again entrust their daughter to Dr. Maharajh, who is beloved by the family.

“We love how he is a man of precision and science, but a spiritual person as well,” Jackie says. “We know there is someone protective in there. It is like he has his own special superpowers. You can tell he is not your average person, but he is so humble and unassuming. He cares and you can feel it.”

Jackie remembers sitting in the cardiology family room while Aurora underwent an 11-hour surgery. “The thing about that room is,” Jackie begins, “The walls are covered with photos of families who have been through it. Those pictures are so reassuring when you’re waiting for that update, waiting for it to be over; they give you hope that it’s going to be OK for you, too.”

Aurora will need at least one more surgery. Jackie and Rob will sit in that room again.

But for now, at age 12 Aurora is thriving. She is a self-described ‘sporty’ kid. Raven haired, with clear blue eyes, she knows what she wants. She stretches herself between school, sports, drawing and being whisked away through the magic of her Harry Potter books. She is a natural athlete and is excited to be the ambassador for the CP Has Heart campaign. She figures it is the perfect segue into learning how to play golf from the absolute best! “I’ve only ever played mini golf,” she says, laughing. “But I want to learn!”

“She’s got this quiet strength and determination,” her mother says. “She focuses on what she needs to do and just goes for it!” All of this happens under the watchful eyes of big brothers Liam and Konnor, now 16 and 14. “Most of the time they treat her like one of the guys,” Jackie laughs. “But then suddenly they become protective of her. They are being cautious with masks and things like that to keep her safe from COVID-19.”

That protection extends to the CHEO family, too. “Dr. Lougheed, the technicians, nurses, the people who book the appointments. Everyone,” Jackie says. “Aurora was never ‘just a patient’ or ‘some procedure’ that you do and move on. We are eternally grateful for that.”

What does CHEO mean to Aurora? “For me, my team takes such good care of me, and I appreciate them all so much. But for our community, CHEO means help for kids. No matter what, we get the specialized care we need, in a place that’s meant just for us.”