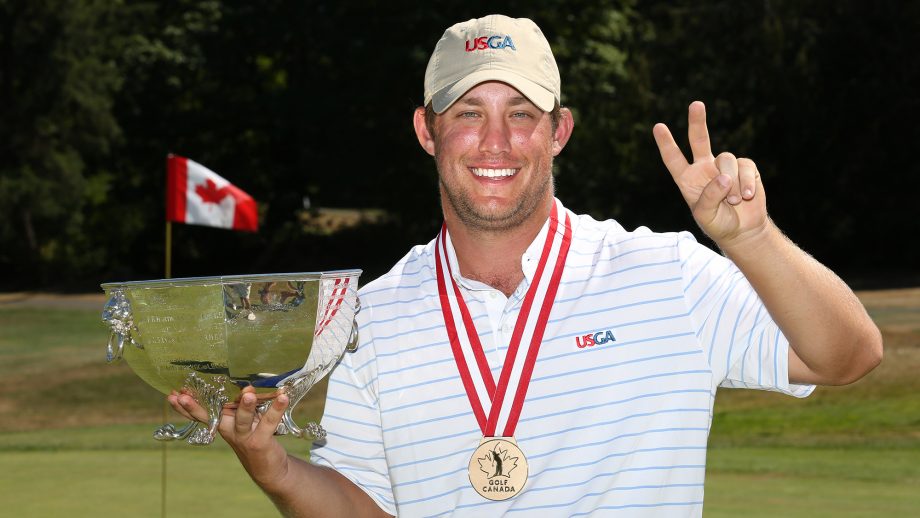 DUNCAN, B.C. – American Zach Bauchou held on in Thursday’s final round of the 114th Canadian Men’s Amateur Championship at Duncan Meadows to become the 13th back-to-back champion in history.

Bauchou, a Forest, Va., native, fired a 5-under 66 in the final round to finish with a three-stroke victory at 18 under par—tying the tournament record set in 1970 by Allen Miller.

“It’s truly an honour to be a back-to-back champion at the Canadian Men’s Amateur—words can’t really express how much it means to me to come up here and defend and play as well as I did,” said the 22-year-old. “I’m truly honoured to win this tournament again.”

For the first time since Monday, Bauchou relinquished the lead to momentarily sit tied at 14 under par with fellow American Philip Knowles, who surged up the leaderboard early with birdies on three of his first four holes.

Bauchou pulled away on the back nine, with a momentum swing on the 15th hole where he sunk a winding birdie putt, while Knowles slipped with a three-putt from inside 10 feet.

“He [Philip] played really well, especially on the front nine, he really putted good,” said Bauchou. “My putt was right in the middle which was really nice – sometimes you need those putts to go in in order to win.”

“I think the feelings are a lot different for me this year,” said Bauchou. “Today I was playing to defend, and you have a little difference in responses and I was a lot less nervous today than I was last year, which was the different this year.”

Knowles closed in solo second at 15 under par. The Jacksonville, Fla., native also shot a 64 in Wednesday’s third round to set the course record.

“Just like that you go from walking up the green, thinking you might get back to all-square to being three down with three to play,” said Knowles, who is entering his senior year at the University of North Florida. “I shot 15 under. You can’t shake your head at that, there’s a lot of circles on the scorecard.”

Elmira, Ont., native Garrett Rank finished in third place at 13 under par, also taking home low Canadian honours in the process. The 30-year-old will return to B.C. from Aug. 21-24 to compete in the Canadian Men’s Mid-Amateur at Victoria Golf Club, where he’ll look to collect his fourth title in five years.

“You’d like to add this one to the resume for sure,” said Rank. “Without sounding arrogant I have won a lot of Golf Canada championships so it would be nice at one point to get one of these.”