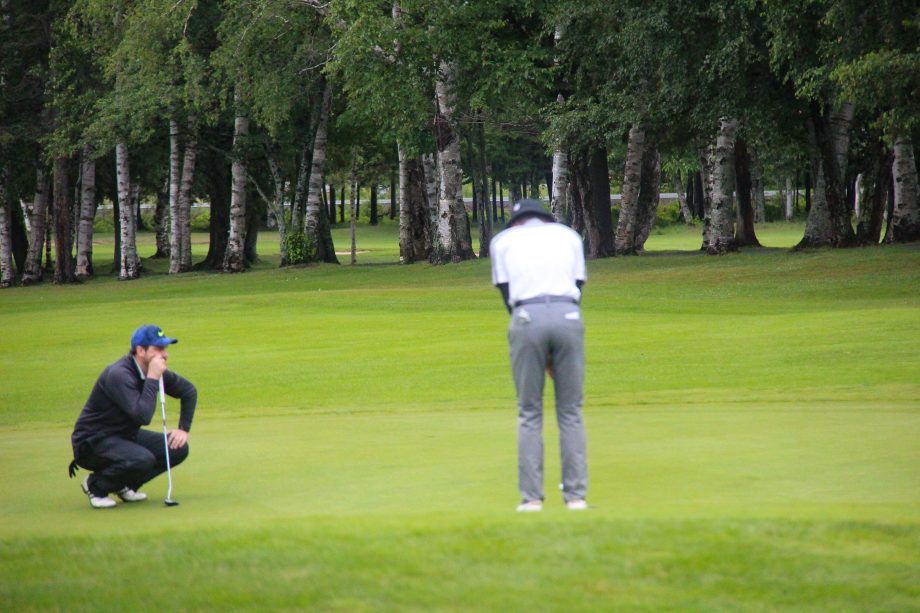 BATHURST, NB– 112 of New Brunswick’s most elite and competitive amateur male golfers take to the field in the 91st playing of the NB Men’s Amateur Championship, Presented by Four Rivers Brewing Co. In addition, for a second consecutive year, the Men’s Amateur also features a Senior Field made up of 38 players.

Friday’s opening round was minutes away from being postponed before Mother Nature decided to ease the conditions and allow the competition to take place.

Leading off the field at the Gowan Brae Golf & Country Club was 2018 and 2020 NB Men’s Amateur & Mid-Amateur Champion, Alex Palmer, alongside 2020 NB Junior Boys Champion, Daniel Kirby. The duo highlight a series of powerhouse pairings as the field features 26 players with plus handicap indexes. Taking to the course immediately after was the three-some of Darren Roach, Stuart Earle, and Stephen Anderson, all of whom have a more than impressive playing resume. Friday mornings’ third pairing featured past champion Michel Landry, Stéphane Boudreau, and Sam Young.

It was the Westfield Golf & Country Club’s Stuart Earle who would get to work early and take advantage of the softer conditions. A superb opening round 67, 5-under would give Earle the clubhouse lead. Heating up on the back nine, Earle would record a 32, 4-under thanks to an eagle on #11 and a three consecutive hole birdie stretch on 14-16. As impressive as it was, Earle’s lead would be short-lived as the Fredericton Golf Club’s Michel Landry would go on to enter the clubhouse minutes letter with an even better 66, 6-under card. The 2002, 2016, & 2019 Champion started off hot with birdies on #1,2,3,5 & 8 on his way to a 31, 5-under front nine, complimented by a 1-under back.

After day 1, a total of 13 players have broken par. Kingswood & Connors Golf’s Stephen Anderson carded a smooth 4-under, 68 to find himself 3rd on the leaderboard. The Riverside Country Club’s Greg Steele sits one shot behind Anderson after an opening-round 3-under, 69. Completing the top-5 of the Men’s Amateur Leaderboard after round 1 is, Michael MacDonald and Sean Wedge of The Riverside Country Club, Simon Richard of Royal Oaks, Eric Coffin of the Fredericton Golf Club, and Darren McPherson of Restigouche who all recorded a 2-under, 70 round on Friday.

The Mid-Amateur Leaderboard looks very similar as Michel Landry holds a 2 shot lead ahead of Stephen Anderson, Riverside’s Greg Steele sits in solo-3rd after his opening-round 3-under, 69.

Round 2 begins on Saturday at 8:00 AM, with the Amateur Players teeing off first in the order of high to low scores from Round 1.