9 different games to play on the golf course 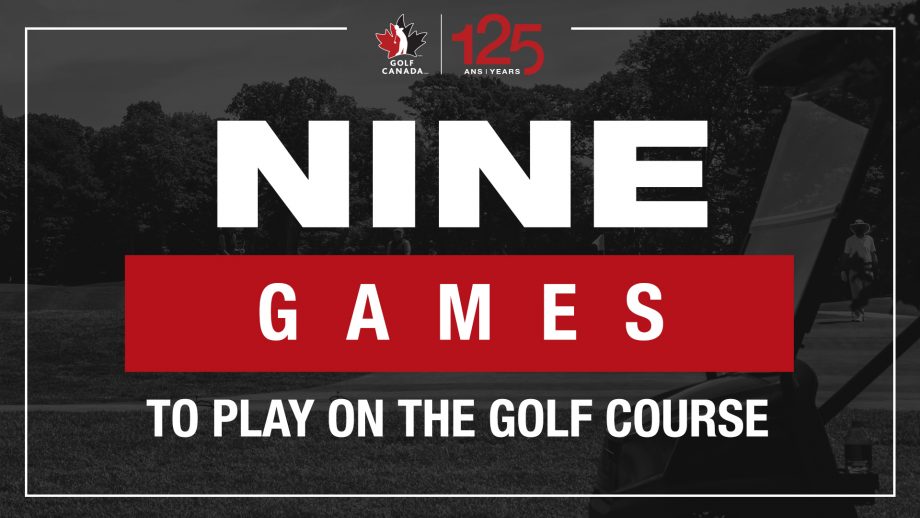 <![CDATA[Golf is both thrilling and maddening, a way to have a singular escape or meet with friends, and a game for a lifetime that can be played by both the health-conscious and those who take it as an opportunity to raise a Steamwhistle and crush a hot dog. But, when you’re looking for something even more for your next 18 holes, we’ve got you covered with an explainer of some fun games you could play with your group. Games played on the course can be as simple as a match against a friend or family member all the way to a complicated tracker of accomplishments (or lack thereof) resulting in, perhaps, a couple of loonies passed between hands. While the <a href="/?p=99418" target="_blank" rel="noopener noreferrer">new Golf Canada app is perfect for posting scores using regular stroke play, we know that not everyone takes to the course to play nine or 18 holes counting all his or her shots. Playing games in a group is way to spice up your usual round. Even for the most experienced golf group, there may be something new below that you’ve never tried! Read on to learn more about some of our favourites.

Otherwise known as ‘foursomes’ this is a completely different kind of golf that North Americans usually only see on TV during the Ryder Cup and Presidents Cup. Trying this out with your friends will a) make you understand why the best players in the world struggle with it and b) maybe make you try to find some new friends, depending on where your partner leaves you to hit from. Alternate shot is, well, that. One player hits then the next player hits from where she or he ended up. It could also be modified to where each twosome hits a drive, you pick the best one, and you alternate shots from there to the hole. Must play with four golfers.

This is a simple match-play format that allows you to play with everyone else in your group and not just a single partner for the duration of the round. The 18 holes are divided up into three six-hole matches and you can use any scoring format you choose. Even if you get defeated soundly in one of your matches, you have two others to try to redeem yourself. Must play with four golfers. If you are riding in carts, the usual format is ‘carts’ (those in the same cart), ‘drivers’ (those who are driving), and ‘opposites’ (a driver and a passenger).

A points-based game, this one takes a little planning and some concentration (perhaps try to find an accountant to play with?) but it’s a dramatic one that makes for some great stories by the time the day is done. There is a ton of other ways to track points and add bonuses to your Wolf game, but here are the basics: Must play with four golfers.

Another fun one that doesn’t need to involve four players, and it’s perfect for golfers who have a higher handicap but still want to get in on the action during a round. It’s another game of points but one that’s wrapped in being ‘first’ to do something. The first player to hit his or her shot onto the green gets a point (Bingo!), the player whose ball is closest to the pin when all balls are on the green gets a point (Bango!), and the first person to hole out gets a point (Bongo!). At the end of the round whomever has the most points wins. Can be played with two, three, or four golfers.

Another team game, this one can get out of hand if you’re applying a monetary value to each point – but it’s a unique twist on a usual ‘scoring’ game. Teams are decided on the first tee and scores are not added, but combined. If Player A makes a 4 and Player B makes a 5 then their score is 45. If Player C makes a 5 and Player D makes a 7, their score is 57 and Team AB wins the hole by 12 points. The lower score always goes to the front of the combined score. Must play with four golfers.

A Best Ball match is just that, and can be combined to any number of other team matchups on the course. Teams of two play straight up, but as the name suggests, the ‘best’ score on the hole counts as the team score. ‘Best Ball’ is not to be confused with a ‘Scramble’ (very popular for family or corporate tournaments) where all four members of a team hit a tee shot and they continue on to hole out by choosing the ‘best ball’ out of the bunch every time. Must play with four golfers.

Golfers apply points (or dollar amounts) to each hole and the lowest score wins the pot. If any two golfers tie the hole then the point or dollar amount carries over to the following hole. Things can add up quick and make the holes later in the round even more exciting! Can play with two, three, or four golfers.

Another opportunity for the higher handicap golfers to earn points against their lower-handicap friends, the Stableford system of scoring is so popular even the PGA Tour uses it for one of their events. Points are applied to scores and the higher the better, in this instance. For example: Three points for an eagle, two points for a birdie, one point for a par, no points for a bogey, and minus-1 point for a double-bogey or worse is a good way to start. Can play with two, three, or four golfers.

Playing a Nassau is the most popular of golf games and the one with the most variations, too. At its simplest, a Nassau is broken out in to three games: low front-nine score, low back-nine score, and low 18-hole score. Dollar amounts or points are applied to each match. Say you were going to play a $5 Nassau, the most you can lose is $15. If you win all three, you win $45 ($15 from the other three players). A popular move when playing Nassau’s is to ‘press’ (basically double-or-nothing on the original bet), which you could do if you were down a few strokes and wanted to try for a late-round charge. Fun add-ons, called ‘junk’ can be added to the original Nassau game. Hit it in the water but still made par? You could add a ‘Fishy’ to your Nassau. Knocked it off a tree but still made par? Congratulations, you made a ‘Barky.’ Chipped in? Well done, you earned a ‘Chippie.’ Golf is a fun enough game as it stands, but over 18 holes and with the same group round after round, there is no shortage of little games you can bring to the course the next time you tee it up.]]>