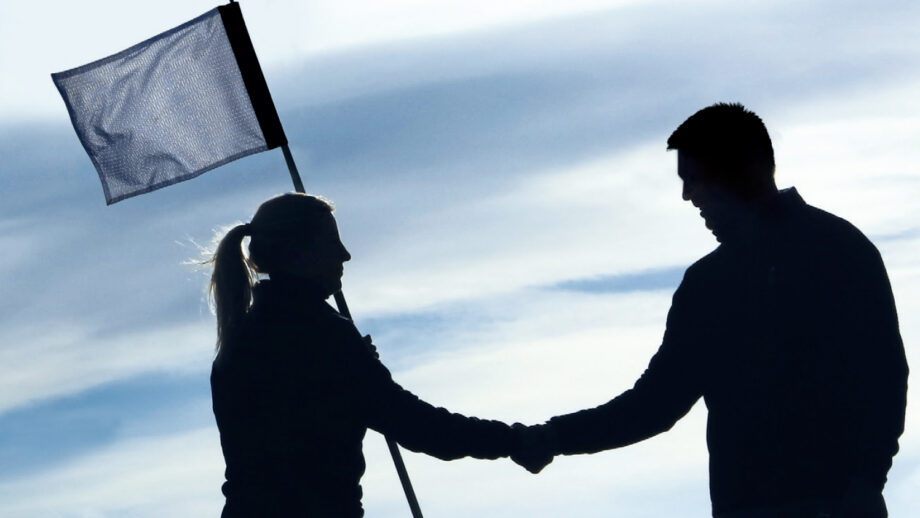 English philosopher Thomas Hobbes famously wrote that, without rules, the game of golf would be “nasty, brutish and short.”

(Or maybe he was referring to society without laws. Whatever. I spent more time on the golf course than in my philosophy class in university.)

One thing I am very clear about is that Mary Beth McKenna is Golf Canada’s Director of Amateur Championships and Rules. With so many new and returning golfers hitting the links these days, she wants to remind everyone that, without rules, the game would be … well, you know.

This doesn’t mean you have to commit the 200 or so pages of the Rules of Golf book to memory or familiarize yourself with the almost 600-page Official Guide to the Rules of Golf (formerly called “Decisions on the Rules of Golf”). We will leave that to the dedicated Rules referees who incessantly study both volumes to ensure that Rules situations in competitions are adjudicated correctly.

For the most part, all we as recreational golfers need to know are the basics. In fact, Rule 1 sums up a lot of what we must understand if we are to respect the game, our fellow golfers and the course.

It is titled “The Game, Player Conduct and the Rules.” The first two sentences go to the core of the sport: “Play the course as you find it and play the ball as it lies. Play by the Rules and in the spirit of the game.” A little later, players are advised to “play in the spirit of the game by acting with integrity …, showing consideration of others …, and taking good care of the course.”

And if you just want to bat the ball around with some friends, that may be all you need. But if you’re playing more competitively, then your knowledge of the Rules must expand proportionately.

McKenna says, at minimum, you must understand at least these three seminal Rules:

This Rule covers how to play a hole—such as the specific Rules for teeing off to start a hole, the requirement to use the same ball for an entire hole except when substitution is allowed, the order of play (which matters more in match play than stroke play) and completing a hole.

Rule 8 (Course Played as It is Found)

This Rule covers a central principle of the game: “play the course as you find it.” When the player’s ball comes to rest, he or she normally has to accept the conditions affecting the stroke and not improve them before playing the ball.

Rule 9 (Ball Played as It Lies; Ball at Rest Lifted or Moved)

This Rule covers a central principle of the game: “play the ball as it lies.” Even if you land in a fairway divot.

“In addition to these three Rules, understanding the definitions is critical to fully understanding the Rules,” says McKenna. The standard Rules book ($5), written in the third person, is available for purchase on the Golf Canada website as is the “Player’s Edition” ($4) which is an abridged, user-friendly set of the Rules with shorter sentences, commonly used phrases and diagrams. Written in the second person, this is intended to the primary publication for golfers.

No doubt the Player’s Edition would help us better comprehend what McKenna suggests are the three most misunderstood Rules of golf: 16, 17 and 18.

This is a specific Rule for penalty areas which are bodies of water or other areas … where the ball is often lost or unable to be played. For one penalty stroke, players may use specific relief options to play a ball from outside the penalty area. “It is important to know the difference between what red and yellow markings mean as they provide different relief options,” she says.

This Rule covers taking relief under penalty of stroke and distance. When a ball is lost outside a penalty area or comes to rest out of bounds, the required progression of playing from the teeing area is broken; the player must resume that progression by playing again from where the previous stroke was made. It also covers how and when a provisional ball may be played to save time when the ball in play might have gone out of bounds or be lost outside a penalty area. McKenna points out that a local Rule may provide an alternative whereby, with a two-stroke penalty, the player may drop a ball “in a large area between the point where the ball is estimated to have come to rest or gone out of bounds and the edge of the fairway of the hole being played that is not nearer the hole.” But, she cautions, this local Rule must be implemented by the course to be in effect.

While most of us only hear about the Rules when there is a controversial situation on the PGA or LPGA tours, they exist for all golfers. Knowing them, even the basics, can save you strokes and help you better understand and appreciate the game and how it is to be properly played. Visit the Golf Canada website today to order your copy of the Player’s Edition of the Rules or view the Rules online. You can even sign up to take the free Online Rules Academy. If you have any questions about the Rules of Golf, you can Ask An Expert at www.golfcanada.ca/ask-an-expert/.

Want to learn more? Here are 20 Rules you should know.

Knowing the Rules can save you strokes, even for the best players in the world.