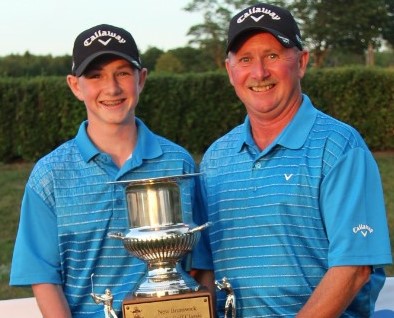 The Family Classic started with the 2nd Annual Jim Connolly Little Swingers division which had a parent play with their 5 – 10 year old son or daughter. They met on the Driving Range for a few exercises and a clinic with Head Professional Don Connolly and our Technical Director, Bari Gourley. From there they played the back nine at Riverside from the Family tees in a Modified Pinehurst alternate shot format. Following their round, they had a 4-hole putting obstacle course to find their way around and Caleb LeBlanc from Fox Creek mastered it with an 11! A burger and fries greeted the players when they finished their golf followed by a prize presentation and candy! Last year’s winners Connor and Scott Weatherhead won again this year after having a par on # 9 after Jack and Jason Snow doubled the final hole. Their final score of 30 was 2 better than their last year’s score.

The start of the Family Classic and Adult Junior commenced this morning with a moment of silence for our two fallen police officers and 2 civilians who were killed in Fredericton on Friday. While the Little Swingers were on the back nine, the rest of the field of players headed out on the front nine under sunny skies. The Family Classic is a wonderful event that names Champions in four divisions which include Father/Son, Father/Daughter, Mother/Son and Mother/Daughter. This is a great event where parents can play with their kids no matter what age and grandparents can play with their grandchildren.  There are not a lot of sports where that can happen.  We also had an Adult/Junior Male awarded today which allows kids without golfing parents to get out to play.  It was wonderful to see 146 golfers come to Riverside to play some golf and have some fun today!!

With the defending champions unable to play this year, the Father/Son Division was wide open, but some past winners were in the field to keep things interesting.  Darren and Nicholas Ritchie of Hampton Golf Club burned their way around the course firing a 1-under 35 on the front nine with birdies on 2, 7 and 8 and bogeys on 3 and 6. Their back nine consisted of 5 birdies on 10, 12, 14, 16 and 17 and a lone bogey on 15 for a 4-under 32 and a 67 total!  Darren had this to say, “I have had a big win here at Riverside in the past but this win with my son is right up there with that one!”. The runner-up position went to Dylan and Danny Fitzherbert who are past champions of this event. They had a very consistent round of an even par 36 on the front and a 1-under par 35 on the back for a very neat 71. There was a tie for third place with an even par 72 and the Shillington duo of Neil and Gregory won in retrogression with a 3-under par 33 on the back nine to go with their 3 over par 39 on the front. Previous winners Jeff and Jake Ward shot their 72 with a 1-over on the front and a 1-under on the back.

With the 4-time winning Father/Daughter duo Greg and Laura Jones from Country Meadows not able to play this year, there was an opportunity for a new winning pair this year out of the 11 family groupings playing in this division.  Instead of somebody new winning the title it was the Father Daughter pair from the past coming back to win. Doug Sullivan owner of Country Meadows and his daughter, Susan, who have won the title 17 times in previous years made up a 3 shot deficit on the front nine to Ed Moore (Kingswood) and Tracy Gallant (Riverside) and fired a 1-under par 35 on the back to win by 2.  Third place went to Dan and Sarah Holt from Gage Golf Club who fired an 81 and won in retrogression to Greg Doucette and Sarah Johnston of Country Meadows.

The Mother/Son Division was won by Carole and Brian Dalrymple who played in this event for the first time while Carole was visiting from Minnedosa Country Club in Southwestern Manitoba. Brian’s father, Miles, played with his grandson Sahil and Brian’s wife Neema played with their other son Rajan making their day a true family Affair. Carole and Brian started with a 41 on the front and were 2 shots back of past winners Debbie and Steve McLaughlin but the Dalrymple’s started to find their rhythm on the back and shot an even par 36 with 2 birdies and a double which was enough to win by 1 over the McLaughlin’s.

The Mother/Daughter Division was once again won by the Fredericton duo of Kathy and Kathryn Meagher who have won the title 5 times in a row and 11 times in total. The ladies had a very solid day out on the course by shooting an 86. They out-dueled Mona Meldrum and Sara Youngner who finished 1-shot back after giving up a 3-shot swing on the 14th hole. Sara and her husband Stephen are visiting from South Carolina and some will remember Sara from her great junior career in NB.

The Adult/Junior Division was won again by Riverside Country Club’s John Elliot who paired with Liam Marin again this year. Each year him and Felipe Marin alternate which Marin boy each will play with but John has had Liam the past 2 years since this was Liam’s last year eligible for this title.  They started out a little rough with a 5-over par 41 but caught fire on the back with a 2-under 34 for a total of 75. Anderson MacDonald was supposed to play with his father but after his Dad put his back out, he asked hockey player Ian Smallwood to play which changed him into the Adult/ Junior Division and came in second with a 37-41 = 78 giving them the runner-up position.

The Riverside Country Club was a fantastic host for this event, the course was in great shape, the sun was shining and everyone had a great time.  Head Professional, Don Connolly was very excited about hosting the event and was happy to see the Jim Connolly Little Swingers Event continue again this year.   General Manager, Jason Porter had this to say, “What a great day and event, so many smiles on the faces of all the participants. This is what golf is all about!” Not many tournaments can you have an 5 year old playing, and three 82 year olds also playing in the same tournament.  Thanks to all the players and especially the kids for putting up with their parents today!