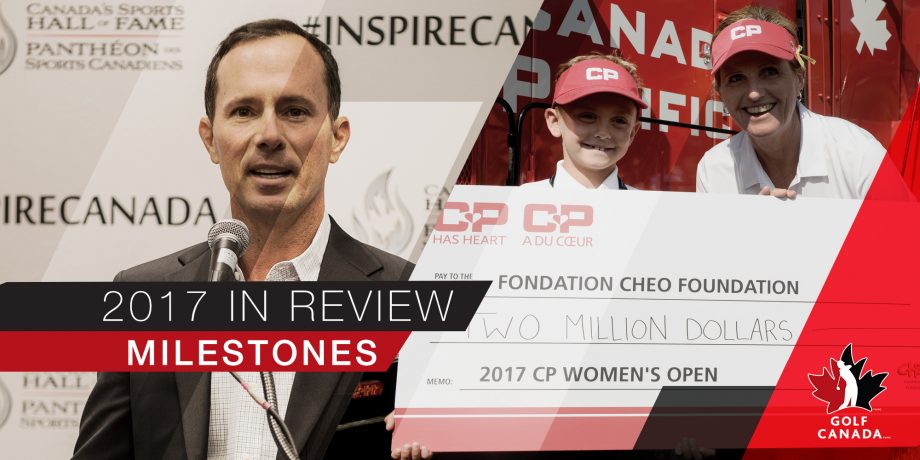 The year 2017 is drawing to a close and what a year it was for Canadian golf. Our pros won literally around the world and on just about every tour imaginable. Our amateurs of all ages made Canada proud at home and abroad. And, off the course, there were significant moments that are well worth memorializing as 2018 looms on the horizon.

This is the third of a three-part series remembering most, if not all, of those memorable moments.(If we’ve unintentionally overlooked any—there were so many, after all!—please let us know on Twitter or Facebook.

Roland Deveau of Nova Scotia returns as president of Golf Canada for a second one-year term.

More on Bob Vokey and Judy Darling Evans, our 2017 inductees into the @CGHF: https://t.co/moub4WZWyb pic.twitter.com/3cTksnSV9B

Mike Weir, a five-time competitor in the event, is named assistant captain of the international team at the Presidents Cup.

Scott Simmons resigns as CEO of Golf Canada after 10 years.

Golf Canada is proud to announce Laurence Applebaum as the organization’s next CEO.

Toronto’s Bruce Mitchell is named the first Canadian to serve as captain of the Royal and Ancient Golf Club of St Andrews.

Golf Canada and the PGA of Canada publish the 2017 Golf Facilities in Canada Report.

Golf Fore The Cure presented by Subaru announces it raised more than $300,000 for breast cancer research through more than 160 events from coast to coast in 2017.

A BIG thank you to all #GolfForetheCure participants for helping us reach $6M raised for breast cancer research??

Following Adopt a School Week, Golf Canada announces an additional 240 school adoptions, representing an additional 28,800 elementary, intermediate and high-school students being introduced to the sport through the Future Links driven by Acura program.

#GolfinSchools totals 240 adoptions to date in 2017 thanks to collective efforts during Adopt a School Week ????

The Canadian Golf Superintendents Association appoints Jeff Calderwood as its executive director, a post he will hold concurrently with his position as CEO of the National Golf Course Owners Association Canada.

Golf Canada announces that in 2018, for the first time, the National Development Squad program will feature a centralized component which will be based out of Bear Mountain Resort in Victoria, B.C.

Kevin Thistle is named CEO of the PGA of Canada to replace the retiring Gary Bernard.

New PGA of Canada CEO Named to Lead Association to a New Era of Success https://t.co/N7lQrg3GYd

A crowd-funding initiative by the Canadian Golf Museum and Hall of Fame raises thousands to digitize and preserve irreplaceable volumes of Canadian Golfer magazine.

Congrats to Mike Weir on his induction into Canada’s Sports Hall of Fame today ?? ?? • ? @cansportshall