Ferguson and Dao Dominate at the Future Links, driven by Acura Atlantic Championship 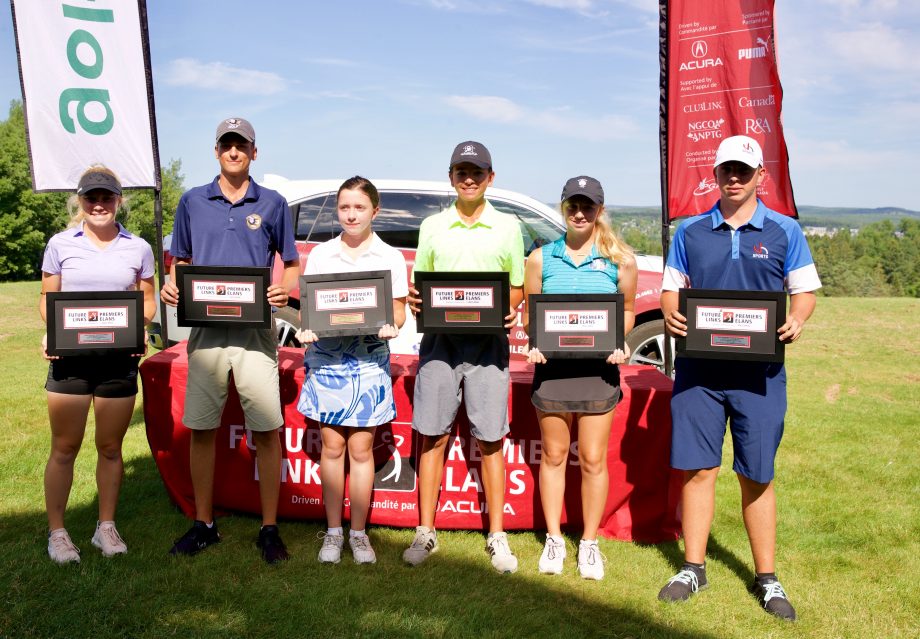 Anyone who says golf isn’t exciting, wasn’t at the Covered Bridge Golf & Country Club in Hartland for the final round of the Future Links, driven by Acura, Atlantic Championship. The champion for the junior girl’s title needed to win in a playoff and the junior boy’s lead changed hands a few times before a champion was named. The tournament had overall good weather, the humidex rose a little on day 1, it avoided thunderstorms threats all day on day 2 and it was sunny, a great temperature with a little breeze on the final day. Good weather always makes for a great tournament.

In the junior girl’s division, Ottawa native, Isabelle Ferguson came to New Brunswick to win a tournament and she did it in style. Overnight leader, Haley Baker saw her lead start to disappear as she struggled on the front nine with a 6-over par 42. Ferguson, who plays out of the Kanata Golf & Country Club shot a 1-under par on her opening nine with birdies on holes # 2 and # 4 and a bogey on #9. That was enough for a 7-shot swing in Ferguson’s favour and Baker’s lead dwindle to 3 shots. Ferguson continued her strong play on the inward nine starting with a birdie on hole # 10 and had pars the next 3 holes as Baker bogeyed holes #12 and # 13 allowing Ferguson to pull even with her.  Another bogey by Baker and a par for Ferguson on the 14th hole gave Ferguson the lead for the first time. Ferguson kept the foot on the accelerator and birdied the next hole and extended her lead to 2. On the tough 16th hole Baker had another bogey and Ferguson managed a par for a three-shot lead with two holes to play. Haley Baker was not giving up the fight and had a birdie on the par 3, 17th hole and Ferguson had her first bogey on the back nine to narrow the lead to one with one hole to play. Haley birdied the final hole and Ferguson settled for a par and they both finished the tournament at 226 to head to a playoff. On the day Baker shot a 42, 38 for an 80 and Ferguson had the low girl’s round of the tournament shooting matching 35’s for a 2-under par 70. They headed back to the first hole to start the playoff and after Ferguson sunk her birdie putt, Baker had her shot to also make birdie but a hard lip-out had her settle for par. Ferguson’s 70 on the day was her best score ever by 4-shots, what a great way to win. She enjoyed playing with the Maritime girls this week and said they were friendly and a lot of fun. Finishing in third place was Haley’s sister, Abby, who shot a 4-over par 76 to finish 5 back of the leaders at 231. Forth place went to Heather McLean from the Ken-Wo Golf Club who also shot a 76 and finished one shot back of McLean at 76.

Summerlea Golf & Country Club and Montreal resident, Malik Dao’s narrow 1-shot overnight lead 4-under par) was erased early when he took a double bogey on the 3rd hole taking him to 2-under par. Daniel Kirby, the home-town favourite and JH Sports member started the day at 3-under par started with 3 straight pars to stay there and take the lead.  Jake Smith of the Ashburn Golf Club in Halifax, who started the day at 1-under par had a birdie on the 3rd hole so he was now tied with Dao. A birdie by Kirby on the 6th hole gave him a 2-shot cushion but that didn’t last long as on hole # 7, Kirby bogeyed and Dao birdied for a 2-shot swing and a tie for the lead once again. Smith had a bogey on the 8th hole to drop to -1 on the day. The 9th hole saw birdies for Kirby and Smith and a par for Dao, that all added up to a 1-under 35’s for Kirby now (4 under for the tournament) and Smith (2 under for the tournament and a 2-over 37 for Dao (3-under for the tournament). The inward nine was just as exciting as a birdie for Smith and bogeys for Kirby and Dao on hole # 10 now saw Kirby and Smith were in the lead at 3-under par and Doe was 2-under at this point. Smith bogeyed a couple of holes coming in to allow Dao and Kirby to battle it out on the rest of the holes. With a birdie on the 13th hole, Kirby took a 2-shot lead on Dao but a birdie on the hole #15 for Doa left him just 1 behind. Disaster struck for Kirby on the always treacherous par 4, 16th hole where he struggled to a double bogey to now trail Dao by a shot. They both made great birdies on the par 3, 17th hole which meant Doa had a 1-shot lead with one hole to play.  Doa parred the final hole and Kirby took a bogey to give Doa the Junior Boys Championship Title with an even par 72 on the day and a 212 total. Kirby was the runner-up with a 1-over par 73 and a 3-day total of 214. Felix-Antoine Levasseur from the Godefroy Club in Nicolet, Quebec shot a 2-under par 70 on the day to finished tied for third-place with Jake Smith who shot even par 72 on the day for a 3-day total of 215.  Levasseur won third place in the tournament by retrogression over Jake Smith. The low round of the day was a 4-under par 68 (6 birdies and 2 bogeys) by Felix Boucher who plays out of Fox Creek Golf Club.

The 82 junior golfers who played at the Future Links, driven by Acura, Atlantic Championship all seemed to enjoy the golf course and the comradery and friendships that the wonderful game of that golf offers. It was amazing to watch these young players hit the golf ball so well and shoot the low scores do. Covered Bridge Golf & Country Club was a wonderful host with the amazing work the golf course maintenance staff, clubhouse staff and volunteers did for the tournament. They get to show off their talents again in a few weeks when they host the Canadian Junior Boys Championships August 10-15th.